Classics in the History of Psychology 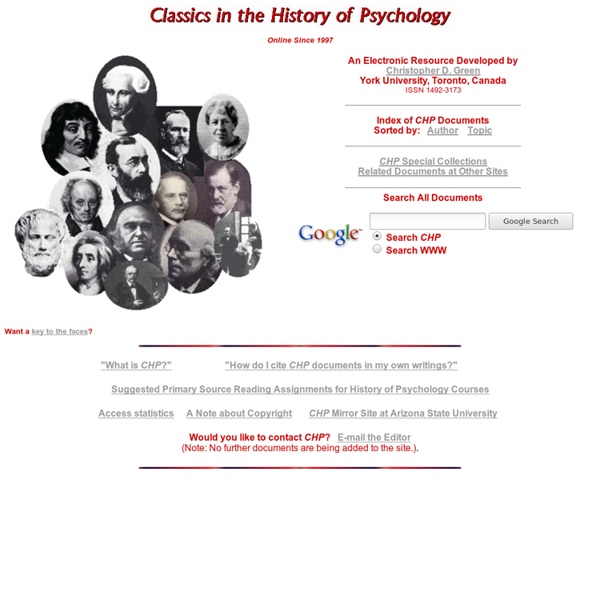 Project Implicit® - Take a Test Whichever IAT you do, we will ask you (optionally) to report your attitudes toward or beliefs about these topics, and provide some general information about yourself. These demonstrations should be more valuable if you have also tried to describe your self-understanding of the characteristic that the IAT is designed to measure. Also, we would like to compare possible differences among groups in their IAT performance and opinions, at least among those who decide to participate. Data exchanged with this site are protected by SSL encryption, and no personally identifying information is collected. Classics in the History of Psychology Classics in the History of Psychology An internet resource developed by Christopher D. Green York University, Toronto, Ontario ISSN 1492-3713

Science - News for Your Neurons Password psychology - Wikipedia In order for a password to work successfully and provide security to its user it must be kept secret and un-guessable; this also requires the user to memorize their password. The psychology behind choosing a password is a unique balance between memorization, security and convenience. Password security involves many psychological and social issues including; whether or not to share a password, the feeling of security, and the eventual choice of whether or not to change a password. Passwords may also be reflective of personality. Those who are more uptight or security-oriented may choose longer or more complicated passwords. Those who are lax or who feel more secure in their everyday lives may never change their password.[1] The most common password is Password1, which may point to convenience over security as the main concern for internet users.[2]

Mind Hacks Søren Kierkegaard (Stanford Encyclopedia of Philosophy) 1. Kierkegaard’s Life Kierkegaard led a somewhat uneventful life. He rarely left his hometown of Copenhagen, and travelled abroad only five times—four times to Berlin and once to Sweden. Posts - Research Blogging Mental Imagery (Stanford Encyclopedia of Philosophy) 1. Meanings and Connotations of ‘Mental Imagery’ Mental imagery is a familiar aspect of most people's everyday experience (Galton, 1880a,b, 1883; Betts, 1909; Doob, 1972; Marks, 1972, 1999). A few people may insist that they rarely, or even never, consciously experience imagery (Galton, 1880a, 1883; Faw, 1997, 2009; but see Brewer & Schommer-Aikins, 2006), but for the vast majority of us, it is a familiar and commonplace feature of our mental lives. The English language supplies quite a range of idiomatic ways of referring to visual mental imagery: ‘visualizing,’ ‘seeing in the mind's eye,’ ‘having a picture in one's head,’ ‘picturing,’ ‘having/seeing a mental image/picture,’ and so on. There seem to be fewer ways to talk about imagery in other sensory modes, but there is little doubt that it occurs, and the experiencing of imagery in any sensory mode is often referred to as ‘imagining’ (the appearance, feel, smell, sound, or flavor of something).