BPS Origins. English is the language of Shakespeare and Chaucer. 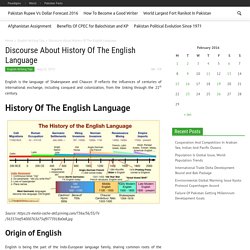 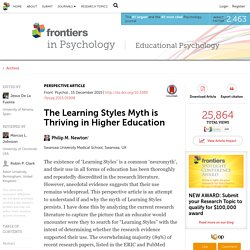 Although this was one in a series of such calls, the very idea of evidence-based education continues to be criticized (e.g., see Biesta, 2010), often on the basis that education is complex (allegedly more so than medicine, to which it is often compared). For example, what does it mean to say that something has ‘worked’, and for whom has it ‘worked’ and in what context? Despite this complexity, there are some concepts in education for which there is abundant clear evidence to show that they are not effective. One of these is Learning Styles, such as the ‘VAK’ classification, which classifies individuals as one or more of ‘Visual, Auditory, or Kinesthetic’ learners (Geake, 2008). Geanium - Interactive chronological visualisation.

TimeRime.com - Homepage. Timeline. Timelines. Timeline creation tools. How to Make a Timeline. The way we think about time is learned. 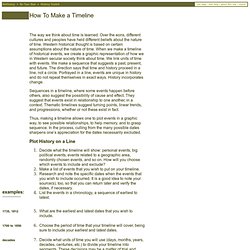 Over the eons, different cultures and peoples have held different beliefs about the nature of time. Western historical thought is based on certain assumptions about the nature of time. When we make a timeline of historical events, we create a graphic representation of how we in Western secular society think about time. We link units of time with events.

We make a sequence that suggests a past, present, and future. Sequences in a timeline, where some events happen before others, also suggest the possibility of cause and effect. Thus, making a timeline allows one to plot events in a graphic way, to see possible relationships, to help memory, and to grasp sequence. Plot History on a Line. Timeline Generator Reviews. How An Amsterdam School Uses Facebook Timeline In History Classes. Students at Het 4e Gymnasium Amsterdam Facebook, despite its massive size, is one of the least talked about social media tools in the education technology world. 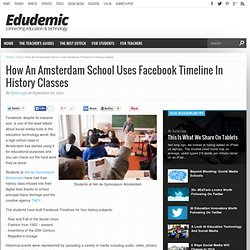 But a high school class in Amsterdam has started using it for educational purposes and you can check out the hard work they’ve done! Students at Het 4e Gymnasium Amsterdam have had their history class infused into their digital lives thanks to school principal Hans Verhage and the creative agency THEY. Royal College of Art - Academia.edu. The thesis analyses the visual space displayed in pictures, film, television and digital interactive media. 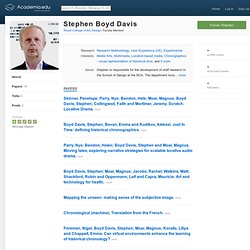 The argument is developed that depictions are informed by the objectives of the artefact as much as by any simple visual... more The thesis analyses the visual space displayed in pictures, film, television and digital interactive media. The Big Human Timeline. Introduction This is a very simple idea, using students to create a human timeline – one student per century from the birth of Christ to today. 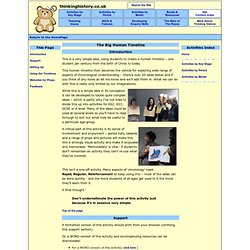 This human timeline then becomes the vehicle for exploring wide range of aspects of chronological understanding – there’s over 20 ideas below and if you think of any more do let me know and we’ll add them in. What we can do with this is really only limited by our imaginations. While this is a simple idea in its conception it can be developed to tackle quite complex ideas – which is partly why I’ve not tried to divide this up into activities for KS2, KS3, GCSE or A level. Many of the ideas could be used at several levels so you’ll have to read through to sort out what may be useful to a particular age-group.

ZoomInfo Cached Page. Timeline. PGCE History at UEA - Time - Welcome. "They know who Queen Victoria was, but they have no idea what century she lived in. They know Napoleon was a general but they have no idea what is meant by the Napoleonic era. Today, few students have any idea what came before or after what. " Anthony Beevor, author of the best selling book, Stalingrad. (Sunday Times, 20 June, 1999) TimeMaps >>. Liliya Korallo. Best Online Collaboration Tools 2012 - Robin Good... Prosopography. In historical studies, prosopography is an investigation of the common characteristics of a historical group, whose individual biographies may be largely untraceable, by means of a collective study of their lives, in multiple career-line analysis.[1] Prosopographical research has the aim of learning about patterns of relationships and activities through the study of collective biography, and proceeds by collecting and analysing statistically relevant quantities of biographical data about a well-defined group of individuals. 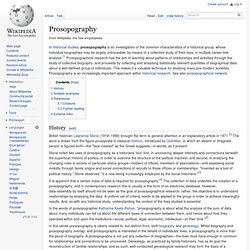 This makes it a valuable technique for studying many pre-modern societies. Prosopography is an increasingly important approach within historical research. Seeing The Bigger Picture – Developing Chronological Understanding. A summary of points made at the London History Forum and at the Northern History Forum 2011/12 These notes address some facets of developing chronological understanding. 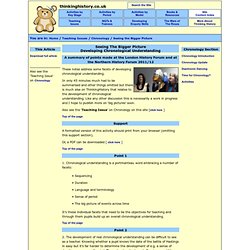 In only 45 minutes much had to be summarised and other things omitted but there is much else on ThinkingHistory that relates to the development of chronological understanding. Like any other discussion this is necessarily a work in progress and I hope to publish more on ‘big pictures’ soon. Learning Theory - Constructivist Approach - Students, Knowledge, Development, and Vygotsky. Constructivism is an epistemology, or a theory, used to explain how people know what they know. 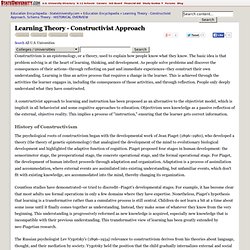 The basic idea is that problem solving is at the heart of learning, thinking, and development. As people solve problems and discover the consequences of their actions–through reflecting on past and immediate experiences–they construct their own understanding. Learning is thus an active process that requires a change in the learner. This is achieved through the activities the learner engages in, including the consequences of those activities, and through reflection. Historical Interactive Timeline Interface. Approach 4 – Making the Industrial Revolution human. It can be hard to make the Industrial Revolution human – the term too easily conjures up images of vast machines or disease-ridden slums populated by hundreds or thousands of people – but not individual human beings that we can relate to. 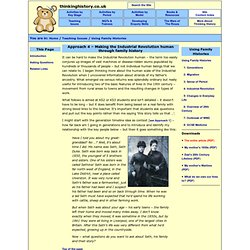 I began thinking more about the human scale of the Industrial Revolution when I uncovered information about strands of my father’s ancestry. What emerged via census returns was splendidly ordinary but really useful for introducing two of the basic features of lives in the 19th century – movement from rural areas to towns and the resulting changes in types of work. What follows is aimed at KS2 or KS3 students and isn’t detailed – it doesn’t have to be long – but it does benefit from being based on a real family with strong blood links to the teacher.

It’s important that students ask questions and pull out the key points rather than me saying ‘this story tells us that …’. The Death of Industry. The mill sequence in the first half of the module was shot at Lister's Mills in Bradford, one of the truly great industrial complexes in Britain, scene of the 1890 strike (see module 'The Rise of Labour') and once boasting a workforce of over 10,000. It's now being turned into chi-chi apartments. The mining sequences were shot at Grimethorpe Colliery - now being extensively re-landscaped - and at the old mining village of South Elmsall in South Yorkshire. South Elmsall was a fiercely proud mining town, and one of the last communities to return to work when the strike was finally broken. Sponsorship Opportunities Timelines.tv is a free-to-view site, dependent for its survival on sponsorship from national, corporate and philanthropic institutions.

Angie's Bio Blog » Constructionist Learning Theory Applications. Dr. Michael Orey described how in the constructionist learning theory students learn most effectively when they are creating an artifact to present to others. (Laureate Education , Inc., 2011). Creating and presenting these artifacts will engage students in their own learning and can make learning more meaningful.