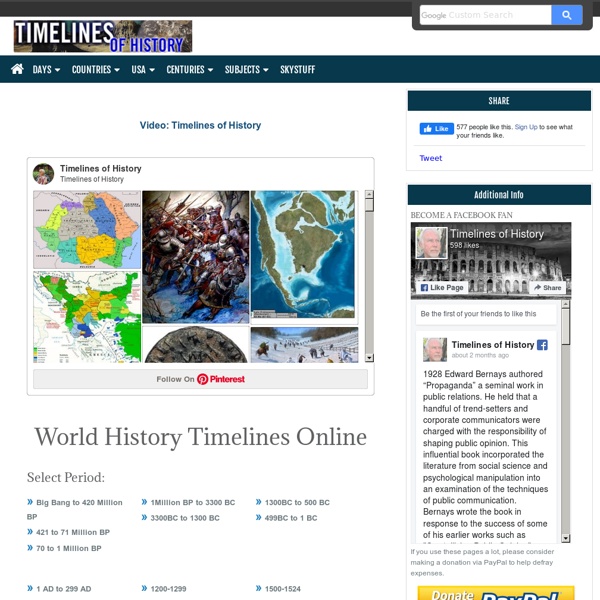 Women's March Is The Biggest Protest In US History As An Estimated 2.9 Million March Millions of Americans have taken to the streets from New York to Los Angeles and everywhere in between as the Women’s Marches on Washington is estimated to be the biggest one-day protest in US history. UConn professor Jeremy Pressman is keeping a running total of crowd estimates across the United States in a Google document. An estimated 60,000 people marched in Atlanta. 250,000 are marching in Chicago. There are estimates of 250,000 people in Boston, and 200,000 more in Denver. In New York, the estimate ranges from 200,000-500,000. Periodis Web - Maps to be Used for the History of Europe Euratlas Periodis Web shows the history of Europe through a sequence of 21 historical maps, every map depicting the political situation at the end of each century. Here, on the left, are 21 mini-maps giving access to 21 full maps and to 84 quarters of maps with more detailed views of the states, provinces and main cities.Moreover, each map offers a historical gazetteer. Thus you can highlight in red each sovereign state and in green each dependent entity. See the Map Legend for more details. Navigation through the atlas is easy: on the left side of the pages, you simply need to choose a century for temporal navigation.

Women’s March Los Angeles draws estimated 750K: ‘This is what we do as Americans’ Fired up by what they call an election cycle that left them insulted and their rights threatened, hundreds of thousands of women — and the men who support them — gathered in downtown Los Angeles on Saturday as part of a nationwide act of solidarity to send a message to President Donald Trump’s administration. An estimated 750,000 people brought that message to L.A.’s packed streets in a loud but peaceful stand for equal rights and a defense of civil liberties. • Live Coverage: Women’s March Los Angeles and other protests

History Map Archive Browse the Map Archive The art and history of cartography, aka mapmaking, goes back to ancient times. Or at least what they thought it could look like. Our English word map derives from the Latin word mappa, meaning napkin or cloth on which maps were drawn. The Map Archive This map collection is indexed chronologically and by continent. Top 100 Tools for Learning 2009 Top 100 Tools for Learning 2009 as at 15 November 2009 This list has been compiled from the contributions of 278 Learning Professionals worldwide, whose individual contributions you can read here Here is a presentation of the Top 100 Tools. Below you can see the full list with links to pages with more information about each of the tools. KEY F = Free, C= Commercial, W = Windows, M=Mac, S=Server, O = Online Cells shaded blue are new tools on the list this year Cells shaded green are tools returning to the list this year

maps home page Down to: 6th to 15th Centuries | 16th and 19th Centuries | 1901 to World War Two | 1946 to 21st Century The Ancient World ... index of places Aegean Region, to 300 BCE Photo: Stefan Ruenzel Crowds of incontestable size spelled out "Resist!!" with their bodies this morning while sitting and standing on the sands of Ocean Beach. The Thousand-Year Graveyard Badia Pozzeveri Churchyard, Altopascio, Italy—On a hot afternoon in July 2012, Giuseppe Vercellotti was digging up bones near the wall of an abandoned medieval church here, thinking about getting a cold drink, when he heard his students call his name. Faces glistening with sweat, they told him that they had found something strange buried half a meter down. Vercellotti took a look and saw a layer of lime, used in ancient times to squelch the stench of rotting corpses. When he tapped the hard layer with his trowel, it sounded hollow. “We immediately thought it was a mass grave,” says Vercellotti, a biological anthropologist at Ohio State University, Columbus, who co-leads a field school here.

21 Brilliant Productivity Tools Every College Student Must Use: Get Degrees If you ask a college student about productivity, he won't have much to say. And you really can't blame him. He leads a dynamic life where academics and fun go hand in hand, with the latter becoming a more important activity most of the times. However, with the advent of internet and web 2.0, a college student now has access to so many amazing tools that he could finish up his work as well as enjoy life to the fullest without the guilt. How much did the Louisiana Purchase actually cost? Wikimedia Commons/White House Historical Association It’s a familiar chapter in our history, part of the triumphant narrative of westward expansion: In 1803, the United States bought a massive chunk of North America, and we got it for a song. Spain had ceded the Louisiana Territory to France, and Napoleon, in turn, offloaded it to American diplomats in Paris after the Haitian Revolution ruined his plans for the New World. Vaguely defined at the time as the western watershed of the Mississippi River, and later pegged at about 827,000 square miles, the acquisition nearly doubled the national domain for a mere $15 million, or roughly $309 million in today’s dollars. Divide the area by the price and you get the Louisiana Purchase’s celebrated reputation as one of the greatest real estate bargains in history. Historians have long known that Indians were paid something for their soil rights, but we’ve never been able to say how much.