Horrible Histories Norman Family Tree Song. Horrible Histories- The Doomsday Book- HD 1080p. The Stormin' Normans (Horrible Histories): Amazon.co.uk: Terry Deary: Books. CBBC - Stormin' Normans. KS3 Bitesize History - The Norman Conquest : Revision, Page 2. Anglo-Saxons for children. When the Romans left Britain, the country was divided up into a lot of smaller kingdoms and sub-kingdoms that often fought with each other and against any invaders who tried to take over. 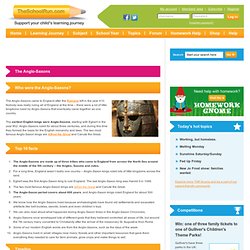 By the 800s, there were four main kingdoms in England: Northumbria, Mercia, East Anglia and Wessex. One of the most well-known kings from Merica was Offa. He declared himself the first ‘king of the English’ because he won battles involving kings in the surrounding kingdoms, but their dominance didn’t really last after Offa died. Offa is most remembered for Offa’s Dyke along the border between England and Wales – it was a 150-mile barrier that gave the Mericans some protection if they were about to be invaded.

Invasion of England, 1066 The Battle of Hastings King Edward of England (called "The Confessor" because of his construction of Westminster Abbey) died on January 5, 1066, after a reign of 23 years. 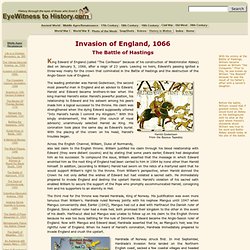 Leaving no heirs, Edward's passing ignited a three-way rivalry for the crown that culminated in the Battle of Hastings and the destruction of the Anglo-Saxon rule of England. The leading pretender was Harold Godwinson, the second most powerful man in England and an advisor to Edward. Harold and Edward became brothers-in-law when the king married Harold's sister. Across the English Channel, William, Duke of Normandy, also laid claim to the English throne. The third rival for the throne was Harald Hardrada, King of Norway. Hardrada of Norway struck first. Construction of the Norman invasion fleet had been completed in July and all was ready for the Channel crossing. Harold rushed his army south and planted his battle standards atop a knoll some five miles from Hastings. History - British History in depth: 1066. 1066. 1066 is considered one of those dates in Medieval England which is difficult to forget. 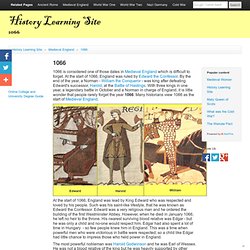 At the start of 1066, England was ruled by Edward the Confessor. By the end of the year, a Norman - William the Conqueror - was king after defeating Edward's successor, Harold, at the Battle of Hastings. With three kings in one year, a legendary battle in October and a Norman in charge of England, it is little wonder that people rarely forget the year 1066.

Many historians view 1066 as the start of Medieval England. At the start of 1066, England was lead by King Edward who was respected and loved by his people. The most powerful nobleman was Harold Godwinson and he was Earl of Wessex. Why does this involve William who before the Battle of Hastings was only the Duke of Normandy and living in France? William claimed that he was the rightful heir to the throne of England despite the fact that he was not English. The matter was further complicated by Harold Hardrada who was king of Norway and Denmark.