Teacher and student resources on multiculturalism, cultural diversity and tolerance 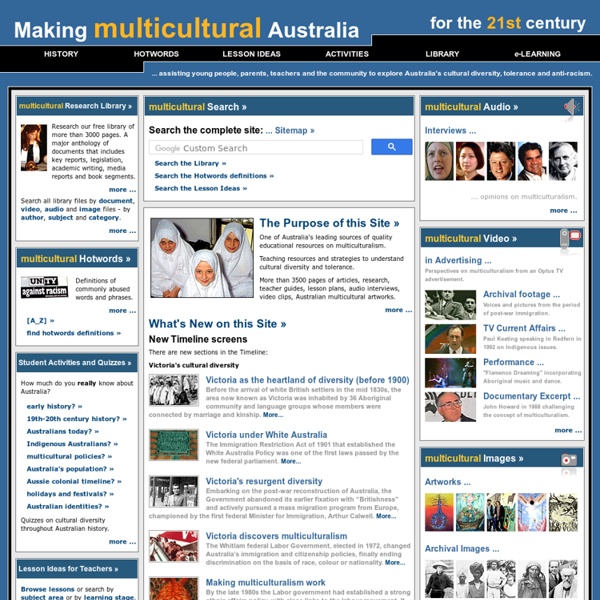 Ramen Data: Mouth to Anus Processed food like ramen noodles and gummy bears are bad for you. Now, for the first time ever, you can see how for yourself. Artist and provacateur Stefani Bardin‘s newest project M2A™:The Fantastic Voyage offers a graphic look at how the gastrointestinal tract (GI) processes a meal of Top Ramen, Gummy Bears and Blue Gatorade versus a meal of hand made noodles, pomegranate/cherry juice gummy bears, and hibiscus gatorade. Bardin worked in collaboration with gastroenterologist Dr. Braden Kuo of Harvard University and Massachusetts General Hospital to launch the first ever clinical study using the M2A™ Capsule (mouth-to-anus) to record video of the digestion process. They also used a SmartPill wireless gastroenterology device to capture rich time, pressure, and pH data of how the GI tract reacts as each kind of food is digested. The goal of this project? Sign up for Food+Tech Connect Bytes to have stories like this one come directly to your inbox.

Live cattle | All exports to Indonesia suspended Live cattle export ban imposed A ship waiting to be loaded with cattle leaves Port Hedland following news of a ban on live cattle exports to Indonesia. P 8, 2011 THE federal government has decided to suspend the export of all live cattle to Indonesia, following a public outcry and a threatened backbench revolt. The Agriculture Minister, Joe Ludwig, signed the order last night and said the ban would stay in place until safeguards had been adopted that would ensure the proper treatment of the beasts along the whole supply chain. The decision to suspend the $318 million-a-year-industry was taken by cabinet on Monday night and has the potential to upset the Indonesians, the cattle industry and the federal opposition, all of which have argued against a blanket ban. "Major change" ... Advertisement Ms Gillard met industry representatives in Darwin last night.

Kids in the kitchen A new initiative that teaches children how to grow and cook their own healthy food is taking off in schools around the country - and the head chef is none other than Stephanie Alexander Twelve-year-old Tim has a black smudge on his nose. It isn’t dirt from the footy field or escaped ink from his school pen. It’s charcoal from the flat breads he has been grilling to go with the garlicky white bean dip he has just prepared. He is one of the lucky children attending Southmoor Primary School in the southern suburbs of Melbourne, one of 27 Victorian schools that participate in Stephanie Alexander’s Kitchen Garden Program, the aim of which is to provide a pleasurable food education for primary school students. The program takes a holistic approach, teaching kids how to grow, harvest, prepare and share food in a school environment, and has been hugely successful. Tim needs little prompting to tell me just how much he enjoys the program’s gardening and cooking classes.

Proof That Not All Food is QUALITY FOOD! « Cody Witt: Real Deal Compost March 28, 2012 by Cody Witt So here is an interesting bit of information for all people interested in the food you eat. Here is proof that there is a difference between conventional food bought at the local store and food grown sustainably in you own garden or if our conventional food was grown sustainably! We bought some peppers from our local “high quality” store and picked some peppers from our own garden. We left both of these peppers to dry naturally and dehydrate. Here are the pictures to prove something is wrong with conventional agriculture. Store bought peppers vs home grown peppers! The key is looking at the mold growth on the store bought peppers vs the home grown peppers. Molded store bought dried peppers! There is a difference in food quality. This shows us that the ways in which conventional food is grown with an emphasis on chemical fertilizers and mass production is not creating quality food for us to eat. Healthy Peppers grown in healthy soil creates long lasting results!

Govs tour Neb. beef plant to see 'pink slime' - The Daily News Online: Food The three governors and two lieutenant governors spent about a half hour learning about the process of creating finely-textured lean beef in a tour of the main plant that makes the product, then blasted the media for scaring consumers with a moniker coined by critics. "If you called it finely textured lean beef, would we be here?" asked Kansas Gov. Sam Brownback. Beef Products, the main producer of the cheap lean beef made from fatty bits of meat left over from other cuts, has drawn scrutiny over concerns about the ammonium hydroxide it treats meat with to change the beef's acidity and kill bacteria. The politicians who toured the plant — Texas Gov. "Why are we here today defending a company that has a rather sterling record dealing with making a food product that is very much needed in this country in a very safe manner? The officials asked about the added ammonia, which Letch said is used as an extra safety precaution against E. "It's lean. "I'm not saying it's perfectly safe.

7 Food Ingredients Most Prone for Food Fraud ROCKVILLE, Md.—Olive oil, milk, honey, saffron, orange juice, coffee and apple juice are the seven most likely food ingredients to be targets for intentional or economically motivated adulteration of food, or food fraud, according to analysis of the first U.S. public database created to compile information on risk factors for food fraud published in the Journal of Food Science. The database was created by the U.S. Pharmacopeial Convention (USP) and provides baseline information to assist interested parties in assessing the risks of specific products. Food fraud is a collective term that encompasses the deliberate substitution, addition, tampering or misrepresentation of food, food ingredients or food packaging, or false or misleading statements made about a product for economic gain. “The vast majority of food fraud is primarily technical and economical," said John Spink, associate director with the anti-counterfeiting and product protection program at Michigan State University.

Blog Archive » Does Your Food Make the Grade? Do you help your parents shop for groceries? If you spend much time in a grocery store — or looking at the foods in your refrigerator and freezer — you’ll notice that some foods have grades. For example, you might see Grade “A” eggs in your refrigerator. Did the eggs have to pass a test? You might also notice that different types of meats have grades, too. What do these grades and terms mean when it comes to the food you eat? The food we eat comes from many different sources. Not all foods are treated in the same way, though. For example, meat (like beef) and poultry (like chicken) are regulated by the United States Department of Agriculture (USDA). The FSIS, however, is not responsible for grading these food products for quality. Grading for quality is done by the USDA’s Agricultural Marketing Service. The number of available grades depends upon the particular food being graded. For beef, you might find several different grades at your local grocery store.

MILKING THE MARKET *UPDATE, July 18, 2012… The National Farmers Federation of Australia is calling for legislation to protect primary producers as proposed in Britain, where the Government is to introduce an independent adjudicator to regulate supermarket-supplier relations. Suppliers say our two big supermarkets Coles and Woolworths are increasingly abusing their market power, hurting hundreds of suppliers and sending many to the wall. The supermarkets have hit back, saying they are acting for consumers to bring down prices and that their dealings with suppliers are reasonable. “Since the supermarket giants provoked concern from regional Australia by drastically cutting milk prices (see story below), the relationship with suppliers has become increasingly sour,” reports ABC News. “Consumer watchdog Choice has long argued the major players have a unique and unprecedented level of control and concentration.” That cheap milk you are buying is cheap for a reason. And I’ve never tasted anything quite so good.

Airplane food tastes strange and here’s why Published in collaboration with The Conversation, a website that features commentary, research and analysis from Australian universities and the CSIRO. Taste is not just determined by the gustatory qualities of the food. It is also substantially influenced by the state of your mouth. Transient changes in our sense of taste are quite common. This can occur with gum and dental disease and mouth problems such as thrush and mucositis associated with a cold/flu or chemotherapy. Contaminated pine nuts may also trigger a persistent unpleasant taste, known as pine mouth. Low zinc levels can also alter our sense of taste. The best dietary sources of zinc are crustaceans, meat and poultry. Strict vegetarians are at increased risk of low zinc levels, partly as they avoid zinc-rich meat and partly as fibre in plants reduces zinc absorption. Changing tastes So what about the food served on a plane? It is well known that reduced atmospheric pressure and lower oxygen levels dull the appetite.

Tracing your food This view is dedicated to those who are interested in giving/getting additional information about the quality of food which have some form of impact on food quality management. The efficiency of quality management and assurance could certainly be greatly improved if information was available/purchased together with the product. Traceability provides a tool for remote quality assurance by finding spots in the value chain that are important with respect to provision of information. Different strategies for exposing information along a value chain can be modeled and implemented. Which strategy to select will depend upon several factors and which type of actor that has stakes in the information quality. Exchange and sharing of traceability information describes different strategies while this section may provide insights about what they actually mean from different viewpoints. Purchasing information along with the product How to avoid repeating costly analysis along the chain

Most foods contain acceptable sulfite levels, FSANZ study shows :: FoodProcessing Most foods contain sulfites at acceptable levels, a recent Food Standards Australia New Zealand (FSANZ) survey has shown. The survey examined sausages, cordials and dried fruit and found that sulfite levels in almost all foods tested were well below those allowed in the Food Standards Code. “The results showed only three sausages, out of 156, had levels above the limits set in the Food Standards Code,” said FSANZ CEO Steve McCutcheon. “These exceedences have been reported to the relevant state or territory agency for follow up.” The survey was conducted as preliminary work on a proposal looking at the use of sulfites, McCutcheon said. Sulfites occur naturally in foods and in the human body, but are also used to preserve food. The Code requires any added sulfites, above a certain level in a food, to be declared on the ingredients list. This information is reproduced with the kind permission of FSANZ. <a href="

Educational resources about multiculturalism and cultural diversity by karenmalbon Jun 11