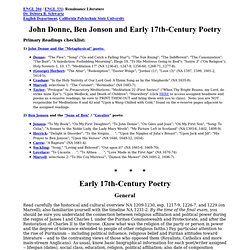 Cavalier poet (English poetry group) - Britannica Online Encyclopedia. A Brief Guide to Metaphysical Poets. The term "metaphysical," as applied to English and continental European poets of the seventeenth century, was used by Augustan poets John Dryden and Samuel Johnson to reprove those poets for their "unnaturalness. 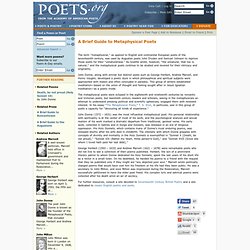 " As Goethe wrote, however, "the unnatural, that too is natural," and the metaphysical poets continue to be studied and revered for their intricacy and originality. John Donne, along with similar but distinct poets such as George Herbert, Andrew Marvell, and Henry Vaughn, developed a poetic style in which philosophical and spiritual subjects were approached with reason and often concluded in paradox.

This group of writers established meditation—based on the union of thought and feeling sought after in Jesuit Ignatian meditation—as a poetic mode. John Donne (1572 – 1631) was the most influential metaphysical poet. George Herbert (1593 – 1633) and Andrew Marvell (1621 – 1678) were remarkable poets who did not live to see a collection of their poems published. The Richard III and Yorkist History Server. {*style:<b>Journals and Libraries | Bibliography Resources for Teachers | Connecting with Scholars </b>*} Students! 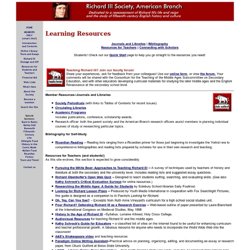 Check out our page to help you go straight to the resources you need! Share your experiences, ask for feedback from your colleagues! Use our , or view Your comments will be shared with the Consortium for the Teaching of the Middle Ages Subcommittee on Secondary Education, and with other educators developing curricular materials for studying the later middle ages and the English Renaissance at the secondary school level.

(with links to Tables of Contents for recent issues) Includes publications, conference, scholarship awards. Research officer: both the parent society and the American Branch research officers assist members in planning individual courses of study or researching particular topics. {*style:<b>(and students!) </b>*} As this site evolves, this section is expected to grow considerably. Designed to teach students surfing, searching, and evaluating skills. --Syllabus. Family Tree for Shakespeare's History Plays. Now take a deep breath: King Edward III had four sons who are important to this saga. 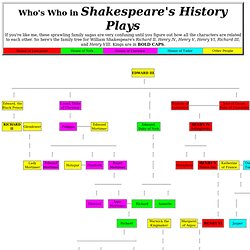 In order of birth they are: Edward, the Black Prince (heir to the throne); Lionel, the Duke of Clarence (shown in purple); John of Gaunt, the Duke of Lancaster (shown in red); and Edmund, the Duke of York (shown in green). They're shown in a different order above for purposes of clarity. Prince Edward dies in battle, and Edward III dies shortly afterward causing the prince's son, Richard II, to become king even though he's still a small child.

His uncles, John of Gaunt (Lancaster) and later Thomas of Woodstock, Duke of Glouster (not shown above) run things until Richard II comes of age. Richard II Richard II is now ruling but not very well. Henry IV, Parts One and Two Since Richard II died without any children, the legal line of succession should have gone to Lionel, the Duke of Clarence, who was the second son of Edward III. Whew! Cavalier Poets: An Introduction. Metaphysical Poets: An Introduction. CCGT.