The Threat to Free Speech, the British Press & Internet

Walking out of consent classes... What's wrong with 'snowflake' students these days? UK floods prove the cynical campaign to force us to abandon feet hasn't worked. Over recent days, as television news has covered the terrible floods, I am reminded yet again of one of the odder misfortunes inflicted on Britain in our lifetime. 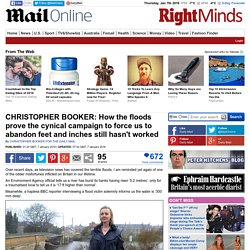 An Environment Agency official tells us a river has burst its banks having risen ‘5.2 metres’, only for a traumatised local to tell us it is ‘17 ft higher than normal’. Meanwhile, a hapless BBC reporter interviewing a flood victim solemnly informs us the water is ‘300 mm deep’. Metric: Environment Secretary Liz Truss - pictured at the scene of a collapsed bridge in Tadcaster, North Yorkshire, last week - said that water levels on the River Aire were ‘a metre higher’ than they have ever been. STEPHEN GLOVER: That airport arrest troubles me. But the Guardian's in murky waters where those who love their country should not venture. By Stephen Glover PUBLISHED: 22:02 GMT, 20 August 2013 | UPDATED: 12:11 GMT, 21 August 2013 When an apparently blameless Brazilian is taken off a plane at Heathrow and questioned for nine hours by seven spooks, who allegedly intimidated him and confiscated his laptop and mobile phone, the reaction of most people is horror and outrage. 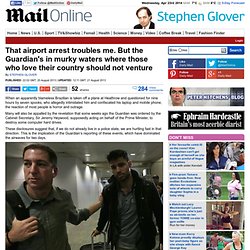 Many will also be appalled by the revelation that some weeks ago the Guardian was ordered by the Cabinet Secretary, Sir Jeremy Heywood, supposedly acting on behalf of the Prime Minister, to destroy some computer hard drives. These disclosures suggest that, if we do not already live in a police state, we are hurtling fast in that direction. This is the implication of the Guardian’s reporting of these events, which have dominated the airwaves for two days. David Miranda, right, pictured with his partner, U.S. journalist Glenn Greenwald, was taken off a plane at Heathrow and questioned for nine hours by seven spooks To begin with, that was also my response. David Miranda's police detention was right says Home Secretary Theresa May. PM asked Sir Jeremy Heywood to warn paper against publishing materialGCHQ later went to Guardian's office and helped staff smash hard drivesWhite House say it is 'difficult to imagine' U.S. government taking that actionIt also emerged Mr Cameron knew in advance David Miranda would be heldHome Secretary Theresa May said police acting in national security interests Rifkind says Guardian editor Alan Rusbridger on 'weak ground''He did not dispute that he had no legal right to possess the files,' he saidDavid Miranda, who was carrying secret CIA files, was held for nine hours Brazilian has said he is launching legal action against the Home OfficeLord Falconer, who helped bring in Terrorism Act 2000, slams decision'I'm very clear that this does not apply to Mr Miranda,' Labour peer said. 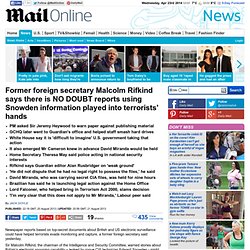 Hacked Off 'are actually mad': Tory Cabinet Minister Oliver Letwin found 'obsessive manner' manner of activists difficult to deal with. So who is funding Hacked Off? Campaign group refuses to name its rich donors despite campaigning for transparency. MPs call on the group to reveal who is funding them - but they are resistingNames of alleged donors are published although some deny involvementThose named include Jeremy Clarkson, Lord Sainsbury and Alain de Botton By Martin Robinson Published: 15:55 GMT, 19 March 2013 | Updated: 17:54 GMT, 19 March 2013 High profile: Hacked Off, which has the backing of Hugh Grant, will not reveal who its top donors are Pressure group Hacked Off is refusing to reveal who is bankrolling them despite campaigning for more transparency in the press. 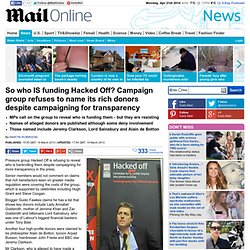 Senior members would not comment on claims that rich benefactors keen on greater media regulation were covering the costs of the group, which is supported by celebrities including Hugh Grant and Steve Coogan. Blogger Guido Fawkes claims he has a list that shows key donors include Lady Annabel Goldsmith, mother of Jemima Khan and Zac Goldsmith and billionaire Lord Sainsbury, who was one of Labour's biggest financial backers under Tony Blair. Hacked Off don't speak for victims insists 7/7 father, who claims the campaign group has 'cosied up to Labour to such an extent that he can't distinguish between them'

The night that proved Labour is the political wing of Hacked Off. By Andrew Pierce Published: 23:38 GMT, 19 March 2013 | Updated: 23:46 GMT, 19 March 2013 For almost three hours, senior figures from the Labour Party, the Lib Dems, and the pressure group Hacked Off wrangled over the detail of the proposed agreement paving the way for the first political regulation of the newspaper industry since 1695. 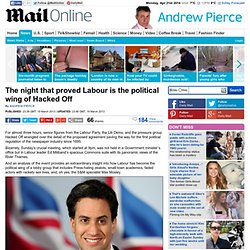 Bizarrely, Sunday’s crucial meeting, which started at 9pm, was not held in a Government minister’s office but in Labour leader Ed Miliband’s spacious Commons suite with its panoramic views of the River Thames. And an analysis of the event provides an extraordinary insight into how Labour has become the political wing of a lobby group that includes Press-hating zealots, small-town academics, faded actors with rackety sex lives, and, oh yes, the S&M specialist Max Mosley. The gathering included Harriet Harman, the deputy Labour leader; Rosie Winterton, Opposition Chief Whip; former Labour Lord Chancellor Lord Falconer; and Nick Clegg. Labour MP attacks 'parasitical Press' as Max Mosley claims new watchdog is a 'win-win' for the public and newspapers.

Jim Sheridan accused journalists of 'hiding behind their pens'But Tory MP Philip Davies attacks Hacked Off of representing people 'who do not like negative publicity'Commons culture committee grilled campaign group after cross-party deal on new regulatorBut major newspaper groups are yet to sign up to the new Royal Charter proposals By Matt Chorley, Mailonline Political Editor Published: 15:44 GMT, 19 March 2013 | Updated: 16:56 GMT, 19 March 2013 Labour MP Jim Sheridan questioned why 'parasitical' journalists are allowed to report from Parliament Labour MP Jim Sheridan today launched an extraordinary attack on the media, demanding to know why the ‘parasitical elements of the Press’ are allowed into Parliament. 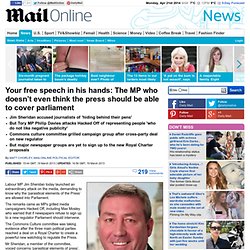 The remarks came as MPs grilled media campaigners Hacked Off, including Max Mosley who warned that if newspapers refuse to sign up to a new regulator Parliament should intervene. Mr Sheridan, a member of the committee, voiced concerns ‘parasitical elements of press’. Oh, what a shambles! Party leaders hail deal on Press but fears grow of threat to free speech. Press watchdog will issue £1m fines and demand front page apologiesBody will be created by Royal Charter instead of being set up by legislationAll three party leaders tried to claim victory after 20 months of wrangling Hacked Off, which represents celebrities and other victims, had four presentNo-one from newspaper industry was informed the talks were taking place By James Chapman and James Slack Published: 07:19 GMT, 18 March 2013 | Updated: 08:38 GMT, 19 March 2013 Compromise: David Cameron told MPs the deal has protected the principle of a free Press from statutory regulation David Cameron, Ed Miliband and Nick Clegg yesterday unveiled a cross-party agreement on Press regulation after ‘shambolic’ all-night talks – only to see the deal immediately opposed by senior Tories and challenged by key elements of the newspaper industry. 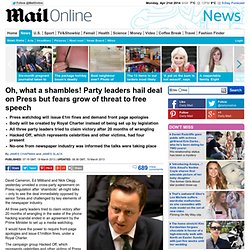 It would have the power to require front-page apologies and issue £1million fines, under a Royal Charter. The Newspaper Society represents 1,100 regional papers. Press regulation: Internet targeted by MPs for first time 'in chilling threat to free speech' Press watchdog to cover websites even if not connected to newspaperForeign sites targeting UK audiences could face huge damages for abusesLawyers say bloggers could also be affected but Government says noFull details on how internet is affected 'still to be confirmed', MPs sayTurmoil as Press signals it will not sign up to new regulatory schemeFinancial Times Editor Lionel Barber attacks plan as 'unsatisfactory'Hacked Off campaigners were present at talks but newspapers were not By James Chapman and James Slack and Martin Robinson and Matt Chorley Published: 08:55 GMT, 19 March 2013 | Updated: 18:55 GMT, 19 March 2013 Compromise: David Cameron told MPs the deal has protected the principle of a free Press from statutory regulation A Press backlash against the Government's plan for a media watchdog underpinned in law intensified today as it emerged that the internet will be targeted for the first time. 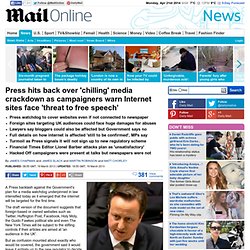 But the greatest confusion surrounded rules governing the internet.