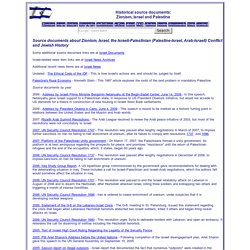 Palestine's Rural Economy - Kenneth Stein - This 1987 article explores the roots of the land problem in mandatory Palestine. Source documents by year 2009 - Address by Israeli Prime Minister Benjamin Netanyahu at the Begin-Sadat Center, June 14, 2009 - In this speech, Netanyahu gave Israeli support to a Palestinian state, in response to US President Obama's initiative, but would not accede to US demands for a freeze in construction of new housing in Israeli West Bank settlements. 2009 - Address by President Obama in Cairo, June 4, 2009 - This speech is bound to be marked as a historic turning point in relations between the United States and the Muslim and Arab worlds. 2001: Who is Osama Bin Ladin? 1975: Harold H. ! Hovevei Tziyon (Covevei Tzion) definition - Zionism and Israel -Encyclopedia / Dictionary/Lexicon of Zionism/Israel/Middle East/Judaism.

'Hovevei Tziyon - (Hebrew) - Associations of proto-Zionist study circles formed in Rumania, Russia, England, USA, France and elsewhere beginning about 1880 and continuing until about 1902 or 1903, when they merged into the Zionist movement. 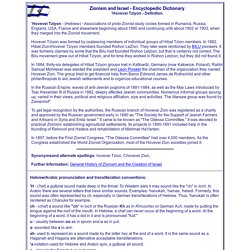 Hovevei Tziyon was formed by coalescing members of individual groups of Hibat Tzion members. In 1882, Hibat Zion/Hovevei Tziyon members founded Rishon LeZion. They later were reinforced by BILU pioneers. The Biltmore Program of the Zionist leadership - 1942. Introduction The 1939 British White Paper had closed Jewish immigration to Palestine and limited or barred land purchases. 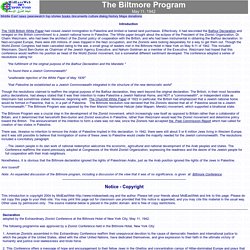 September, 1941 - FDR: Day by Day. Travel Diaries and Scrapbooks of Harrison Forman 1932 - 1973. September, 1941 - FDR: Day by Day. Irish History Timeline. Pembroke Story. The Danish Conquest. 'Unwinding the water's chains': Spring, Thaw, and Some Anglo-Saxon Poems. Three months ago, on 7 November, I looked at some poems marking what was in early medieval calendars considered to be the first day of winter - what one Anglo-Saxon poem calls 'Winter's Day'. 92 days later, we've now reached the first day of spring. 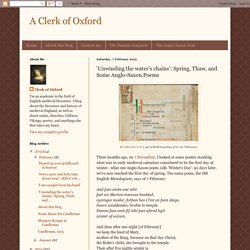 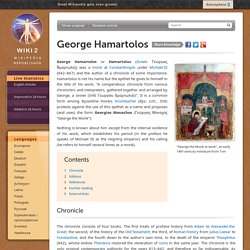 "George the Monk at work", an early 14th-century miniature from Tver George Hamartolos or Hamartolus (Greek: Γεώργιος Ἁμαρτωλός) was a monk at Constantinople under Michael III (842–867) and the author of a chronicle of some importance. Hamartolus is not his name but the epithet he gives to himself in the title of his work: "A compendious chronicle from various chroniclers and interpreters, gathered together and arranged by George, a sinner (ὐπὸ Γεωργίου ἁμαρτωλοῦ)".

It is a common form among Byzantine monks. Krumbacher (Byz. Nothing is known about him except from the internal evidence of his work, which establishes his period (in the preface he speaks of Michael III as the reigning emperor) and his calling (he refers to himself several times as a monk). Chronicle[edit] George describes his ideal and principles in the preface. Who's Who in Medieval History - Chronological Index. HISTORY OF BRITAIN, 407-597, by Fabio P. Barbieri.

Discordia - Towards a Chronology for 5th century Britain by Patrick Rogers. Perhaps no event in 5th Century British history is more obscure than the Discordia or “Quarrel” of Guollop. 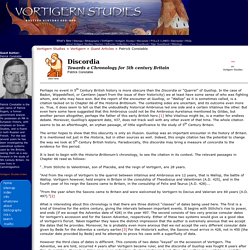 In the case of Badon, Wippedsfleot, or Camlann (apart from the issue of their historicity) we at least have some sense of who was fighting whom, and who may have won. But the report of the encounter at Guollop, or “Wallop” as it is sometimes called, is a citation tacked on to Chapter 66 of the Historia Brittonum. The contesting sides are uncertain, and its outcome even more so. True, it does seem to tell us that the undoubtedly historical Ambrosius led one side and a certain Vitalinus the other. But even here some have suggested that this Ambrosius could not be the Ambrosius Aurelianus mentioned by Gildas, but another person altogether, perhaps the father of this early British hero.[1] Who Vitalinus might be, is a matter for endless debate.

The writer hopes to show that this obscurity is only an illusion. TimelineJS Embed. Guide KB GkS 79 2° Speculum humanæ salvationis (Mirror of Human Salvation) Select Timeline of Writings and Publications. Timeline: 1100-1200. Heritage Route. The son of Charlemagne, Louis the Pious, and his successors, the rulers of Francia Media, visited Nijmegen regularly. 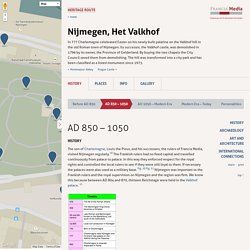 The Frankish rulers had no fixed capital and travelled continuously from palace to palace. In this way they enforced respect for the royal rights and controlled the local rulers to see if they were still loyal to them. If necessary the palaces were also used as a military base. Fig. 10 Fig. 11 Nijmegen was important to the Frankish rulers and the royal supervision on Nijmegen and the region was firm. We know this because between AD 804 and 870, thirteen Reichstage were held in the Valkhof palace. Category:1140s deaths. A Time Capsule. “Here you are, your tiny, little scraps of paper,” teased the YIVO archivist on duty as he set down yet another box of petitions (kvitlekh) addressed to the 19th-century miracle worker Rabbi Elijah Guttmacher. 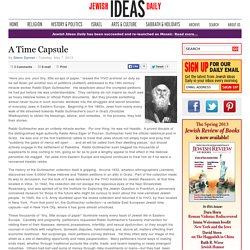 His skepticism about the crumpled petitions he had put before me was understandable. They certainly do not inspire as much awe as hoary Hebrew tomes or official Polish documents. But they provide something almost never found in such sources: windows into the struggles and secret anxieties of everyday Jews in Eastern Europe.