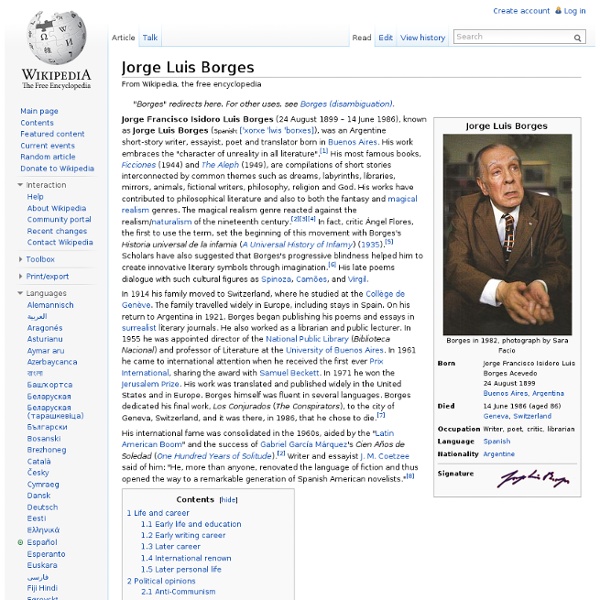 Jorge Francisco Isidoro Luis Borges, KBE (Spanish: [ˈxorxe ˈlwis ˈβorxes] In 1914 his family moved to Switzerland, where he studied at the Collège de Genève. The family travelled widely in Europe, including stays in Spain. On his return to Argentina in 1921, Borges began publishing his poems and essays in surrealist literary journals. He also worked as a librarian and public lecturer. In 1955 he was appointed director of the National Public Library and professor of Literature at the University of Buenos Aires. His international reputation was consolidated in the 1960s, aided by his works being available in English, by the Latin American Boom and by the success of García Márquez's One Hundred Years of Solitude.[6] Writer and essayist J. Life and career[edit] Early life and education[edit] Jorge Luis Borges in 1921 At nine, Jorge Luis Borges translated Oscar Wilde's The Happy Prince into Spanish. Early writing career[edit] Later career[edit] Jorge Luis Borges in the 1940s

Fulton J. Sheen Fulton John Sheen (born Peter John Sheen, May 8, 1895 – December 9, 1979) was an American bishop (later archbishop) of the Roman Catholic Church known for his preaching and especially his work on television and radio. His cause for canonization as a saint was officially opened in 2002. In June 2012, Pope Benedict XVI officially recognized a decree from the Congregation for the Causes of Saints stating that he lived a life of "heroic virtues" – a major step towards beatification – so he is now referred to as "Venerable".[2][3] Ordained a priest of the Diocese of Peoria in 1919,[1] Sheen quickly became a renowned theologian, earning the Cardinal Mercier Prize for International Philosophy in 1923.

Dorothea Dix Dorothea Lynde Dix (April 4, 1802 – July 17, 1887) was an American activist on behalf of the indigent insane who, through a vigorous program of lobbying state legislatures and the United States Congress, created the first generation of American mental asylums. During the Civil War, she served as Superintendent of Army Nurses. Early life[edit] She was born in the town of Hampden, Maine, and grew up first in Worcester, Massachusetts, and then in her wealthy grandmother's home in Boston. She fled there at the age of twelve, to get away from her alcoholic family and abusive father. She was the first child of three born to Joseph Dix and Mary Bigelow, and had deep ancestral roots in Massachusetts Bay Colony.[1] Her father was an itinerant worker.[2][a] About 1821 she opened a school in Boston, which was patronized by the well-to-do families.

Karl Marx Karl Marx[note 1] (/mɑrks/;[4] German pronunciation: [ˈkaɐ̯l ˈmaɐ̯ks]; 5 May 1818 – 14 March 1883) was a German philosopher, economist, sociologist, journalist, and revolutionary socialist. Marx's work in economics laid the basis for much of the current understanding of labour and its relation to capital, and subsequent economic thought.[5][6][7][8] He published numerous books during his lifetime, the most notable being The Communist Manifesto (1848) and Das Kapital (1867–1894). Born into a wealthy middle-class family in Trier in the Prussian Rhineland, Marx studied at the Universities of Bonn and Berlin where he became interested in the philosophical ideas of the Young Hegelians.

Mircea Eliade Noted for his vast erudition, Eliade had fluent command of five languages (Romanian, French, German, Italian, and English) and a reading knowledge of three others (Hebrew, Persian, and Sanskrit). He was elected a posthumous member of the Romanian Academy. Biography[edit] Childhood[edit] Born in Bucharest, he was the son of Romanian Land Forces officer Gheorghe Eliade (whose original surname was Ieremia)[2][3] and Jeana née Vasilescu.[4] An Orthodox believer, Gheorghe Eliade registered his son's birth four days before the actual date, to coincide with the liturgical calendar feast of the Forty Martyrs of Sebaste.[3] Mircea Eliade had a sister, Corina, the mother of semiologist Sorin Alexandrescu.[5][6] His family moved between Tecuci and Bucharest, ultimately settling in the capital in 1914,[2] and purchasing a house on Melodiei Street, near Piața Rosetti, where Mircea Eliade resided until late in his teens.[6]

6 Shockingly Evil Things Babies Are Capable Of You're a good parent. You're doing your best raising your stupid little baby and, so far, you think you're doing a pretty decent job. Then one night, you put your baby in their crib as usual but instead of nodding off they sit up and start beating their head against their crib over and over again. Hard. You're in too much shock to do anything, or maybe you're just kind of a crummy parent and you want to see where your baby's going with this when, after a minute or so, it is all over and your innocent little angel is fast asleep. What the hell just happened?!

Norman Vincent Peale Dr. Norman Vincent Peale (May 31, 1898 – December 24, 1993) was a minister and author (most notably of The Power of Positive Thinking) and a progenitor of "positive thinking". His ideas were not accepted by mental health experts.[1] Twinkie defense The phrase "Twinkie defense" comes from Twinkies, a "food" product known to be high in sugar. Origins[edit] The expression derives from the 1979 trial of Dan White, a former San Francisco, California (U.S.) police officer and firefighter, and until just before the crime, a city district Supervisor. On November 27, 1978, White assassinated Mayor George Moscone and Supervisor Harvey Milk. Paulo Coelho §Biography[edit] Paulo Coelho was born in Brazil[2] and attended a Jesuit school. As a teenager, Coelho wanted to become a writer. i Upon telling his mother this, she responded with "My dear, your father is an engineer.

5 Scientific Reasons Your Idea of Happiness Is Wrong #2. Freedom of Choice Doesn't Always Make You Happier Getty Michael Pollan Michael Pollan (born February 6, 1955)[citation needed] is an American author, journalist, activist, and professor of journalism at the UC Berkeley Graduate School of Journalism.[1] Early years[edit] Pollan was born on February 6, 1955 in Long Island, New York, into a Jewish family.[2][3] He is the son of author and financial consultant Stephen Pollan and columnist Corky Pollan.[4] Pollan received a B.A. in English from Bennington College in 1977 and an M.A. in English from Columbia University in 1981.[5] Career[edit]

Puss in Boots "Master Cat; or, The Booted Cat" (Italian: Il gatto con gli stivali; French: Le Maître Chat, ou Le Chat Botté), commonly known in English as "Puss in Boots", is a European literary fairy tale about a cat who uses trickery and deceit to gain power, wealth, and the hand of a princess in marriage for his penniless and low-born master. The oldest record of written history dates from Italian author Giovanni Francesco Straparola, who included it in his The Facetious Nights of Straparola (c. 1550-53) in XIV-XV. The tale was written at the close of the seventeenth century by Charles Perrault (1628–1703), a retired civil servant and member of the Académie française.[1] Another version was published in 1634 by Giambattista Basile with the title Cagliuso. Plot[edit] The tale opens with the third and youngest son of a miller receiving his inheritance—a cat.

Ezra Pound Ezra Weston Loomis Pound (30 October 1885 – 1 November 1972) was an expatriate American poet and critic who was a major figure of the early modernist movement. His contribution to poetry began with his development of Imagism, a movement derived from classical Chinese and Japanese poetry, stressing clarity, precision and economy of language. His best-known works include Ripostes (1912), Hugh Selwyn Mauberley (1920) and the unfinished 120-section epic, The Cantos (1917–69). Outraged by the carnage of World War I, Pound lost faith in England and blamed the war on usury and international capitalism. He moved to Italy in 1924, and throughout the 1930s and 1940s embraced Benito Mussolini's fascism, expressed support for Adolf Hitler and wrote for publications owned by the British fascist Oswald Mosley.