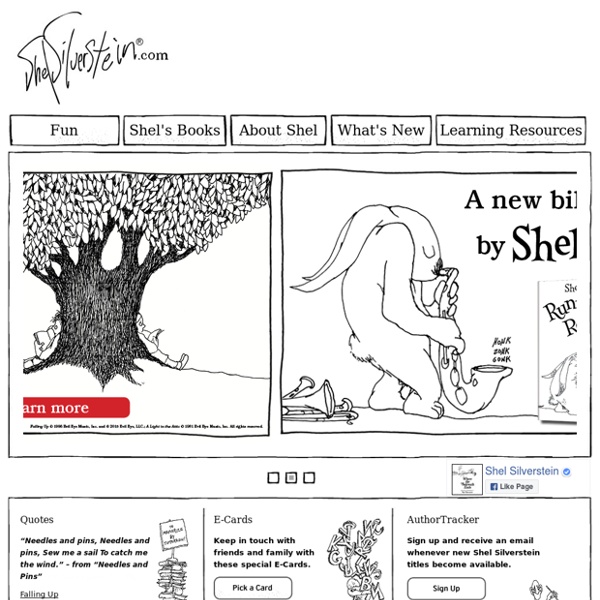 Riddles & Brainteasers - Kids Pages - National Institute of Environmental Health Sciences Scientists get to solve puzzles every day, because science and research involve finding solutions from the clues that we are given. Just like with brainteasers (or brain teasers) and riddles, the answers to science mysteries are not always easy to see at first. With time and effort, they eventually become clear. Authors and Illustrators of Children's Books Where Teachers Come First bookwizardMy Book Lists GO Instant access to reproducibles Downloadable eBooks Authors and Illustrators Biographies, interviews, author and study resources for children's book authors and illustrators

Transworld - Terry Pratchett Larry Finlay, MD at Transworld Publishers: “I was deeply saddened to learn that Sir Terry Pratchett has died. The world has lost one of its brightest, sharpest minds. In over 70 books, Terry enriched the planet like few before him. As all who read him know, Discworld was his vehicle to satirize this world: he did so brilliantly, with great skill, enormous humour and constant invention. Terry faced his Alzheimer’s disease (an ‘embuggerance’, as he called it) publicly and bravely. WORLD'S LARGEST NATURAL SOUND LIBRARY NOW ONLINE - Video The Macaulay Library, with over 150,000 recordings of 9,000 species is now digitised and has been uploaded to an online searchable database. The library, housed at Cornell University’s Lab of Ornithology, has made available over ten terabytes of recordings, with a runtime of 7513 hours of natural sounds. The collection, which began in 1929 has taken researchers dozens of years to accumulate.

Identifying Characteristics - Anansi, the Spider Students watch a video featuring a storyteller who tells a Pourquoi story about Anansi, the Spider, a popular character in African folklore. Following the video, students identify the specific charactertraits of Anansi by completing a character web. Identifying character traits helps students learn and know more about a subject in fictional, non-fictional and visual text. Applying and assigning characteristics can help students develop characters in their own writing. Finally, being able to identify characteristics helps students to better understand how authors treat characters and subjects in a wide range of writing.

Eoin Colfer - Author of Artemis Fowl This site uses some unobtrusive cookies to store information on your computer. Some cookies on this site are essential, and the site won't work as expected without them. These cookies are set when you submit a form, login or interact with the site by doing something that goes beyond clicking on simple links. We also use some non-essential cookies to anonymously track visitors or enhance your experience of the site.

Booked Out Speakers Agency Anne Spudvilas is a multi award-winning illustrator of children’s books. Her work on the picture book version of Mao’s Last Dancer, The Peasant Prince, took her to China with author Li Cunxin. The Peasant Prince won both the NSW and Qld Premiers Awards and CBCA Honor book in 2008. Anne’s work concentrates on portraying character and expression in people in commissioned portraits, courtroom sketching and children’s books. How the Grimm Brothers Saved the Fairy Tale Two hundred years ago, two young German librarians by the names of Jacob and Wilhelm Grimm published a collection of tales that would become one of the most influential works of folklore in Germany, Europe, and eventually the world. Between 1812 and 1857, seven editions of their tales appeared, each one different from the last, until the final, best-known version barely resembled the first. Given that the first edition has recently been honored in bicentenary celebrations throughout the world, it is perhaps a good time to reexamine what we think we know about the original tales of the Brothers Grimm. The stories the Brothers Grimm first collected are brusque, blunt, absurd, comical, and tragic, and are not, strictly speaking, “fairy tales.” In fact, the Grimms never intended the tales to be read by children.