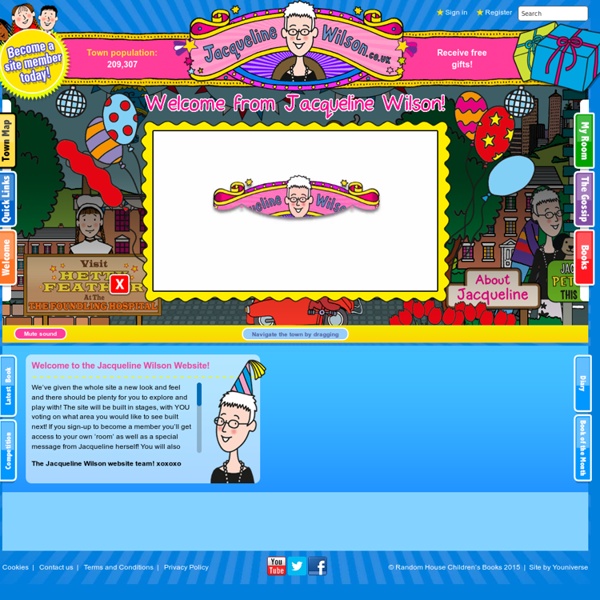 We’ve given the whole site a new look and feel and there should be plenty for you to explore and play with! The site will be built in stages, with YOU voting on what area you would like to see built next! If you sign-up to become a member you’ll get access to your own ‘room’ as well as a special message from Jacqueline herself! You will also receive the Jacqueline Wilson newsletter so you’ll be the first to hear about Jacqueline’s new books, competitions and much more! Hope you enjoy yourself!

Terry Pratchett Larry Finlay, MD at Transworld Publishers: “I was deeply saddened to learn that Sir Terry Pratchett has died. The world has lost one of its brightest, sharpest minds. In over 70 books, Terry enriched the planet like few before him. Julia Donaldson

Michael Morpurgo Illustrated Books The Library Dragon Written by Carmen Agra Deedy Illustrated by Michael P. White When Sunrise Elementary School advertised for a thick-skinned librarian with a burning love of books, Miss Lotta Scales knew she was perfect for the job. Who could guard books better than a REAL dragon? "She kept a fiery eye out to make sure no one removed any books from the shelves....

Home - Beast Quest Alfie by Shirley Hughes - the official Alfie website Drahos Zak Drahos Zak arrived in Australia from the Czech Republic in 1980 after completing a PhD in Illustration and Graphic Design at Charles University, Prague. In Australia Drahos has worked as an Illustrator for various newspapers and magazines, but it is his illustrations for children’s books that have gained him international recognition.

How Shaun Tan transformed children’s literature The king said, “What punishment should someone receive who drags an innocent victim out of bed and throws her into the river to drown?” Sample the FT’s top stories for a week You select the topic, we deliver the news. The stepmother said at once, “That’s a dreadful crime. The murderer should be put in a barrel studded with nails, and rolled downhill into the water.” “Then that is what we shall do,” said the king.