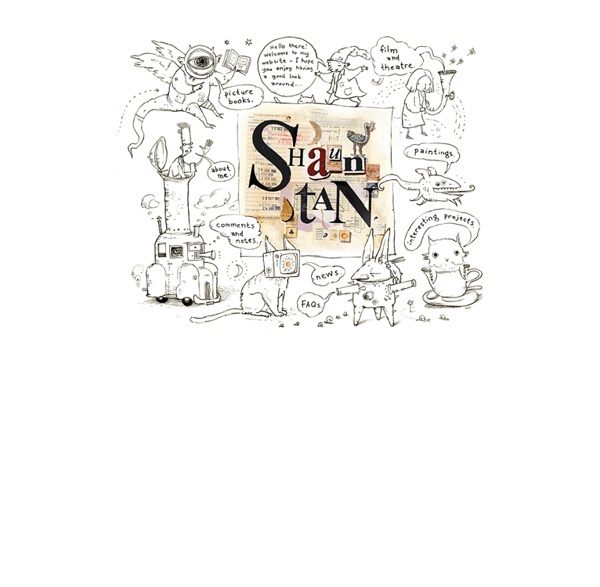 Terry Pratchett Larry Finlay, MD at Transworld Publishers: “I was deeply saddened to learn that Sir Terry Pratchett has died. The world has lost one of its brightest, sharpest minds. In over 70 books, Terry enriched the planet like few before him. Tender Times by Scott C "Pollens" We are so excited to have Scott C. here at Cotton Candy Machine for his first solo show in Brooklyn! Scott's paintings have appeared in galleries and publications around the world. He lives here in Brooklyn now, SO we are couldn't be happier to put on this show with him on his home turf.

Steve Simpson's Illustration Portfolio For a while, as a kid I was fascinated by sign language and spent hours learning it with a friend. To us, it was a secret language only we could understand. I think my best illustrations always have a element of the unpredictable about them, a serendipitous input. Something that wouldn’t normally be associated with the subject. While roughing out my thoughts on the Revolution illustration I’d photographed my own hand (in the traditional fist of defiance pose) for reference.

Postmodern picture book Examples of postmodern picture books include David Wiesner's The Three Pigs, Anthony Browne's Voices in the Park, and Jon Scieszka and Lane Smith's The Stinky Cheese Man. Some books have unusual pictures that don't always mesh with the traditional, linear text (that often matches the pictures). An example would be Bamboozled by David Legge. Frank Serafini (2004) has created lesson plans that lead students to discuss how text interacts with illustrations.

Works - Huang Cheng This project is created by super. the meaning of this project is to record the most important things happened in the past of the world,for someone who was born in this day or dead,super will draw a head portrait on that day and use an easy way to presented,so this is the basic reason she want to creat this project for one year and collect whole 365 celebrities.

Illustrated Books The Library Dragon Written by Carmen Agra Deedy Illustrated by Michael P. White When Sunrise Elementary School advertised for a thick-skinned librarian with a burning love of books, Miss Lotta Scales knew she was perfect for the job. Who could guard books better than a REAL dragon? "She kept a fiery eye out to make sure no one removed any books from the shelves.... Barbara Cooney Barbara Cooney (August 6, 1917 – March 10, 2000) was an American writer and illustrator of more than 200 children's books, published over sixty years. She won two Caldecott Medals, which are awarded to the year's best-illustrated U.S. picture book[1] and a National Book Award. Her books have been translated into 10 languages.[2] For her contribution as a children's illustrator, Cooney was the U.S. nominee in 1994 for the biennial, international Hans Christian Andersen Award, the highest international recognition for creators of children's books.[3][4] Life[edit] Cooney was born on 6 August 1917 in Room 1127 of the Hotel Bossert in Brooklyn, New York,[2] to Russell Schenck Cooney (a stockbroker) and his wife Mae Evelyn Bossert (a painter).

Post-apocalyptic Tokyo scenery 19 Aug 2010 The illustrations of TokyoGenso (a.k.a. Tokyo Fantasy) depict a post-apocalyptic Tokyo devoid of people and overtaken by nature. Shinjuku skyline [+] Tokyo Big Sight [+] Rainbow Bridge [+] More Po-Mo picture books (Picture book roundup 10) I’ve been fascinated with postmodern picture books ever since I took a course in children’s books back in college. Since then I’ve been building up my collection of po-mo picture books, and I’ve now got over 20 of them, mostly from rummaging through bargain bins. I love how po-mo picture books challenge the reader to look at things in a different way, offering an enjoyable experience to both the young reader, the parent reading to the child, and even an older reader randomly picking up the book and flicking through the pages. The multiplicity of meanings also encourages creativity and imagination in constructing the meaning of the text or illustrations, as well as the interest to reread a book. I also marvel at the writers and illustrators’ creativity in taking the craft of picture books one step further, defying convention and structure (In case you missed it, I previously discussed the characteristics of po-mo picture books in the post I did on The Three Little Pigs.)

a selection of graphic projects About this project ----------------------------- Graphic-exchange is an alternative to the "links only" web site, showing you the work of my favourite graphic designers, photographers, artists, designer... I prefer printed material to the web and this is why, over the years, I have proposed a designer's "graphic-exchange". Check this part for full details.

Drahos Zak Drahos Zak arrived in Australia from the Czech Republic in 1980 after completing a PhD in Illustration and Graphic Design at Charles University, Prague. In Australia Drahos has worked as an Illustrator for various newspapers and magazines, but it is his illustrations for children’s books that have gained him international recognition. Cartoon Modern Illustrator Eric Sturdevant has posted some terrific Cliff Roberts illustrations on his blog Fun All Around . Roberts (1929-1996) drew these illustrations for the FORD TIMES in the late-1940s while living in Detroit. Right around the time he made these illustrations, he also began to work in animation at Detroit’s Jam Handy Organization. Gene Deitch writes more about Roberts’s early animation career in his on-line autobiography . The first animated work that Roberts designed at Jam Handy was the industrial film BUILDING FRIENDS FOR BUSINESS (1950).

How Shaun Tan transformed children’s literature The king said, “What punishment should someone receive who drags an innocent victim out of bed and throws her into the river to drown?” Sample the FT’s top stories for a week You select the topic, we deliver the news. The stepmother said at once, “That’s a dreadful crime. The murderer should be put in a barrel studded with nails, and rolled downhill into the water.” “Then that is what we shall do,” said the king.