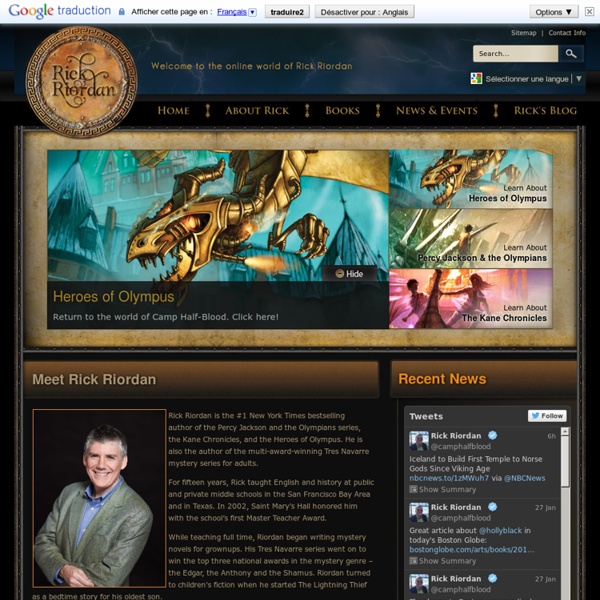 Rick Riordan is the #1 New York Times bestselling author of the Percy Jackson and the Olympians series, the Kane Chronicles, and the Heroes of Olympus. He is also the author of the multi-award-winning Tres Navarre mystery series for adults. For fifteen years, Rick taught English and history at public and private middle schools in the San Francisco Bay Area and in Texas. In 2002, Saint Mary’s Hall honored him with the school’s first Master Teacher Award. While teaching full time, Riordan began writing mystery novels for grownups. His Tres Navarre series went on to win the top three national awards in the mystery genre – the Edgar, the Anthony and the Shamus.

Terry Pratchett Larry Finlay, MD at Transworld Publishers: “I was deeply saddened to learn that Sir Terry Pratchett has died. The world has lost one of its brightest, sharpest minds. In over 70 books, Terry enriched the planet like few before him. Fan Fiction Archive Crossovers Communities Forums BooksPercy Jackson and the Olympians Filters

Mara Dyer Author Lynn Summer Reading Classical High School | Summer Reading 2013 Students entering Grades 9, 10, 11, and 12 This summer, ALL Classical High School students will participate in an all school read. At the bottom of this page you have been provided with a list of academic assignments to be completed and due September . "Eleven Seconds, A Story of Tragedy, Courage and Triumph by Travis Roy with E.M Swift "In this heartfelt testament to the power of love and the strength of the human spirit, Travis Roy, who suffered a devastating injury eleven seconds into his first college hockey game, reveals how he has managed to cope after the accident and, with the help of family and friends, overcome tremendous barriers to begin a new life."

Illustrated Books The Library Dragon Written by Carmen Agra Deedy Illustrated by Michael P. White When Sunrise Elementary School advertised for a thick-skinned librarian with a burning love of books, Miss Lotta Scales knew she was perfect for the job. Who could guard books better than a REAL dragon? "She kept a fiery eye out to make sure no one removed any books from the shelves.... DS Game Preview Enter a world where you play as Percy Jackson and fight with his inherited powers to stop the forces of darkness from destroying the universe. Explore the world to reveal the hidden secrets of Camp Half-Blood, the Underworld, and even Olympus itself! Assemble your perfect team, then match wits and strength against fantastical opponents from the pantheon of Greek mythology, including Medusa, Hydra, and Minotaur! Features

Math Rocks! The Powers of 10 Drahos Zak Drahos Zak arrived in Australia from the Czech Republic in 1980 after completing a PhD in Illustration and Graphic Design at Charles University, Prague. In Australia Drahos has worked as an Illustrator for various newspapers and magazines, but it is his illustrations for children’s books that have gained him international recognition.

IMDB: The Lightning Thief movie How Shaun Tan transformed children’s literature The king said, “What punishment should someone receive who drags an innocent victim out of bed and throws her into the river to drown?” Sample the FT’s top stories for a week You select the topic, we deliver the news. The stepmother said at once, “That’s a dreadful crime. The murderer should be put in a barrel studded with nails, and rolled downhill into the water.” “Then that is what we shall do,” said the king. The Lightning Thief Guide - App Shel Silverstein R.L. Stine

For readers who want official news about Rick Riordan, this is the place to go. In addition to the latest news, it has interviews and a biography, games and a link to Rick's blog. Having Rick's take on the books and characters can cause the reader to alter their view, and perhaps clarify some issues for them. by jnoakes Jan 21