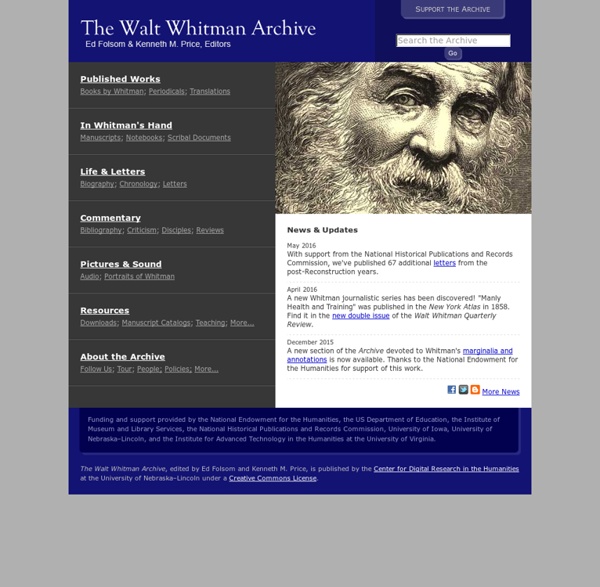 Whitman and Emerson This section of the site includes two letters, one by Emerson and one by Whitman that became a part of the second edition of Leaves of Grass. This exchange began as a private note of encouragement from Emerson, a well-known poet and lecturer, to an obscure journalist at the beginning of his poetic career. The following letter to Whitman from Ralph Waldo Emerson, 21 July 1855 is among the most famous letters ever written to an aspiring writer. Here Emerson suggests the complex foreground that preceded the publication of Leaves of Grass. Without asking Emerson's permission, Whitman gave this private letter to Charles Dana for publication in the New York Tribune on October, 1855. Emerson's letter as well as an open letter to Emerson written by Whitman was then printed in an appendix to the 1856 edition of Leaves of Grass. A Selection of Critical Statements

Emily Dickinson - Biography and Works About Our Emily Dickinson Collection On the left you will find 3 poetry books published by Emily’s family after her death. Many in the academic community feel that these books were poorly edited and are not true to Dickinson’s vision. Emily Dickinson Biography Emily Dickinson (1830-1886), ‘The Belle of Amherst’, American poet, wrote hundreds of poems including “Because I Could Not Stop for Death”, “Heart, we will forget him!” Wild Nights! Among the ranks of other such acclaimed poets as Walt Whitman, Emily Dickinson is considered one of the most original 19th Century American poets. Emily Dickinson was born into one of Amherst, Massachusetts’ most prominent families on 10 December 1830. Emily had an older brother named William Austin Dickinson (1829-1895) (known as Austin) who would marry her most intimate friend Susan Gilbert in 1856. Dark times were soon to fall on Emily. ‘Called Back’: Emily Dickinson died on 15 May 1886, at the age of fifty-six. Biography written by C.D.

When Oscar Wilde Visited Walt Whitman In Camden By by Henrik Eger, Ph.D. A different side of legendary Irish writer Oscar Wilde was recently on display at Walnut Street Theatre in a new play by Michael Whistler entitled Mickle Street. The play revolves around a little known piece of literary history — the period in which the 27-year-old writer traveled to Camden, New Jersey to seek the advice of Walt Whitman. In Mickle Street, we see Wilde’s wit evolve, but many of his words taste like young wine — a fledging writer struggling with his identity, convinced that he has already made it because of the many Americans who are attending his lectures, from New York and Philadelphia, all the way to Colorado — even though the press writes less than flattering reviews. Being associated with famous people was as much en vogue in the late 1800s as it is today. Mary, an Irish-Catholic widow, looks after Whitman. Whistler’s Mary has a fine eye for different layers of reality: “You know the paper says he lives ‘on beauty alone.’

"A Child Said, What Is The Grass?" Poem by Walt Whitman A child said, What is the grass? fetching it to me with full hands;How could I answer the child?. . . .I do not know what it is any more than he. I guess it must be the flag of my disposition, out of hopeful green stuff woven. Or I guess it is the handkerchief of the Lord,A scented gift and remembrancer designedly dropped,Bearing the owner's name someway in the corners, that we may see and remark, and say Whose? Or I guess the grass is itself a child. . . .the produced babe of the vegetation. Or I guess it is a uniform hieroglyphic,And it means, Sprouting alike in broad zones and narrow zones,Growing among black folks as among white,Kanuck, Tuckahoe, Congressman, Cuff, I give them the same, I receive them the same. And now it seems to me the beautiful uncut hair of graves. This grass is very dark to be from the white heads of old mothers,Darker than the colorless beards of old men,Dark to come from under the faint red roofs of mouths. O I perceive after all so many uttering tongues!

s.org - Poetry, Poems, Bios & More - Walt Whitman Born on May 31, 1819, Walt Whitman was the second son of Walter Whitman, a housebuilder, and Louisa Van Velsor. The family, which consisted of nine children, lived in Brooklyn and Long Island in the 1820s and 1830s. At the age of twelve, Whitman began to learn the printer's trade, and fell in love with the written word. Whitman worked as a printer in New York City until a devastating fire in the printing district demolished the industry. He founded a weekly newspaper, Long-Islander, and later edited a number of Brooklyn and New York papers. In 1855, Whitman took out a copyright on the first edition of Leaves of Grass (self-published), which consisted of twelve untitled poems and a preface. At the outbreak of the Civil War, Whitman vowed to live a "purged" and "cleansed" life. Overcome by the suffering of the many wounded in Washington, Whitman decided to stay and work in the hospitals and stayed in the city for eleven years. A Selected Bibliography Poetry Prose Multimedia

Walt Whitman’s Civil War ‘Drum-Taps’, Complete After 150 Years “I intend to move heaven & earth to publish my ‘Drum-Taps’ as soon as I am able to go around,” Walt Whitman told his friend William O’Connor in 1864, after a mysterious illness, likely contracted from the hospital where he nursed soldiers, claimed his health for a time. The American Civil War was in its third year, and Leaves of Grass in its third edition. With his new book of Civil War poems, Whitman meant to advocate a re-union, a reconciliation, an end to the war, and a continuation of the spirit of democracy set in motion by his earlier work. He wanted Drum-Taps to “express in a poem…the pending action of this Time & Land we swim in…with the unprecedented anguish and suffering, the beautiful young men, in wholesale death & agony.” The following January, as the war neared its conclusion, Whitman wrote again to O’Connor, explaining that the now fairly completed Drum-Taps was “superior to Leaves of Grass — certainly more perfect as a work of art.’’

The Perfect High by Shel Silverstein There once was a boy named Gimmesome Roy. Now, Baba Fats was a hermit cat who lived up in Nepal,High on a craggy mountaintop, up a sheer and icy wall."But hell," says Roy, "I’m a healthy boy, and I’ll crawl or climb or fly,But I’ll find that guru who’ll give me the clue as to what’s the perfect high."So out and off goes Gimmesome Roy to the land that knows no time,Up a trail no man could conquer to a cliff no man could climb.For fourteen years he tries that cliff, then back down again he slidesThen sits –– and cries –– and climbs again, pursuing the perfect high.He’s grinding his teeth, he’s coughing blood, he’s aching and shaking and weak,As starving and sore and bleeding and tore, he reaches the mountain peak.And his eyes blink red like a snow–blind wolf, and he snarls the snarl of a rat,As there in perfect repose and wearing no clothes –– sits the godlike Baba Fats. "What’s happening, Fats?" "Why, you jive motherfucker!"

Revisiting Bruce Springsteen's Barbaric Yawp, via Louis CK - Sean Murphy This righteous, eloquent and not uncomplicated rant by National Treasure Louis CK has, rightly, been getting a lot of buzz this week. I’m actually working on a separate piece discussing some of the notions Louis CK (who, in case you weren’t already aware, is a GENIUS) addresses, so stay tuned. The issue of smartphones (in particular) and technology (in general) is one thing, but CK’s diversion into an appreciation of “Jungleland” warrants more mention. Fortunately I already did my homework here. For now, this provides an excellent opportunity to revisit –and celebrate– what might be the best moment from The Boss on the best song from his best album. The original piece, entitled “The Boss, The Big Man and the Best Rock Song of the ’70s” can be found in its entirety HERE. Here is where I celebrate The Big Man: 3.54 – 6.13. HERE is the song. Here is my take. Which brings us back to the Big Man.

Glossary of Poetic Terms Where a poem makes reference to another poem or text. For example, the 14th line of The Prelude by William Wordsworth 'The earth was all before me' alludes to one of the final lines of Paradise Lost by John Milton 'The world was all before them'. Paradise Lost, in turn, alludes to the story of Adam and Eve in Genesis. A poem containing multiple allusions is The Waste Land by T.S.Eliot which makes reference to lines written by Shakespeare, Milton, Spenser, Verlaine, Baudelaire, Marvell, Dante, Webster, St. Allusion should not be confused with plagiarism.See also intertextuality.

The Walt Whitman Birthplace State Historic Site Wilfred Owen Wilfred Owen, who wrote some of the best British poetry on World War I, composed nearly all of his poems in slightly over a year, from August 1917 to September 1918. In November 1918 he was killed in action at the age of twenty-five, one week before the Armistice. Only five poems were published in his lifetime—three in the Nation and two that appeared anonymously in the Hydra, a journal he edited in 1917 when he was a patient at Craiglockhart War Hospital in Edinburgh. Shortly after his death, seven more of his poems appeared in the 1919 volume of Edith Sitwell's annual anthology, Wheels, a volume dedicated to his memory, and in 1919 and 1920 seven other poems appeared in periodicals. Wilfred Edward Salter Owen was born on 18 March 1893, in Oswestry, on the Welsh border of Shropshire, in the beautiful and spacious home of his maternal grandfather. Before Sassoon arrived at Craiglockhart in mid-August, Dr. The nightmare aspect reaches its apogee in “The Show.” C.