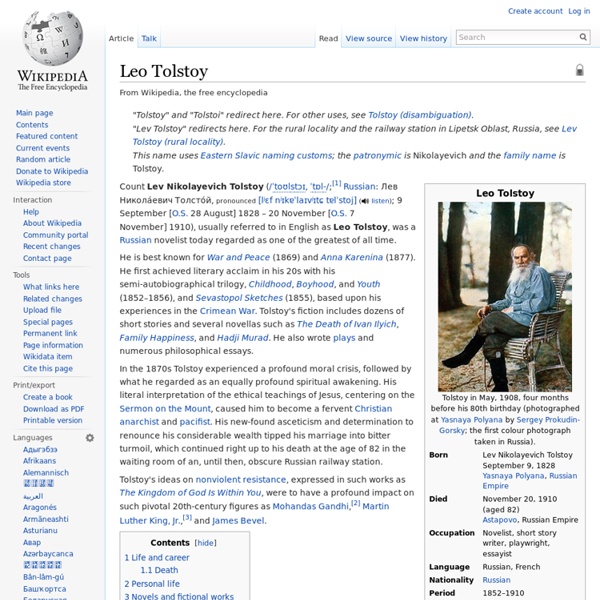 Count Lev Nikolayevich Tolstoy (/ˈtoʊlstɔɪ, ˈtɒl-/;[1] Russian: Лев Никола́евич Толсто́й, pronounced [lʲɛf nʲɪkɐˈlaɪvʲɪtɕ tɐlˈstoj]; 9 September [O.S. 28 August] 1828 – 20 November [O.S. 7 November] 1910), usually referred to in English as Leo Tolstoy, was a Russian novelist today regarded as one of the greatest of all time. In the 1870s Tolstoy experienced a profound moral crisis, followed by what he regarded as an equally profound spiritual awakening. His literal interpretation of the ethical teachings of Jesus, centering on the Sermon on the Mount, caused him to become a fervent Christian anarchist and pacifist. His new-found asceticism and determination to renounce his considerable wealth tipped his marriage into bitter turmoil, which continued right up to his death at the age of 82 in the waiting room of an, until then, obscure Russian railway station. Life and career Death Tolstoy's grave with flowers at Yasnaya Polyana. Tolstoy died in 1910, at the age of 82. Personal life In films

Peter Kropotkin Prince Pyotr Alexeyevich Kropotkin (Russian: Пётр Алексе́евич Кропо́ткин; 9 December 1842 – 8 February 1921) was a Russian zoologist, evolutionary theorist, philosopher, scientist, revolutionary, philologist, economist, activist, geographer, writer, and prominent anarchist. Kropotkin advocated a communist society free from central government and based on voluntary associations between workers. He wrote many books, pamphlets and articles, the most prominent being The Conquest of Bread and Fields, Factories and Workshops, and his principal scientific offering, Mutual Aid: A Factor of Evolution. Biography[edit] Early life[edit] Kropotkin was born in Moscow, into the second-highest level of the Russian aristocracy. "[U]nder the influence of republican teachings," Kropotkin dropped his princely title at the age of twelve, and "even rebuked his friends, when they so referred to him In 1857, at age 14, Kropotkin enrolled in the Corps of Pages at St. Geographical expeditions in Siberia[edit]

Leon Trotsky Leon Trotsky[a] (Russian: Лев Дави́дович Тро́цкий; pronounced [ˈlʲef ˈtrot͡skʲɪj] ( ); born Lev Davidovich Bronshtein;[b] 7 November [O.S. 26 October] 1879 – 21 August 1940) was a Russian Marxist revolutionary and theorist, Soviet politician, and the founder and first leader of the Red Army. After leading a failed struggle of the Left Opposition against the policies and rise of Joseph Stalin in the 1920s and the increasing role of bureaucracy in the Soviet Union, Trotsky was successively removed from power in 1927, expelled from the Communist Party, and finally deported from the Soviet Union in 1929. As the head of the Fourth International, Trotsky continued in exile in Mexico to oppose the Stalinist bureaucracy in the Soviet Union. An early advocate of Red Army intervention against European fascism,[1] in the late 1930s, Trotsky opposed Stalin's non-aggression pact with Adolf Hitler. Before the 1917 Revolution Childhood and family (1879–1895) WikiMiniAtlas Split with Lenin (1903–1904)

Jean-Jacques Rousseau Jean-Jacques Rousseau (/ruːˈsoʊ/;[1] French: [ʒɑ̃ʒak ʁuso]; 28 June 1712 – 2 July 1778) was a Genevan philosopher, writer, and composer of the 18th century. His political philosophy influenced the French Revolution as well as the overall development of modern political, sociological, and educational thought. Biography[edit] Youth[edit] Rousseau was born in Geneva, which was at the time a city-state and a Protestant associate of the Swiss Confederacy. Rousseau was proud that his family, of the moyen order (or middle-class), had voting rights in the city. Geneva, in theory, was governed democratically by its male voting "citizens". There was much political debate within Geneva, extending down to the tradespeople. The house where Rousseau was born at number 40, Grand-Rue. The trade of watchmaking had become a family tradition by the time of Rousseau's father, Isaac Rousseau. He and his older brother François were brought up by their father and a paternal aunt, also named Suzanne.

Immanuel Kant Immanuel Kant (/kænt/;[1] German: [ɪˈmaːnu̯eːl kant]; 22 April 1724 – 12 February 1804) was a German philosopher who is widely considered to be a central figure of modern philosophy. He argued that fundamental concepts structure human experience, and that reason is the source of morality. His thought continues to have a major influence in contemporary thought, especially the fields of metaphysics, epistemology, ethics, political philosophy, and aesthetics.[2] Kant's major work, the Critique of Pure Reason (Kritik der reinen Vernunft, 1781),[3] aimed to explain the relationship between reason and human experience. Kant argued that our experiences are structured by necessary features of our minds. Kant aimed to resolve disputes between empirical and rationalist approaches. Biography[edit] Immanuel Kant was born in 1724 in Königsberg, Prussia (since 1946 the city of Kaliningrad, Kaliningrad Oblast, Russia). Young Kant was a solid, albeit unspectacular, student. Young scholar[edit] [edit]

Adam Smith 18th-century Scottish moral philosopher and political economist Adam Smith FRSA (16 June [O.S. 5 June] 1723[4] – 17 July 1790) was a Scottish economist, philosopher and author as well as a moral philosopher, a pioneer of political economy and a key figure during the Scottish Enlightenment,[5] also known as ''The Father of Economics''[6] or ''The Father of Capitalism''.[7] Smith wrote two classic works, The Theory of Moral Sentiments (1759) and An Inquiry into the Nature and Causes of the Wealth of Nations (1776). The latter, often abbreviated as The Wealth of Nations, is considered his magnum opus and the first modern work of economics. In his work, Adam Smith introduced his theory of absolute advantage.[8] Smith studied social philosophy at the University of Glasgow and at Balliol College, Oxford, where he was one of the first students to benefit from scholarships set up by fellow Scot John Snell. Smith laid the foundations of classical free market economic theory. Biography[edit]

John Adams John Adams (October 30 [O.S. October 19] 1735 – July 4, 1826) was the second president of the United States (1797–1801),[2] having earlier served as the first vice president of the United States. An American Founding Father,[3] Adams was a statesman, diplomat, and a leading advocate of American independence from Great Britain. Well educated, he was an Enlightenment political theorist who promoted republicanism, as well as a strong central government, and wrote prolifically about his often seminal ideas, both in published works and in letters to his wife and key adviser Abigail Adams, as well as to other Founding Fathers. Adams' revolutionary credentials secured him two terms as George Washington's vice president and his own election in 1796 as the second president. In 1800, Adams was defeated for re-election by Thomas Jefferson and retired to Massachusetts. Early life Susanna Boylston Adams was a member of one of the colony's leading medical families, the Boylstons of Brookline.[9][10]

Thomas Jefferson Thomas Jefferson (April 13 [O.S. April 2] 1743 – July 4, 1826) was an American Founding Father, the principal author of the Declaration of Independence (1776) and the third President of the United States (1801–1809). He was a spokesman for democracy, embraced the principles of republicanism and the rights of man with worldwide influence. At the beginning of the American Revolution, he served in the Continental Congress, representing Virginia and then served as a wartime Governor of Virginia (1779–1781). Just after the war ended, from mid-1784 Jefferson served as a diplomat, stationed in Paris. Jefferson was the first United States Secretary of State (1790–1793) serving under President George Washington. Elected president in what Jefferson called the Revolution of 1800, he oversaw the purchase of the vast Louisiana Territory from France (1803), and sent the Lewis and Clark Expedition (1804–1806) to explore the new west. Early life and career Education Marriage and family Monticello

John Locke John Locke FRS (/ˈlɒk/; 29 August 1632 – 28 October 1704), was an English philosopher and physician regarded as one of the most influential of Enlightenment thinkers and known as the "Father of Classical Liberalism".[1][2][3] Considered one of the first of the British empiricists, following the tradition of Sir Francis Bacon, he is equally important to social contract theory. His work greatly affected the development of epistemology and political philosophy. His writings influenced Voltaire and Rousseau, many Scottish Enlightenment thinkers, as well as the American revolutionaries. His contributions to classical republicanism and liberal theory are reflected in the United States Declaration of Independence.[4] Life and work Locke's father, also called John, was a country lawyer and clerk to the Justices of the Peace in Chew Magna,[6] who had served as a captain of cavalry for the Parliamentarian forces during the early part of the English Civil War. Influence Constitution of Carolina

Murray Rothbard A heterodox economist,[18][19] Rothbard refused to publish in academic journals.[20] According to economist Jeff Herbener, who calls Rothbard his friend and "intellectual mentor", Rothbard received "only ostracism" from mainstream academia.[21] Rothbard rejected mainstream economic methodologies and instead embraced praxeology. To promote his economic and political ideas, Rothbard joined Llewellyn H. Rockwell, Jr. and Burton Blumert in 1982 to establish the Ludwig von Mises Institute in Alabama. Life and work[edit] Education[edit] Murray Rothbard's parents were David and Rae Rothbard, Jewish immigrants who had immigrated to the U.S. from Poland and Russia respectively. Rothbard in the mid-1950s He attended Columbia University, where he received a Bachelor of Arts degree in mathematics in 1945 and, eleven years later, his PhD in economics in 1956. Marriage, employment and activism[edit] Rothbard with his wife "Joey" Conflict with Ayn Rand[edit] Ethical and philosophical views[edit]