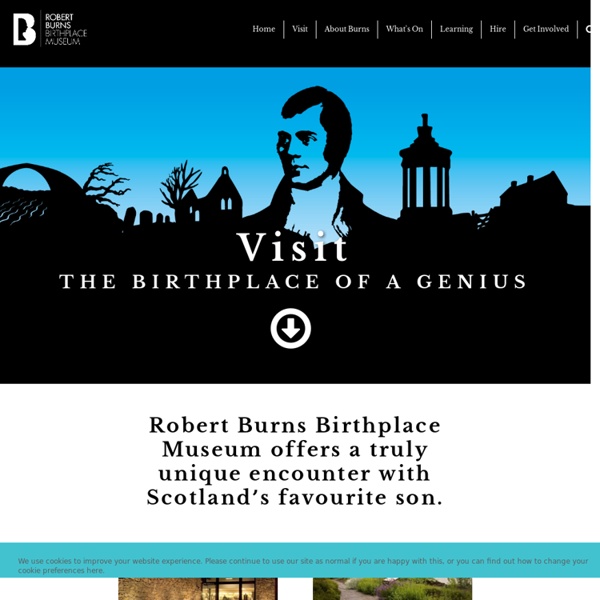 Undiscovered Scotland: Home Page Sir John Soane's Museum - London The Culzean Experience With its dramatic clifftop setting, Robert Adam architecture, fascinating history and beautiful surroundings, it's easy to see why Culzean Castle is one of Scotland’s most popular visitor attractions. Surrounded by Culzean Country Park, a 242 hectare estate encompassing lush woodland, landscaped gardens and rugged coastline, this 18th-century Scottish castle couldn’t be better placed for a family day out. You could easily spend an entire day exploring the country park alone, but with so many treasure-filled rooms to see inside the castle, it’s well worth making time to enjoy both elements of this magnificent historic attraction. Discover the history of Culzean Castle through an exciting multimedia tour for iPhone and iPad. Download it from the App Store here. Culzean Castle is also one of the best places in Scotland to look out for bats.

Robert Burns - Ellisland was Burns' home in Dumfries and Galloway, Scotland Just a thought… - The Anti Arty Farty Party So there’s a possibility that membership of the EU will, after all, be debated in Westminster and might — I’ll believe it when I see it — be put to a referendum. …which got me thinking (I know, I know). Anyway, Call me Dave has stated that he wants the UK to stay in the EU and the result of any referendum would not be binding on Westminster. Is that true for the Scots? My understanding is that the UK is a Parliamentary Democracy with sovereignty held by the Crown in Parliament — that is, the people are not sovereign. So if the UK holds a referendum on this issue how can they disregard the opinion of voters in Scotland? I don’t know, I’m only asking and perhaps someone out there might elucidate for me. BTW I personally believe that when Scotland does become independent (very soon I hope) that we don’t continue membership of a pointless and expensive political union and seek to be members of EFTA and EEA instead.

Moma Wales Are Racecourse Robert Burns: Alexandria Burns Club Information on the Scottish Poet David Cameron wants Scotland to remain in UK 3 October 2011Last updated at 17:28 David Cameron says he is a passionate believer in the union David Cameron said he wanted Scotland to stay in the union but accepted the decision was one for its people alone. His comment came in a BBC interview in which he was asked about a future referendum on Scottish independence. The Tory leader said he was a passionate supporter of the UK and he wanted to see Scotland stay inside it. Mr Cameron, who is attending his party's annual conference, also said he would happily work with any one of the four Scots Tory leadership candidates. On the issue of the union, Mr Cameron said it was a decision for the people of Scotland to take. He added: "I want to keep Scotland in the UK. "I think when they [voters] are asked, I do believe they would like to stay in the UK. Continue reading the main story “Start Quote Prime Minister well briefed by advisers. End QuoteFrom twitter - @TimReidBBC Tim ReidWestminster correspondent, BBC Scotland

BBC Two - Writing Scotland - Robert Burns Scotland and Norway: a special relationship? | Andrew Boyle It always seemed too good to be true. And today it is all too easy to ridicule Alex Salmond for his vision of a far northern "arc of prosperity", flexing from Reykjavik down to Dublin then across Scotland to Oslo: when the Celtic Tiger was flattened on the road like any other poor moggy, Salmond's drive towards independence for Scotland seemed to falter. But only long enough for Salmond to realign his focus. The pinpoint of his gaze is now directed with laser beam concentration on the country he has often described as the ideal model for a modern Scotland. The Scottish market for Norway's gas has become hugely important to Oslo. In the last decade, malt whisky clubs have spread across Norway like a virulent rash, retail sales of single malts doubling in the same period. Part of the answer was supplied last Friday, when Norwegian publishing house Cappelen Damm held a party to launch the first popular study of Shetland, Orkney, and the Hebrides.