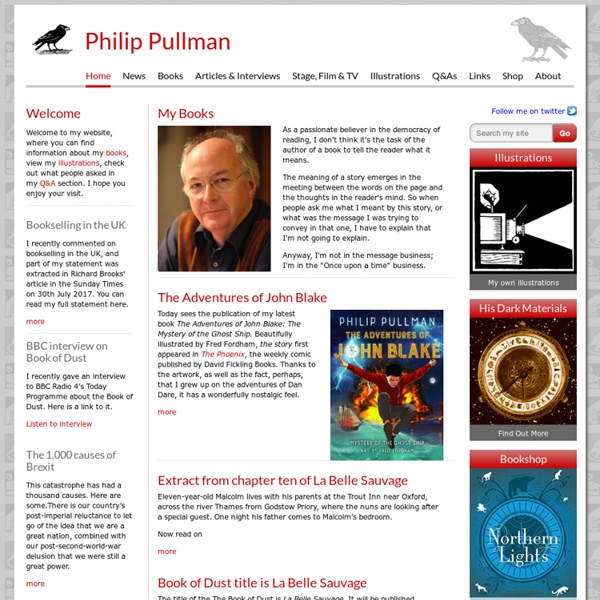 On my website you can find information about my books, view my illustrations, check out what people asked in my Q&A section. The shop contains all my books available for you to buy. I hope you enjoy the website. Philip Right: Some illustrations from His Dark Materials

Terry Pratchett Larry Finlay, MD at Transworld Publishers: “I was deeply saddened to learn that Sir Terry Pratchett has died. The world has lost one of its brightest, sharpest minds. In over 70 books, Terry enriched the planet like few before him. As all who read him know, Discworld was his vehicle to satirize this world: he did so brilliantly, with great skill, enormous humour and constant invention. Terry faced his Alzheimer’s disease (an ‘embuggerance’, as he called it) publicly and bravely. Over the last few years, it was his writing that sustained him.

Julie Kagawa Julie Kagawa, the New York Times bestselling author of the Iron Fey and Blood of Eden series was born in Sacramento, California. But nothing exciting really happened to her there. So, at the age of nine she and her family moved to Hawaii, which she soon discovered was inhabited by large carnivorous insects, colonies of house geckos, and frequent hurricanes. She spent much of her time in the ocean, when she wasn’t getting chased out of it by reef sharks, jellyfish, and the odd eel. When not swimming for her life, Julie immersed herself in books, often to the chagrin of her schoolteachers, who would find she hid novels behind her Math textbooks during class.

Illustrated Books The Library Dragon Written by Carmen Agra Deedy Illustrated by Michael P. White When Sunrise Elementary School advertised for a thick-skinned librarian with a burning love of books, Miss Lotta Scales knew she was perfect for the job. Who could guard books better than a REAL dragon? Author & Illustrator This was posted 2 days ago. It has 344 notes. some tests that Joe Schmidt and I did a few months back. Not for anything specific but they were really fun. This was posted 1 month ago. It has 1,177 notes. Drahos Zak Drahos Zak arrived in Australia from the Czech Republic in 1980 after completing a PhD in Illustration and Graphic Design at Charles University, Prague. In Australia Drahos has worked as an Illustrator for various newspapers and magazines, but it is his illustrations for children’s books that have gained him international recognition.

How Shaun Tan transformed children’s literature The king said, “What punishment should someone receive who drags an innocent victim out of bed and throws her into the river to drown?” Sample the FT’s top stories for a week You select the topic, we deliver the news. The stepmother said at once, “That’s a dreadful crime. The murderer should be put in a barrel studded with nails, and rolled downhill into the water.” Author & Ilustrator Half the earth's surface is covered by water more than a mile deep, but most of this watery world is a mystery to us. In fact, more people have stood on the surface of the moon than have visited the deepest spot in the ocean. Come along as we travel down, down, down, from the surface to the bottom of the sea.