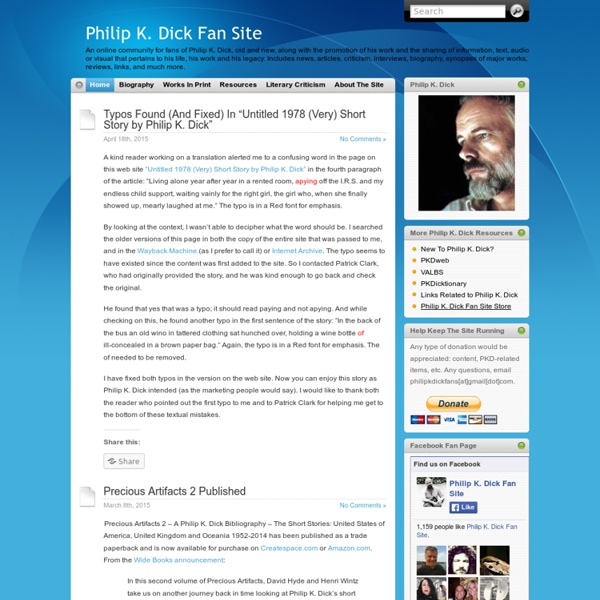 Philip K. Dick Bibliography · It's all about his books Philip K. Dick Bibliography Philip K. Dick's World The Lucky Dog Pet Shop in Berkeley When I see these stories of mine, written over three decades, I think of the Lucky Dog Pet Store. There's a good reason for that. Philip K. His house on Francisco st in Berkeley (then and now) House were he lived in the late 50'. His house in San Rafael House (left and right images) in San Raphael, CA where PKD lived from 1968 to 1972 where the events that inspired in "A Scanner Darkly" took place. The Record store where he worked in Berkeley Rasputin Music, formerly University Music, record store on Telegraph Ave in Berkeley where PKD worked as a clerc. Scenery from the novel Confessions of a Crap Artist Discover the places described in the mainstream novel "Confessions of a Crap Artist" including the house where PKD lived in Point Reyes Station, CA

Scriptorium - Philip K. Dick By Richard Behrens & Allen B. Ruch Philip K. Dick was a complex man about whom many things can be said. Immensely talented, he was arguably a genius; and yet he was deeply troubled all his life. But perhaps above all, Philip K. But Dick had little presentiment that he would one day have such an audience. So it’s not hard to imagine that Dick himself would be shocked to find that in the two decades after his death in 1982, his popularity has only increased. The reason why Philip K. Highly personal and occasionally quite idiosyncratic, Philip K. Philip Kindred Dick was born in Chicago on December 16, 1928 along with a twin sister named Jane Charlotte Dick. The changing information which we experience as world is an unfolding narrative. In this sad demonstration of his obsession with his dead twin, Dick also cleverly reveals the motive and methods of his own writing process. Dick’s parents divorced when he was six. As a teenager, Philip K. The Man In The High Castle earned Philip K.