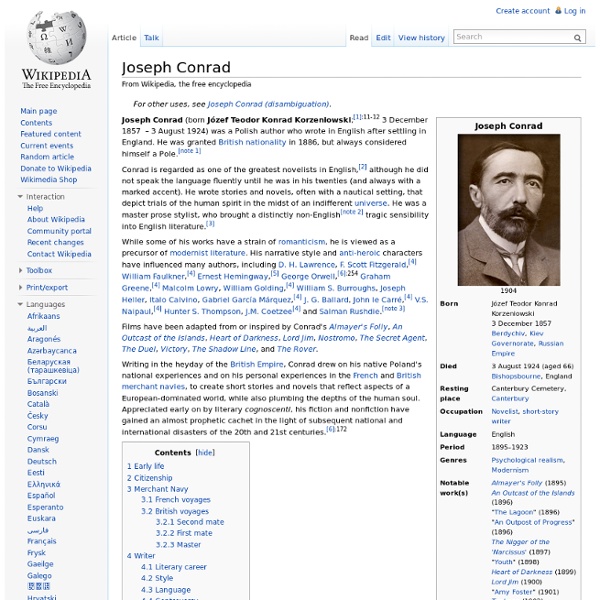 Joseph Conrad (born Józef Teodor Konrad Korzeniowski;[1]:11–12 Berdichev, Imperial Russia, 3 December 1857 – 3 August 1924, Bishopsbourne, Kent, England) was a Polish author who wrote in English after settling in England. He was granted British nationality in 1886, but always considered himself a Pole.[note 1] Conrad is regarded as one of the greatest novelists in English,[2] though he did not speak the language fluently until he was in his twenties (and always with a marked accent). He wrote stories and novels, often with a nautical setting, that depict trials of the human spirit in the midst of an indifferent universe. He was a master prose stylist who brought a distinctly non-English[note 2] tragic sensibility into English literature.[3] While some of his works have a strain of romanticism, his works are viewed as modernist literature. Early life[edit] Nowy Świat 47, Warsaw, where three-year-old Conrad lived with his parents in 1861 Apollo did his best to home-school Conrad.

Intellectual An intellectual is a person who primarily uses intelligence in either a professional or an individual capacity. As a substantive or adjective, it refers to the work product of such persons, to the so-called "life of the mind" generally, or to an aspect of something where learning, erudition, and informed and critical thinking are the focus.[citation needed] The intellectual is a specific variety of the intelligent, which unlike the general property, is strictly associated with reason and thinking. Traditionally, the scholarly and the intellectual classes were closely identified; however, while intellectuals need not necessarily be actively involved in scholarship, they often have an academic background and will typically have an association with a profession. Intellectuals include not only philosophers, interested in epistemology, but also others in the arts and sciences, plus the humanities, with no boundaries as to fields of study. Terminology and endeavours[edit] Men of letters[edit] C.

Ayn Rand Literary critics received Rand's fiction with mixed reviews,[6] and academia generally ignored or rejected her philosophy, though academic interest has increased in recent decades.[7][8][9] The Objectivist movement attempts to spread her ideas, both to the public and in academic settings.[10] She has been a significant influence among libertarians and American conservatives.[11] Life[edit] Early life[edit] Rand was born Alisa Zinov'yevna Rosenbaum (Russian: Али́са Зиновьевна Розенбаум) on February 2, 1905, to a Russian Jewish bourgeois[12] family living in Saint Petersburg. She was the eldest of the three daughters of Zinovy Zakharovich Rosenbaum and his wife, Anna Borisovna (née Kaplan), largely non-observant Jews. The subsequent October Revolution and the rule of the Bolsheviks under Vladimir Lenin disrupted the life the family had previously enjoyed. Along with many other "bourgeois" students, Rand was purged from the university shortly before graduating. Early fiction[edit] [edit]

Ithaca, New York Namgyal Monastery in Ithaca is the North American seat of Tenzin Gyatso, the 14th Dalai Lama.[5] History[edit] Early history[edit] The inhabitants of the Ithaca area at the time Europeans began arriving were the Saponi and Tutelo Indians, dependent tribes of the Cayuga Indians who were part of the Iroquois confederation. These tribes settled on Cayuga-controlled hunting lands at the south end of Cayuga Lake as well as in Pony (originally Sapony) Hollow of Newfield, New York, after being forced from North Carolina by European invasion. They were driven from the area by the Sullivan Expedition which destroyed the Tutelo village of Coregonal, located near the junction of state routes 13 and 13A just south of the Ithaca city limits. Partition of the Military Tract[edit] The growth of Ithaca, village and city[edit] State Street in Ithaca, ca. 1901 The late nineteenth century gave birth to the two major postsecondary educational institutions Ithaca has today. Geography and climate[edit]

Leo Tolstoy Count Lev Nikolayevich Tolstoy (/ˈtoʊlstɔɪ, ˈtɒl-/;[1] Russian: Лев Никола́евич Толсто́й, pronounced [lʲɛf nʲɪkɐˈlaɪvʲɪtɕ tɐlˈstoj]; 9 September [O.S. 28 August] 1828 – 20 November [O.S. 7 November] 1910), usually referred to in English as Leo Tolstoy, was a Russian novelist today regarded as one of the greatest of all time. In the 1870s Tolstoy experienced a profound moral crisis, followed by what he regarded as an equally profound spiritual awakening. His literal interpretation of the ethical teachings of Jesus, centering on the Sermon on the Mount, caused him to become a fervent Christian anarchist and pacifist. His new-found asceticism and determination to renounce his considerable wealth tipped his marriage into bitter turmoil, which continued right up to his death at the age of 82 in the waiting room of an, until then, obscure Russian railway station. Life and career Death Tolstoy's grave with flowers at Yasnaya Polyana. Tolstoy died in 1910, at the age of 82. Personal life In films

Morris Bishop Morris Gilbert Bishop (April 15, 1893 – November 20, 1973) was an American scholar, historian, biographer, author, and humorist. "How to Treat Elves," probably his best-known poem, describes a conversation with "The wee-est little elf." When asked what he does, the elf tells the narrator "'I dance 'n fwolic about,' said he, "'n scuttle about and play.'" A few stanzas describe his activities surprising butterflies, "fwigtening" Mr. "It gives me sharp and shooting pains To listen to such drool." Taking up Trevelyan's challenge to write didactic poetry, like Virgil's Georgics, on a modern subject, Bishop produced "Gas and Hot Air." [T]he secret bridal chamber where The earth-born gas first comes to kiss its bride, The heaven-born and yet inviolate air Which is, on this year's models, purified. "Ozymandias Revisited" reproduces the first two stanzas of Shelley's poem verbatim, then closes: And on the pedestal these words appear: "My name is Ozymandias, king of kings Also the names of Emory P.

Franz Kafka Kafka was born into a middle-class, German-speaking Jewish family in Prague, the capital of the Kingdom of Bohemia, then part of the Austro-Hungarian Empire. In his lifetime, most of the population of Prague spoke Czech, and the division between Czech- and German-speaking people was a tangible reality, as both groups were strengthening their national identity. The Jewish community often found itself in between the two sentiments, naturally raising questions about a place to which one belongs. Kafka himself was fluent in both languages, considering German his mother tongue. Kafka trained as a lawyer and after completing his legal education, obtained employment with an insurance company. He began to write short stories in his spare time. Life[edit] Family[edit] Plaque marking the birthplace of Franz Kafka in Prague. The Kafka family had a servant girl living with them in a cramped apartment. Education[edit] Employment[edit] Former home of the Worker's Accident Insurance Institute. Miss FB.

Wellesley College Coordinates: History[edit] Campus of Wellesley College as it appeared circa 1880 Wellesley was founded by Pauline and Henry Fowle Durant, believers in educational opportunity for women. The first president of Wellesley was Ada Howard. The original architecture of the college consisted of one very large building, College Hall, which was approximately 150 meters in length and five stories in height. A group of residence halls, known as the Tower Court complex, are located on top of the hill where the old College Hall once stood. After the destruction of the central College Hall in 1914, the college adopted a master plan developed by landscape architect Frederick Law Olmsted, Jr., Arthur Shurcliff, and Ralph Adams Cram in 1921 and expanded into several new buildings. Campus[edit] Tower Court The college is known for the picturesque beauty of its 500-acre (200 ha) campus, which includes Lake Waban, evergreen and deciduous woodlands, and open meadows. Organization and administration[edit]

Honoré de Balzac Honoré de Balzac (French: [ɔ.nɔ.ʁe d(ə) bal.zak]; 20 May 1799 – 18 August 1850) was a French novelist and playwright. His magnum opus was a sequence of short stories and novels collectively entitled La Comédie humaine, which presents a panorama of French life in the years after the 1815 fall of Napoleon Bonaparte. Due to his keen observation of detail and unfiltered representation of society, Balzac is regarded as one of the founders of realism in European literature. He is renowned for his multifaceted characters, who are morally ambiguous. An enthusiastic reader and independent thinker as a child, Balzac had trouble adapting to the teaching style of his grammar school. Balzac suffered from health problems throughout his life, possibly due to his intense writing schedule. Biography[edit] Family[edit] Balzac's mother, born Anne-Charlotte-Laure Sallambier, came from a family of haberdashers in Paris. Early life[edit] First literary efforts[edit] "Une bonne spéculation"[edit]

Cornell University Cornell University (/kɔrˈnɛl/ kor-NEL) is an American private Ivy League research university located in Ithaca, New York. Founded in 1865 by Ezra Cornell and Andrew Dickson White, the university was intended to teach and make contributions in all fields of knowledge — from the classics to the sciences, and from the theoretical to the applied. These ideals, unconventional for the time, are captured in Cornell's motto, a popular 1865 Ezra Cornell quotation: "I would found an institution where any person can find instruction in any study."[1] The university is broadly organized into seven undergraduate colleges and seven graduate divisions at its main Ithaca campus, with each college and division defining its own admission standards and academic programs in near autonomy. Since its founding, Cornell has been a co-educational, non-sectarian institution where admission is offered irrespective of religion or race. History[edit] Campuses[edit] Beebe Lake waterfall from the Thurston Bridge

George Orwell English author and journalist Eric Arthur Blair (25 June 1903 – 21 January 1950),[1] better known by his pen name George Orwell, was an English novelist, essayist, journalist and critic, whose work is marked by lucid prose, awareness of social injustice, opposition to totalitarianism, and outspoken support of democratic socialism.[2][3] Life Early years Blair family home at Shiplake, Oxfordshire Eric Arthur Blair was born on 25 June 1903 in Motihari, Bihar, British India.[7] His great-grandfather, Charles Blair, was a wealthy country gentleman in Dorset who married Lady Mary Fane, daughter of the Earl of Westmorland, and had income as an absentee landlord of plantations in Jamaica.[8] His grandfather, Thomas Richard Arthur Blair, was a clergyman.[9] Although the gentility passed down the generations, the prosperity did not; Eric Blair described his family as "lower-upper-middle class".[10] In 1904 Ida Blair settled with her children at Henley-on-Thames in Oxfordshire. Policing in Burma Statue