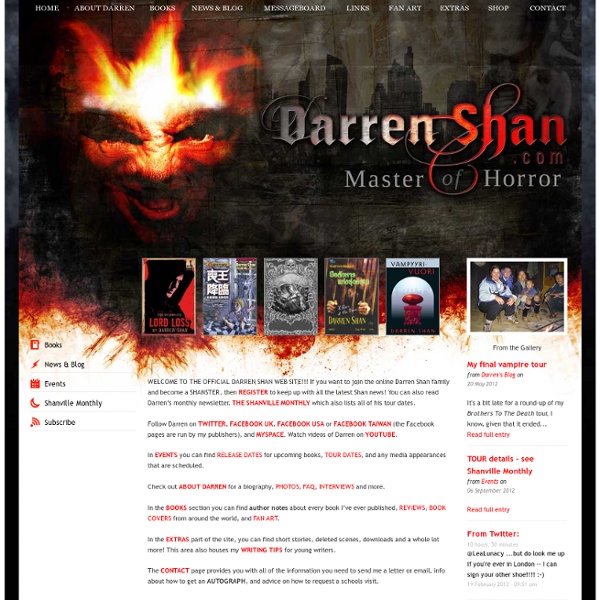 Terry Pratchett Larry Finlay, MD at Transworld Publishers: “I was deeply saddened to learn that Sir Terry Pratchett has died. The world has lost one of its brightest, sharpest minds. In over 70 books, Terry enriched the planet like few before him. As all who read him know, Discworld was his vehicle to satirize this world: he did so brilliantly, with great skill, enormous humour and constant invention. Terry faced his Alzheimer’s disease (an ‘embuggerance’, as he called it) publicly and bravely. My sympathies go out to Terry’s wife Lyn, their daughter Rhianna, to his close friend Rob Wilkins, and to all closest to him.” Terry passed away in his home, with his cat sleeping on his bed surrounded by his family on 12th March 2015. A Just Giving page donating to the Research Institute for the Care of Older People (RICE) has been set up in his memory:

Ian Irvine Zom-b by Darren Shan Rick Riordan David Eddings Biography[edit] Born in Spokane, Washington, in 1931, Eddings grew up near Puget Sound in the City of Snohomish. In the Rivan Codex, he described a good day in Seattle as "when it isn’t raining up;" rain became a consequent feature in many of his novels. After several years as a college lecturer, a failure to receive a pay raise drove Eddings to leave his job, move to Denver and seek work in a grocery store. Eddings's call to the world of fantasy came from a doodled map he drew one morning before work. On February 28, 2007, David Eddings' wife, Leigh Eddings (born Judith Leigh Schall), whom he married in 1962, died following a series of strokes. Eddings resided in Carson City, Nevada, where he died of natural causes on June 2, 2009.[4][5] Dennis, Eddings' brother, confirmed that in his last months, Eddings had been working on a manuscript that was unlike any of his other works, stating "It was very, very different. Bibliography[edit] The Belgariad and The Malloreon[edit] Non-fantasy[edit]

Ottoline And The Yellow Cat by Chris Riddell Shel Silverstein David and Leigh Eddings Ottoline and the Yellow Cat | Kidsreads A bit like Pippi Longstocking, Ottoline Brown is left alone while her parents are off on their own adventures. Actually she is not alone but tended to by Mr. Munroe, a mysterious creature rescued from a Norwegian bog. Her apartment on the 24th floor of the P.W. Ottoline Brown is the charming heroine of Chris Riddell's strange and lovely book, OTTOLINE AND THE YELLOW CAT. The mystery is nicely interrupted here and there, bringing readers details about the collections of Professor Brown (emperors' hats, meteorites and “mysterious objects of various kinds”) and Ottoline (odd shoes and postcards from her parents --- the postcards are on these pages as well), the housecleaning and cooking teams, and a bear living in the building’s basement. But for kids and grown-ups alike, the real wonder of this book may well be its illustrations. Although the book is recommended for readers 8 to 12 years old, children much younger and even older will enjoy it a great deal.