Real Life Version of Up 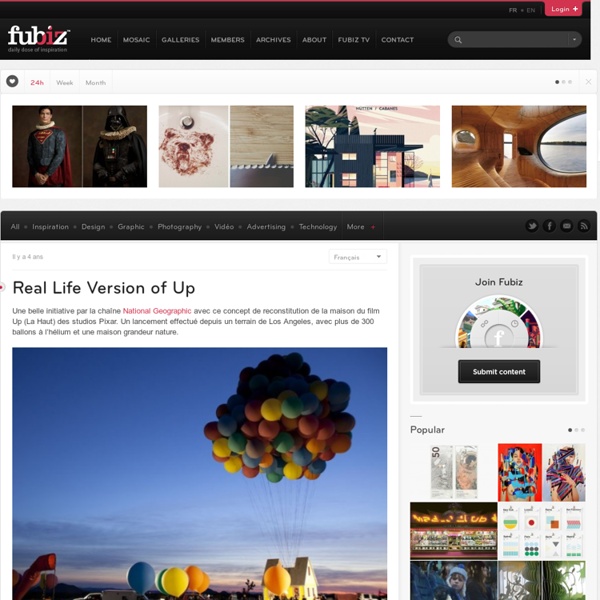 photography by Angus R Shamal - StumbleUpon A selection of some of the most awesome Behind-the-scenes shots I’ve seen from some famous movies. Back when set designs were huge and hand made, when special effects where mechanical and photographic and film stars were risking their lives on the set. source: Ain’t It Cool News. A self portrait of Stanley Kubrick with his daughter, Jack Nicholson and the crew @ the set of The Shining. Downloads « Videoscripts Most Popular Downloads Windows with User Interfaces Handbrake Batch Encoder The all singing all dancing batch Encoder user interface front end for handbrake, most fileformats, metadata and loads of advanced features Check out all of the features here

List of paradoxes This is a list of paradoxes, grouped thematically. The grouping is approximate, as paradoxes may fit into more than one category. Because of varying definitions of the term paradox, some of the following are not considered to be paradoxes by everyone. This list collects only scenarios that have been called a paradox by at least one source and have their own article. Although considered paradoxes, some of these are based on fallacious reasoning, or incomplete/faulty analysis. online paint program Flame Painter Gallery Flame Painter is a unique paint program, it belongs to my 'I am an Artist' experimental project. I think with tools which inspires you, everyone can be an artist. You can try it here, change different brush settings and paint your own flame paintings.

Meet the 16-year-old fashion designer whose sustainable looks may shake up the industry. Using mosquito netting, branches, ribbon, and flowers, 16-year-old Apichet "Madaew" Atilattana is turning the fashion industry on its head. Madaew looks for materials. Photo by Taylor Weidman/Getty Images. The high school student from Khon Kaen, Thailand, creates innovative designs using unconventional materials, and he's garnered quite the following. Madaew is often inspired by plants, animals, and other organic elements. Madaew models a skirt he made from morning glory, a plant he bought at a local market.

The Lion Whisperer Toronto Star Picture Editor Wanda Goodwin shares these delightful images of Kevin Richardson a.k.a "The Lion Whisperer." A new film opening soon in The United States about a rare white lion who escapes becoming a trophy on a wall, is a rare happy ending in a country where more than 1,000 lions are killed legally each year. Kevin Richardson, the man behind the movie, calls himself an "ambassador of lions" and hopes the film will act as one too at a time when foreign tourists are willing to pay up to $40,000 to shoot a big cat. Kevin Richardson, a.k.a. the Lion Whisperer lays with two of his lions on October 11, 2010, in their enclosure at the Kingdom of the White Lion park in Broederstroom, South Africa. (AP Photo/Denis Farrell)

Color Quotes & Crayon Quotes (Sayings about Colors, Coloring, Crayons, etc.) Related Quotes Inner Child Art Imagination Children We could learn a lot from crayons; some are sharp, some are pretty, some are dull, while others bright, some have weird names, but they all have learned to live together in the same box. ~Robert Fulghum Life is about using the whole box of crayons. ~RuPaul rolled paper flowers {tutorial} Welcome to flower week – five days of simple and delightful flower projects. I could probably do three weeks of flowers because there are so many different ways to create them, but I’ve limited it to five of my current favorites. Before we get started, let me make a few disclaimers: 1. I find inspiration for projects all over the place {online, in shops, in magazines}, then figure out how to re-create them on my own. Each of these projects are my adaptation of something I’ve seen elsewhere.

Rethinking the American Lake House: 7 Bold New Designs The American lake house is getting an overhaul. These traditionally quiet, simple cabins and abodes are being rethought across the United States, a typology experiencing national rebirth. Honoring vernacular craft and local building traditions, new projects are also exploring a contemporary architectural language for the rural retreat. These are projects that inherently celebrate the outdoors, whether created for vacationers or permanent residents alike. Usually secluded and private in nature, they promote rest, relaxation, and contemplation. In lake house design, views to the surroundings are paramount.