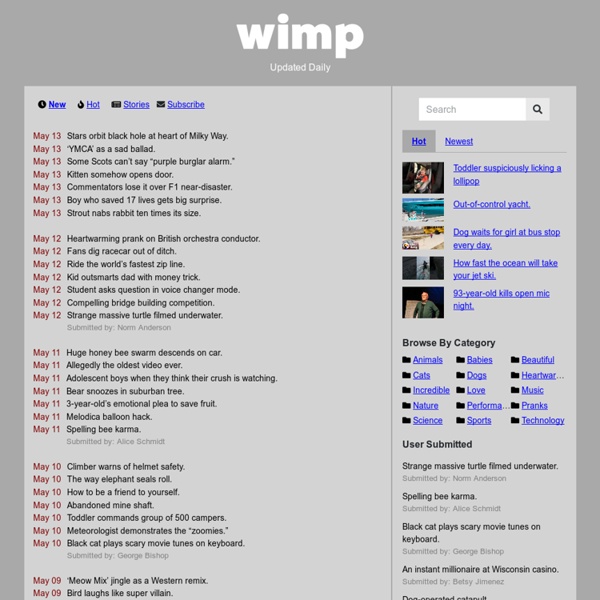 6 Adorable Cat Behaviors With Shockingly Evil Explanations Imitating Snakes to Intimidate You Anyone who has ever witnessed a visceral deathmatch between two angry cats is intimately aware of the blood curdling noises the cute little animals are able to create. Besides the demonically drawn out "Mrrrroww" that emanates from the very bowels of Hell itself, when a cat feels threatened, they always turn to the tried and true hiss. Lots of animals make this noise when in the throes of battle, but why? Why is a sudden rush of moist air from such a small creature so frightening to other creatures that cats use it time and time again? It turns out that when a cat pushes its ears down, bares its fangs, squints its slivered eyes and hisses, it closely resembles another animal that is naturally feared and avoided by most predators: the snake.

Looking past limits: Caroline Casey on TED education A video that will give you hope in the next generation Walt Cochran, a teacher in Kansas City, shared this touching video with us for Education Week about his children — one disabled, one not — who make you think about the depth of the sibling relationship. Lindsay, 10, suffers from a form of Muscular Dystrophy called Spinal Muscular Atrophy and has been in a wheelchair […] Well Timed Photographs Photography Photographs taken at exactly the right moment.

5 Retarded Superstitions (With Logical Explanations) This Irish symbol is possibly the most well-known good luck charm in the world, which is somewhat odd considering the whole "luck of the Irish" thing is a bit of an oxymoron (historians say it originates from the fact that the world just seems luckier when you're inebriated). Where the Hell Did This Come From? The simplest reason the four-leaf clover is considered lucky is because they're so rare, with only around one in 10,000 clovers sporting four leaflets. At least they were rare, as these days there are numerous places to buy your very own four-leaf clover online. Although, if you're the type of person who thinks paying $25 for an clover on the Internet is a good idea, the problems in your life likely have little to do with luck.

2011 May City reaction: Vancouver canucks score goal to go into overtime.May 31 Six story wall of Cicadas.May 31 Did you know: When Australian money is crunched into a ball, it pops back out.May 31 Denmark: Real footage of real cops, real people, real love.May 31 The magic button — Make Everything OK 6 Insane Discoveries That Science Can't Explain We like to feel superior to the people who lived centuries ago, what with their shitty mud huts and curing colds by drilling a hole in their skulls. But we have to give them credit: They left behind some artifacts that have left the smartest of modern scientists scratching their heads. For instance, you have the following enigmas that we believe were created for no other purpose than to fuck with future generations. The Voynich Manuscript

Rage Comics Most Upvoted 243 votes This 78-Year-Old Granny Has the Reaction to Roller Coasters We Can All Relate to The 101 Most Useful Websites on the Internet Here are the most useful websites on the Internet that will make you smarter, increase productivity and help you learn new skills. These incredibly useful websites solve at least one problem really well. And they all have cool URLs that are easy to memorize thus saving you a trip to Google. Pictures of Pennies Hi, I'm Mitch Fincher and these pages are from a talk I gave while a Civil Engineering student at Texas Tech University. The following is the basic pattern for building cantilevered structures with Pennies. Although it looks trivial, we can build amazing structures with these pillars. All penny columns are ten pennies high, a "stack".

40 Unusual Websites you should Bookmark After every 500 additions to MUO directory , we select the 40 most unique and unusual services. It’s been 5 months since the first one, so it’s time for batch no. 2. As mentioned earlier, this round-up is about those little-known undiscovered apps that are rather unusual, useful, free, and are the must-be bookmarked type. Enjoy!