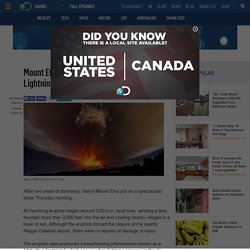 An hourlong eruption began around 3:20 a.m. local time, sending a lava fountain more than 3,000 feet into the air and coating nearby villages in a layer of ash. Although the eruption forced the closure of the nearby Reggio Calabria airport, there were no reports of damage or injury. The eruption also produced a breathtaking phenomenon known as a "dirty thunderstorm," which occurs when lightning appears in the sky directly above an erupting volcano.

Scientists believe the dramatic lighting that accompanies certain eruptions is the result of positively charged particles that are ejected from the volcano. A second type of volcanic lighting has been observed to form downwind of the ash plume, but that "plume lighting" is not well-understood. Related: Webcam Catches Exact Moment of Japan Volcano Eruption. Always a nice day over #Patagonia. #HappyFriday from @space_station! #YearInSpace. An Icelandic River Reaching The Ocean. In crowded Hong Kong, dead find no space to rest in peace - #photos by Kin Cheung @chanman. How winter should look. Oceans on our #EarthRightNow. You are the blue in our big blue marble. #COP21 #YearInSpace. This is what a Nebraska storm looks like. Day 250. #Moon rise as the day phases out. #GoodNight from @space_station! #YearInSpace.

Canadian Rockies. Autumn in Tibetan Himalaya. At the bottom of Canyon Gorge in #Oregon. "Autumn is a second spring when every leaf is a flower." —Albert Camus. Hot water thrown into the air in Antarctica. Traditional windmill in tulip field, Holland. Kliuchevskoi Mountain in Russia. Madinah, Saudi Arabia. Photography by ©David Cartier. Day 249. #Portugal and #Spain all aglow after dark. #GoodNight from @space_station! #YearInSpace. Mt. Fuji from the Sea.

Karymsky Volcano, Russia. The Milky Way from Cannon Beach in #Oregon. Greenland. A speech by HRH The Prince of Wales at The Forests Session of the Lima Paris Action Agenda, Le Bourget, Paris. Your Excellencies, Ladies and Gentlemen, I hope I am in the right room as this is quite the biggest venue I have ever had to negotiate! 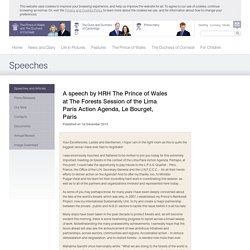 I was enormously touched and flattered to be invited to join you today for this extremely important meeting on forests in the context of the Lima Paris Action Agenda. Perhaps, at this point, I could take the opportunity to pay tribute to the L.P.A.A. Quartet – Peru, France, the Office of the U.N. Secretary General and the U.N.F.C.C.C. – for all their heroic efforts to deliver action on the Agenda? And to offer my thanks, too, to Minister Pulgar-Vidal and his team for their incredibly hard work in coordinating this session, as well as to all of the partners and organizations involved and represented here today… Many steps have been taken in the past decade to protect forests and, as will become evident this morning, there is some heartening progress to report across a broad sweep of work. 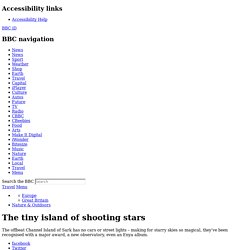 I counted four in 30 minutes. Only a distant cock’s crow, followed by bells tolling from an invisible church, broke the deep silence, reminding me of the coming dawn. I returned to bed with my head full of wonder. The Channel Island of Sark is a British Crown dependency with around 600 inhabitants – but no cars or street lights.

Travel - Madagascar's bizarre natural wonder. 31 beautiful sights on this incredible planet. Temples that tower out of mist-cloaked jungles; a herd of wildebeest, one million-strong, trekking across the African plains; a midnight sky filled with stars. 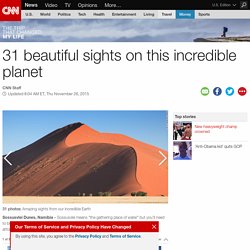 There are some things around the world that provide photo-showing rights for decades. We haven't got them all -- in fact we barely scratched the surface. But we have picked out a few of the scenes that, if you're lucky enough to witness them, will invariably leave you spellbound. Let us know what other beautiful sights you've witnessed on your travels in the comments 1. Sossusvlei means "the gathering place of water" but you'll need to bring your own if you don't want to dehydrate at this, Namibia's most outstanding attraction. The dunes have developed over millions of years, the result of material flowing from the Orange River into the Atlantic, carried north and returned again to land by the surf.

More info at www.namibian.org More: Namibia -- a wildlife photographer's paradise 2. Share your no. 1 travel tip. Donut falls/ Utah/ water frozen in the winter. Ha Link Peak over Grassi Lakes, AB Canada. Westminster Bridge over the River Thames with the Houses of Parliament and Big Ben, London, Region London, England. 10 Most Amazing and Beautiful Tree Houses From Around the World. Trees have very important role in our life. 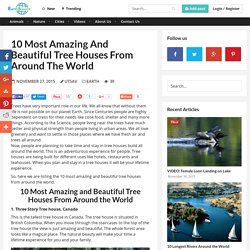 We all know that without them life is not possible on our planet Earth. Since Centuries people are highly dependent on tress for their needs like cook food, shelter and many more things. According to the Science, people living near the trees have much better and physical strength than people living in urban areas. We all love greenery and want to settle in those places where we have fresh air and trees all around. Now, people are planning to take time and stay in tree houses build all around the world. So, here we are listing the 10 most amazing and beautiful tree houses from around the world. 1. This is the tallest tree house in Canada. Image Source: 2. What You Need to Know About the Paris Climate Talks. Many of these commitments may not be ambitious enough, though. 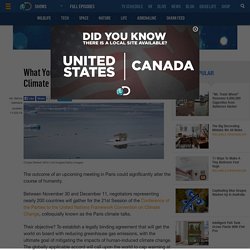 Instead of staying within 2 degrees Celsius, the pledges could still permit warming of up to 3 degrees Celsius, according to a recent United Nations analysis. In Paris, negotiators will attempt to craft a graduated plan that requires each country to revisit and ramp up climate-related commitments every five years. What's not entirely clear yet, however, is exactly how the world will keep emissions in check. According to a preliminary draft of a potential climate agreement released earlier this year by the UN, the deal could include a commitment to cap emissions, to achieve zero net emissions, to reduce emissions by a predetermined amount or to achieve carbon neutrality -- that decision will ultimately be left up to the negotiators.

The man KNOWS of what he speaks .... he has been saying it for 40 years and people called HIM "mad"!