Us doing well for all 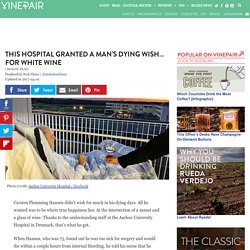 Girl Goes Undercover To Make Sure Friend’s First Date Is Going OK, And Now Everyone Wants To Be Her BFF. Dating can be pretty awkward. 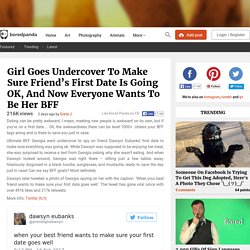 I mean, meeting new people is awkward on its own, but if you’re on a first date… Oh, the awkwardness there can be level 1000+. Unless your BFF tags along and is there to save you just in case. Show Full Text. Anonymous Student Surprises Entire School With 1500+ Handmade Valentines He’s Been Making Since September. Over 1500 students attend Troy High School in Ohio, and one anonymous student made it their mission to make sure not a single one felt lonely on Valentine's day. 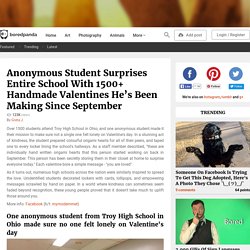 In a stunning act of kindness, the student prepared colourful origami hearts for all of their peers, and taped one to every locker lining the school's hallways. As a staff member described, "these are individually hand written origami hearts that this person started working on back in September. This person has been secretly storing them in their closet at home to surprise everyone today. " Each valentine bore a simple message - "you are loved". Show Full Text As it turns out, numerous high schools across the nation were similarly inspired to spread the love. 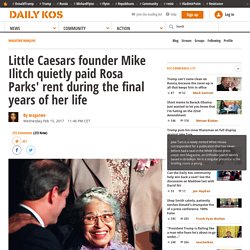 What many folks didn’t know is that the billionaire actually paid Rosa Parks’ rent for over a decade until her passing. After the civil rights icon was robbed and assaulted in her home, Federal Court of Appeals Judge Damon Keith recruited real estate developer Alfred Taubman to help him find Parks new, safer housing. Man Who Saved 669 Children During The Holocaust Has No Idea They’re Around Him, Watch His Reaction. In 1939, on the eve of World War II, a young British stockbroker called Nicholas Winton did something truly incredible. 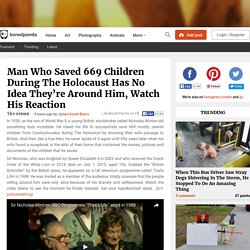 He risked his life to successfully save 669 mostly Jewish children from Czechoslovakia during The Holocaust by ensuring their safe passage to Britain. And then, like a true hero, he never spoke of it again until fifty years later when his wife found a scrapbook in the attic of their home that contained the names, pictures and documents of the children that he saved. Show Full Text Sir Nicholas, who was knighted by Queen Elizabeth II in 2003 and who received the Czech Order of the White Lion in 2014, died on July 1, 2015, aged 106.

Dubbed the “British Schindler” by the British press, he appeared on a UK television programme called That’s Life! "Little Free Pantries" Are the Latest Innovation in Private Charity. By now, we’ve all heard of the little free libraries proliferating across America. 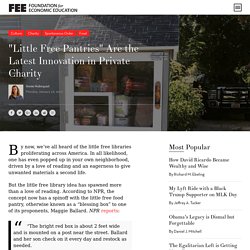 In all likelihood, one has even popped up in your own neighborhood, driven by a love of reading and an eagerness to give unwanted materials a second life. But the little free library idea has spawned more than a love of reading. According to NPR, the concept now has a spinoff with the little free food pantry, otherwise known as a “blessing box” to one of its proponents, Maggie Ballard. NPR reports: “The bright red box is about 2 feet wide and is mounted on a post near the street.

The Cop Who Forgave His Killer. Steven McDonald was shot three times by a teenager in Central Park, leaving him paralyzed from the neck down for 30 years. 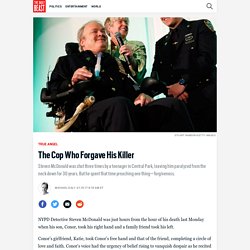 But he spent that time preaching one thing—forgiveness. NYPD Detective Steven McDonald was just hours from the hour of his death last Monday when his son, Conor, took his right hand and a family friend took his left. The Lawyer Protecting Your First Amendment Rights. When a federal civil rights case accusing a Yale professor of sexual misconduct landed on BuzzFeed reporter Katie Baker’s desk, the words that had dominated much of her writing so far resurfaced: “sexual misconduct,” “harassment” and “discrimination.” 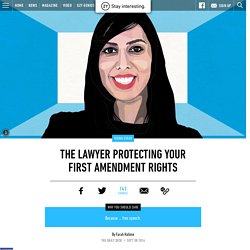 And so did the person she has leaned on when writing about thorny issues. Nabiha Syed, the general assistant counsel and fashion-forward legal eagle for the news organization jumped to attention, helping Baker navigate choppy, litigious waters. Syed’s job is to help journalists “hold powerful people accountable and expose injustice without unintentionally hurting” journalists, the news company and sources in the process, Baker told OZY. An energetic First Amendment geek, Syed tackles defamation issues, government transparency, newsgathering technology and privacy. Log In. He had officially emptied his pockets, meeting his aspiration of “giving while living.” 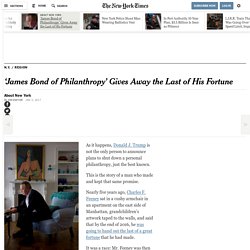 Altogether, he had contributed $8 billion to his philanthropies, which have supported higher education, public health, human rights and scientific research. “You’re always nervous handling so much money, but we seem to have worked it pretty well,” Mr. Feeney, now 85, said last week in a phone interview. His remaining personal net worth is slightly more than $2 million. The man who put up $1.5 million to save 200 Syrian refugees. When Jim Estill decided to sponsor 50 Syrian refugee families, he didn’t tell anyone about it at first—not his accountant, not his friends, not even his wife. 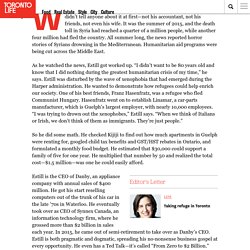 It was the summer of 2015, and the death toll in Syria had reached a quarter of a million people, while another four million had fled the country. All summer long, the news reported horror stories of Syrians drowning in the Mediterranean. Humanitarian aid programs were being cut across the Middle East. As he watched the news, Estill got worked up. George H.W. Bush's 1993 Letter to Bill Clinton Shows Everything That's Wrong with Trump and This Year's Election. We were treated to another of Donald Trump's imitations of a banana-republic dictator last night. Having pledged in the second debate to throw his political opponent in jail if elected, this time he refused to guarantee he would respect the outcome of next month's election. In effect, he left the door open to undermining some of the most basic principles of our democracy, chief among them the peaceful transfer of power between presidents. Advertisement - Continue Reading Below This morning, a stunning counterexample resurfaced.

This letter from outgoing president George H.W. The full text of the letter: Jan 20, 1993 Dear Bill, Amber Heard gives Johnny Depp's $7m divorce settlement to two charities. Image copyright PA Amber Heard is to donate her $7m (£5.3m) divorce settlement from Johnny Depp to two charities that work with abused women and ill children. Heard will give half to the American Civil Liberties Union (ACLU) to prevent violence against women, and half to the Children's Hospital of Los Angeles.

The actress said she hoped to "help those less able to defend themselves". She earlier accused Depp of striking her and throwing a mobile phone during a fight. He denied the allegations. Teacher inspires nervous young test-takers with messages on all of their desks. Chandni Langford teaches fifth grade in the Woodbury City public school system in New Jersey. When she heard that her students were nervous about an upcoming test, she devised a clever and heartfelt way to encourage them.

Langford wrote inspirational messages on each student's desk and left a doughnut hole on each one. The pictures have since gone viral with over 18,000 shares, and hundreds of people have chimed in with messages of support. While many people expressed concern on social media about the desks' surfaces—and the janitors who might have to clean them—the school clarified that the messages were written in dry-erase marker and would easily wipe off. The writing was removed before testing began. Philip Knight of Nike to Give $400 Million to Stanford Scholars.

Japan Railways Build Turtle Tunnels. Japanese railroad companies recently installed a wonderful way to keep turtles safe when they try to cross their train tracks – a turtle tunnel that passes under the tracks. Show Full Text When crossing tracks, turtles can get crushed by trains or get stuck in track switches, causing delays. These tunnels solve problems for humans and turtles alike!

Guy Accidentally Heard Teens Making Fun Of 75-Year-Old Man’s House, So This Is What He Did. When railroad track inspector Josh Cyganik of Union Pacific heard local kids making rude comments about 75-year-old Leonard Bullock’s home, he decided that he had to do something about it. On July 15th, he posted this message to Facebook: “…I was at work a couple weeks ago and I heard 2 teenage boys walked by this old man’s house…[and] they said loud enough for me to hear ‘look at this crappy house they just need to burn it down’!

Turkish Bride & Groom Spend Their Wedding Day Feeding 4,000 Refugees. Cop Spends His Last Day On The Job Handing Out Gift Cards To Strangers. ‘Rat Cop' Joe Crystal Shunned From Baltimore Police Department After Reporting Officer Brutality. BALTIMORE -- Former Detective Joe Crystal sat at a back table in Martin’s West Ballroom last Thursday, scanning the room filled with police officers for any friends he still had left. Taylor Swift Quietly Donated $15,000 To Volunteer Firefighter After Tragedy Struck His Family: Reports. A 5-Year-Old Boy Met A Homeless Man For The First Time. What He Did Next Will Bring Tears To Your Eyes.

Seeing a homeless man inside a Waffle House in Prattville, Alabama, encouraged one little boy to respond -- with kindness. Soon after the man entered the restaurant, Josiah Duncan, 5, began asking his mom questions about what it means to be homeless. Restaurant Owner Noticed Someone Digging In Dumpster, So She Wrote Them A Powerful Note. At P.B. Terminally Ill Costco Employee Breaks Down As Customers Surprise Him With Vacation. Customers in Danville, California, found a way to honor one of their favorite Costco employees. 'Simpsons' Co-Creator Sam Simon Left Entire Fortune To Needy, Moves Charities To Make Emotional Tributes. The Teacher Who Believes Math Equals Love : NPR Ed. What makes a great teacher great? That's the question at the heart of 50 Great Teachers, from the NPR Ed Team. 9 Amazing Acts Of Forgiveness. 9 Awesome Customer Service Stories. The train passenger with no toilet paper who was saved by twitter.

Give Manning and Snowden the Nobel Peace Prize. 10 Most Generous Tips in the World. 'Aaron's Last Wish': Man Gives Servers $500 Tips To Honor His Late Brother (VIDEOS) The FP Top 100 Global Thinkers. A Brave Fan Asks Patrick Stewart A Question He Doesn't Usually Get And Is Given A Beautiful Answer. 12-year-old Food Grower Donates 2 Tonnes of Vegetables to Homeless. Waitress's $1,000 Tip From Stranger Funds Dream Vacation To Italy (PHOTO) Student Freaks Out In Front Of His Class And Says What We're All Thinking About Our Education System. What Do Hidden Cameras Reveal About Humanity? Something Amazing. Roxbury Principal Fires Security Guards, Hires Art Teachers. Anne Frank House On Justin Bieber Outrage: Focus On The Positive. 8 Most Amazing Pay It Forward Chains. This Is The Best Thing You're Going To See All Day.

Report: World Now Down To 5 Stories That Are Inspirational. Is The NYPD’s “Protect and Serve” Policy A Thing Of The Past? Lindsay Lohan wouldn't rehearse with Charlie Sheen. 12 of the Best Parents Ever. 23 Inspiring Things Celebrities Did This Year. 12 Most Awesome Wheelchair Costumes. Must-see morning clip: Terry Jones drowned out by “All You Need Is Love” NYT: NYPD cop's photo helping barefoot man warms hearts - US news - The New York Times. 21 Pictures That Will Restore Your Faith In Humanity. 13 Amazing Random Acts of Kindness To Make You Recover your Faith in Humanity.