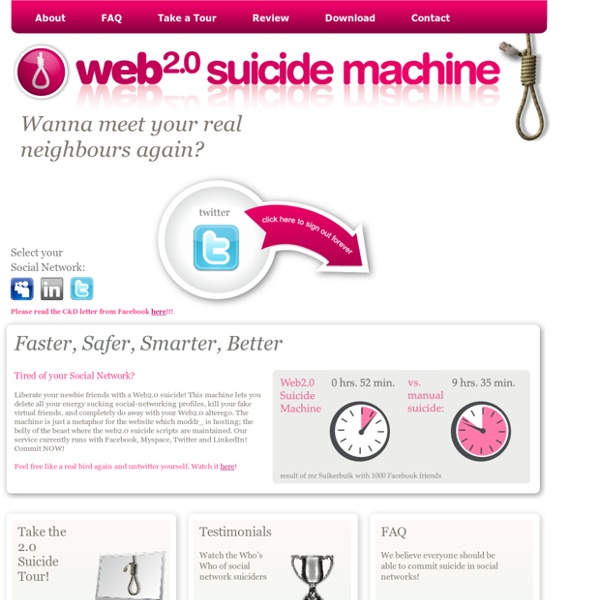 I am absolutely sure that my Facebook login details are correct, but the machine answers always with "Wrong password, dude!"? The facebook screen shows a message like "You are signing in from an unfamiliar location. For your security, please verify your account." Since our service is located in The Netherlands, the facebook server is clever enough to detect that our machine tries to login from a different country than yours. Thus, it asks a security question which consists of your birthday used in your profile. To circumvent this security-problem we have implemented a small work-around.

how to easily delete your online accounts Spring Financial is a finance company based in Canada. The company was founded in 2014. Spring Financial is a subsidiary of Canada Drives, which is a leading auto financing company in Canada. The Chief Executive Officer is Michael Galpin. dexlab.nl - home Social Media: The Privacy and Security Repercussions More and more people are using social media sites to get the latest news and connect with others. The more comfortable we become with these sites, the more apt we are to share personal details about ourselves and let our guard down as we interact with others. Are we sharing too much private information? Is what we share -- both deliberately and inadvertently -- and what we click putting our privacy and security at risk? Our Widespread -- And Growing -- Use of Social Networks

A directory of direct links to delete your account from web services. Can't find what you're looking for? Help make justdelete.me better. easy The Internet In Everyday Life I dated this girl once who was notorious for going through Facebook and “purging” friends, as she called it. Purging would consist of her randomly selecting friends to “unfriend” on the social network; though, I am quite sure this wasn’t really a random selection. Of all her traits, this one I rather enjoyed. Let’s be honest, some times you need to cut ties. People grow apart and move on. How do you know when it’s time to unfriend someone on Facebook? 6 Scientific Reasons Social Networks Are Bad for Society We've always known that computer networks would destroy the world. We just thought they'd get super-intelligent first. Instead, we got social networks, which act as a stupidity X-ray: You suddenly see through the intelligent people your friends pretend to be to the LOLing Farmville players underneath. Some smart people decided to study these networks, and found that they're a bigger threat to society than Skynet. At least the rise of those machines forced us to band together and do things.

Facebook suicide: None of Simone Back's 1,082 online friends helped her By Daily Mail Reporter Updated: 03:14 GMT, 6 January 2011 Simone Black: Some of her so-called online'friends' sent cruel messages after she posted her goodbye message on Facebook A depressed charity worker killed herself as Facebook users mocked a suicide note she left on the social networking website. So-called Facebook ‘friends’ of Simone Back responded with cruel messages after she posted a message that read: ‘Took all my pills be dead soon so bye bye every one.’ One user replied calling her a liar who ‘overdoses all the time’ while another said it was ‘her choice’.

cyberclinic-social-media-is-evil-irsquom-sorry-but-get-a-real-life-2195273 A book entitled Alone Together by MIT professor Sherry Turkle is published over here in a few weeks time, and its strongly worded attack on social media has already caused quite a fuss in the USA. She refers to a "form of modern madness," and in an interview witheringly referred to funerals she has attended during which people dare to check their mobile phones for incoming messages. It must be tricky to land effective punches on an activity that's embraced by hundreds of millions of people and growing fast, but her cause is supported by many who believe that social media is making us more anti-social. They point to cases such as the suicide in Brighton of Simone Back, who stated her intention to take her life on Facebook, but whose "friends" allegedly preferred to bicker amongst themselves rather than raise the alarm.

Social Networking: Community Enabler or Detriment? The debate on the effects of social networking is building steam, with supporters praising its ability to bring people together — and critics warning against obsessive use, the Globe and Mail reports. In 2008, more than one in three adult internet users had at least one profile on a social networking site, up from less than one in ten in 2005. Advocates of Facebook and other social networking sites claim it may be the secret to saving "community," and that, far from being a loner's haven, the internet is the playground of social people that use the web to enhance and supplement real-world relationships. What's more, several studies have been released regarding the effect of online social networking on children. When a child prefers to interact with a computer than with the people around him, it is tempting to think that the web is an isolating activity, but it's actually not, said Mizuko Ito, a cultural anthropologist at the University of California, Irvine.

Barry Diller, IAC Launch Proust, A Social Network For Nostalgic Seniors Social networks are a dime a dozen these days--we have services for text-message sharing, photo sharing, location sharing, and more. But while social media sites typically go after a younger generation of early adopters, a new service out Tuesday is decidedly going after the opposite demographic. Today, Barry Diller's IAC unveiled Proust.com, a memory-sharing service targeting nostalgic seniors heading into their twilight years. The private social network, named for French novelist Marcel Proust, is modeled after the "Proust Questionnaire," and designed to help family members and close friends tell their life stories.