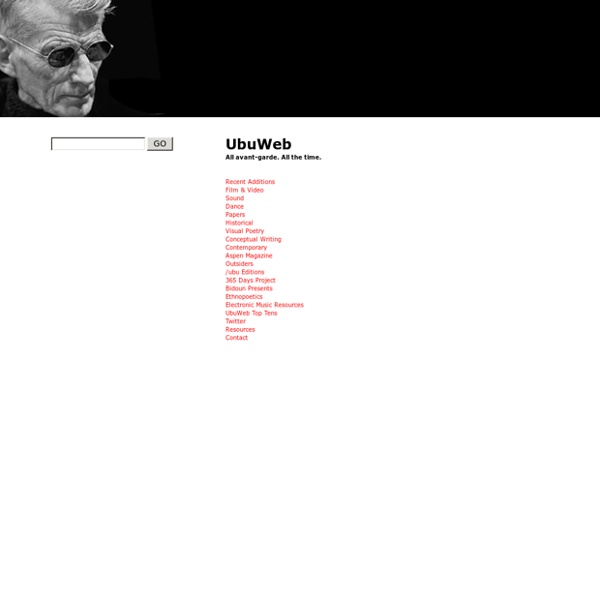 UbuWeb | Spring 2014 Robert Ashley, 1930-2014 UbuWeb mourns the passing of the great American composer Robert Ashley. You can listen to his music and invterviews here, watch his films here, read about him here. If you're unfamiliar with his work, the best place to start is Peter Greenaway's documentary Four American Composers: Robert Ashley (1983). His most well-known video work is Perfect Lives (1978-83), a television opera in seven parts. He interviewed composers such as Terry Riley, Philip Glass, Alvin Lucier, Pauline Oliveros, David Behrman, and Gordon Mumma in his epic video series, Music With Roots in the Aether, where interviews are followed by performances.

The British Library Puts 1,000,000 Images into the Public Domain, Making Them Free to Reuse & Remix Earlier this week, Oxford's Bodleian Library announced that it had digitized a 550 year old copy of the Gutenberg Bible along with a number of other ancient bibles, some of them quite beautiful. Not to be outdone, the British Library came out with its own announcement on Thursday: We have released over a million images onto Flickr Commons for anyone to use, remix and repurpose. These images were taken from the pages of 17th, 18th and 19th century books digitised by Microsoft who then generously gifted the scanned images to us, allowing us to release them back into the Public Domain. The images themselves cover a startling mix of subjects: There are maps, geological diagrams, beautiful illustrations, comical satire, illuminated and decorative letters, colourful illustrations, landscapes, wall-paintings and so much more that even we are not aware of.

A Writer's Community Welcome to a new start. With about two years of blogging under my belt, I have decided to take the small writer’s community with whom I have been blessed, and allow The Daily Post to supplement us with new writers. Each week you will find a new picture prompt to facilitate your writer’s juices. The prompt will have its copyright/ publication privileges easily posted. Please feel free to post the photo prompt and your classic works on your personal blog. Gosheven: 'I have very apocalyptic visions of the world' - Shape Gosheven is the solo project of Bálint Szabó, member of the improvisation trio 12z and curator at Trafó House in Budapest. Leaper is his first solo venture, released in May 2017 on Opal Tapes. He put to use the several years he spent studying different tuning systems for electric guitar.

The Future of Sketchbooks: Every Drawing in This New Moleskine Appears on Your iPhone in Real Time In recent times, there have been faint mutterings that the sketchbook could eventually become extinct, as the rise of smartphones and tablets — particularly the latest iPad, with its long-awaited Apple Pencil — erodes the perceived need for good, old-fashioned pens and paper. However, it seems that reports of the sketchpad’s demise have been greatly exaggerated: Moleskine sees a harmonious future for both paper and digital devices, harnessing the technology of the tablet while preserving the tactile quality of its more traditional counterpart. Moleskine’s new Smart Writing Set comprises three elements — the Paper Tablet notebook, the smart Pen+ and a companion App for your electronic device that enables seamless integration between the sketchbook and your phone or tablet.

Movies : Free Movies : Free Download, Borrow and Streaming by Internet Archive Feature films, shorts , silent films and trailers are available for viewing and downloading. Enjoy! Journeyman Pictures For over twenty years Journeyman has distributed and co-produced, provocative, profound and original factual content, working with the top players in the industry. We're one of the leading independent suppliers of award winning stories to the world broadcast market and pride ourselves on a position at the spearhead of the factual agenda. With a very successful catalogue covering a myriad of subjects and styles; commercial, current affairs, and feature docs, we always keep at heart a central journalistic ethic that goes to the very roots of the company. Image Protection - How to Prevent Image Theft Home -> Articles -> Image Protection written by Greg Cope Protecting Images - Put plain and simple: the only way to protect your images from being downloaded or stolen off a web page is to not put them online in the first place. While I put this fact out there as blunt as possible, there are several techniques we can use to make website downloads and image theft much harder. Of course, image theft can be defined in a number of ways, and its definition - and hence measures (if any) taken to prevent it - will depend upon the individual. There are many ways to protect images from being downloaded, ranging from modifying the image itself (tips 1-3), to preventing webpages downloads (tips 4-8), to being pro-active in finding unauthorized usage of images online (tips 9-10).

18 top stock photo libraries Are you struggling to find images to complete your latest project? If so, these great photo libraries could be the solution to all your problems. iStock offers millions of affordable, unique, royalty free images and stock photos. Images can be downloaded using iStock credits, which are sold in preset packages. The site features a simple search facility as well as a 'browse by category' function, making it easy to find what you're looking for amongst the thousands of images it holds. 02. Refresh the Greenery in your Renders with this Free Library of Plants for SketchUp Are your animated shrubs looking a little tired? Has your digital flora dried up? Are you looking to remedy perennial render problems? Look no further: we've found a solution that will truly make your renders bloom. With the help of a botanist, OneCommunity, an open source software website, has released a list of the most realistic plants optimized for SketchUp.

Resources Tools for being Remarkable What man doesn’t like tools? Well here are the tools you need to re-build yourself as a Remarkable Man. Transcription Guidelines for Captioning – CaptionSync Support Center Closed Captioning your files with CaptionSync allows you to submit your own verbatim transcript. This article shows how to format it correctly. An accurate transcript is the basis from which CaptionSync generates captions. Following these guidelines ensures the transcript will work with our automated captioning process. Learn more about accuracy and quality results for various forms of transcription. In summary, pay attention to speaker IDs and parenthetical comments, scan the table of contents below and save your transcript as a UTF-8 .txt file.