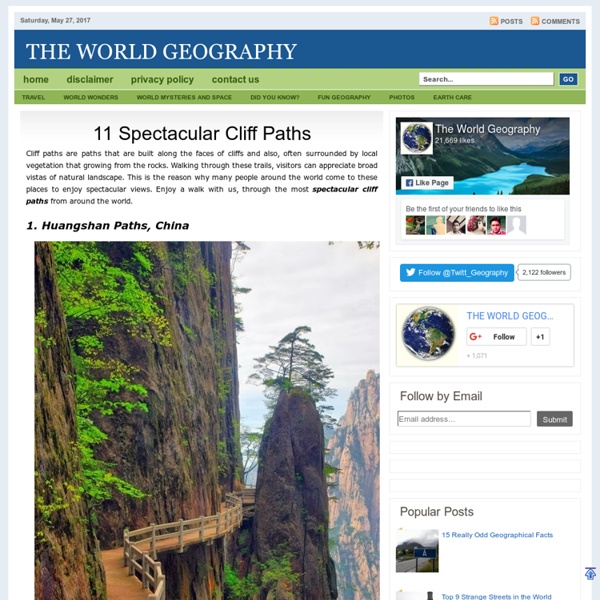 List Of 11 Most Spectacular Natural Bridges And Arches ~ The World Geography Rainbow Bridge National Monument is administered by Glen Canyon National Recreation Area, southern Utah, USA. Rainbow Bridge is often described as the world's highest natural bridge. The span of Rainbow Bridge was reported in 1974 by the Bureau of Reclamation to be 275 feet (84 m), but a laser measurement in 2007 has resulted in a span of 234 feet (71 m). At the top it is 42 feet (13 m) thick and 33 feet (10 m) wide. 3. Sipapu Bridge - USA Sipapu Bridge is a natural bridge or arch located in the Natural Bridges National Monument in the U.S. state of Utah. 4. El Arco de Cabo San Lucas, or Lands End, Cabo San Lucas is a distinctive rock formation at the southern tip of Cabo San Lucas, which is itself the extreme southern end of Mexico's Baja California Peninsula. 5. 6. Xian Ren Qiao (also known as Fairy Bridge), in Guangxi Province, China, with a span of about 295 feet (90 m), and a height of the opening of 210 feet (64 m), appears to be the largest natural bridge in the world. 7. 8. 9.

The Hunt for the Death Valley Germans This is the tale of what for me was a rather remarkable adventure. It was assembled on the basis of my personal recollection and experience, emails, GPS logs and some official documents. It represents solely the perspective and opinions of myself, in my more lucid moments. It is in no way intended to represent the position of the Riverside Mountain Rescue Unit, nor any other agency mentioned. Further, my usual writing style tends to be somewhat lighthearted and flippant, which would be somewhat at odds with the serious and tragic nature of the incident being reported. As part of due diligence I need to add an important note. SmartTravels Uphaa.com 10 Ships with Unusual Large Cargo Heavy lift vessels are quite amazing vessels, built to load, carry and discharge large, unusual shaped cargoes (or even smaller vessels) that will simply not fit inside the holds of conventional vessels. Unusual cargoes can include power plants, submarines, desalination units,oil platform, generators and yachts. Continue reading Top 10 Weirdest Places Around the World Did you know there is a cinema in the middle of the desert? Continue reading Breathtaking Libraries Around the World Everyone has some kind of place that makes them feel transported to a magical realm. Continue reading 9 Cool Gadgets That Everyone Wants to Have at Home From a secret agent-like popup garage to a Lego wall, take a look at these 9 things you definitely want in your home. Continue reading 6 Wicked Beach Sculptures Placed Just To Scare You Continue reading Strangest Graveyards Around the World From a Phone booth graveyardto the Coke machine graveyard. Continue reading

The bizarre strategies of hitch-hiking clams To many of us, bivalves such as freshwater mussels seem like the antithesis of biological cunning; armored lumps of slimy meat that do little more than lie on river bottoms and sift food from the surrounding muck. Many species, however, begin their lives parasitically in the bodies of fish, and employ a wide variety of bizarre, aggressive tactics to lure their hosts. Generally unable to move of their own accord, the parasite larva or glochidium can do little more than clamp down on the first thing that brushes by its cute little jaws, sometimes equipped with vicious fangs and an adhesive tongue. Once attached, the host's skin will grow to encase the tiny hitchhiker, which remains for days or weeks until ready to drop off and settle down as a young mussel. Other species even allow themselves to be swallowed, and settle in the digestive tract where they may absorb nutrients until they are excreted. Now, I know what some of you might be thinking here.

Space Future SPOT SATELLITE MESSENGER :: HOME PAGE Antarctic's Mountains Revealed By Sharpest Map Yet Buried under miles of ice, Antarctica's mysterious mountain ranges are coming into sharper focus thanks to a new map. Created by the British Antarctic Survey, Bedmap2 drew upon millions of new measurements of the frozen continent's surface elevation, ice thickness, and bedrock topography from a wide variety of sources collected over several decades. Due to technological advances, Bedmap2 is also higher in resolution, more precise, and covers more of the continent than the original Bedmap, produced more than ten years ago, according to Charles Webb, deputy program scientist for cryospheric sciences at NASA headquarters. Earth's frozen regions are collectively called the cryosphere. For example, the original Bedmap relied mostly on ground-based measurements, which limited the scientists in terms of how much land they could cover, Webb noted. But a NASA program called Operation IceBridge sends out airplanes that fly over the entire continent.

Planets Planets: The planet count in our solar system has gone as high as 15 before new discoveries prompted a fine tuning of the definition of a planet. The most recent change was in 2006 when scientists reclassified Pluto as a new kind of object - a dwarf planet. Dwarf Planets: This new class of worlds helps us categorize objects that orbit the Sun but aren't quite the same as the rocky planets and gas giants in our solar system. Moons: This count includes only the moons orbiting the eight planets in our solar system. Asteroids: New asteroids are discovered on an almost daily basis. Comets: Orbiting spacecraft such as SOHO have raised this tally in recent years by catching the comets as they plunge toward the Sun - and sometimes vaporize.