Us, not doing our Best 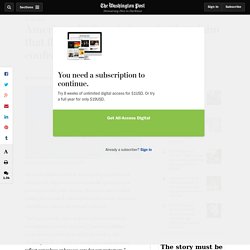 (Alan Diaz/AP) American Airlines said it is investigating an incident in which a male flight attendant reportedly upset a female passenger to the point of tears, then later was recorded getting into a heated confrontation with a male passenger who tried to come to the woman’s defense. “We have seen the video and have already started an investigation to obtain the facts,” American Airlines spokesperson Leslie Scott said in an email to The Washington Post. Uber bans rider for life over threat to accuse driver of rape. Play Video Close Modal Dialog This is a modal window. 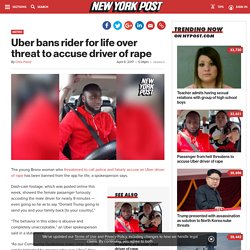 This modal can be closed by pressing the Escape key or activating the close button. Caption Settings Dialog Beginning of dialog window. The young Bronx woman who threatened to call police and falsely accuse an Uber driver of rape has been banned from the app for life, a spokesperson says. ‘I voted for Trump! You lost!’: White Starbucks customer accuses barista of ‘discrimination’ A man who claimed to be a Trump voter was filmed accusing a female Starbucks employee in Miami of "discrimination" on Nov. 16. 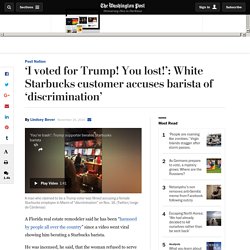 Appearing on Bloomberg TV, the CEO of a pharmaceutical company that recently hiked the price of a drug used for critically ill infants and AIDS patients by 5,500 percent , defended the price increase by promising better things to come for future patients. 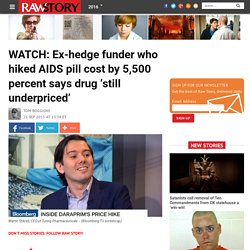 Martin Shkreli, 32, the founder and chief executive of Turing Pharmaceuticals, recently purchased the rights to Daraprim and immediately increased the cost from $13.50 to $750 per pill. Asked why the huge increase in cost, Shkreli explained that the old companies who owned the drug were “practically giving it away almost,” and he needs to turn a profit. Noting that the pill sold for $13.50 and the course of treatment “to save your life was only a $1,000,” Shrkeli said he had to make a change.

“We know, these days, in modern pharmaceuticals, cancer drugs can cost $100,000 or more, whereas these drugs can cost a half of a million dollars,” he explained. “Daraprim is still under-priced relative to its peers.” ESPN Mean Girl Apologizes Badly. Raise your hand if you have ever been personally victimized by Regina George. 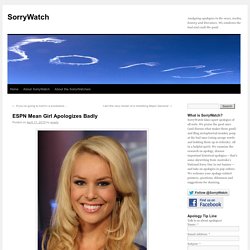 Apologizing to the public is well and good, but you also have to apologize directly to the person you wronged. And in this case, even the public apology was lousy. This morning a video was released in which ESPN reporter Britt McHenry delivered a nasty tirade to a towing company employee. “I’m on television and you’re in a f**kin’ trailer, honey”: Britt McHenry’s tantrum video puts angry, entitled celebs on notice. WATCH: Plainclothes NYPD cop’s enraged, wild-eyed rant against Uber driver caught on video. In the video embedded below, a plainclothes New York City Police officer can be seen angrily berating a driver for the ride-share service Uber, hurling xenophobic invective and threatening to arrest the driver over a petty parking dispute. 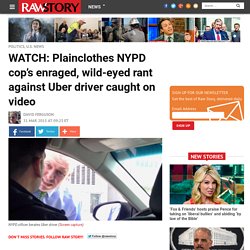 The New York Daily News reported that the video was recorded and uploaded to YouTube by passenger Sanjay Seth, who titled it “Police Abuse of Uber Driver in New York City, March 30, 2015.” According to Seth’s description of the clip, “In an unmarked car, the policeman was allegedly attempting to park without using his blinker at a green light. (His reverse lights weren’t on. Likely double parked without hazards on.) WATCH: Bible-toting ‘f*cking Christian’ throws screaming tantrum at In-N-Out Burger. Don't miss stories. 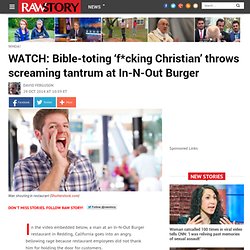 Follow Raw Story! In the video embedded below, a man at an In-N-Out Burger restaurant in Redding, California goes into an angry, bellowing rage because restaurant employees did not thank him for holding the door for customers. In video dated Monday, the man can be seen shouting at the restaurant’s staff. He had apparently been hanging around the restaurant most of the day, holding the door open for customers and carrying a Bible. When a manager asked the man to leave, he exploded in an expletive-laced rant before vandalizing the store’s plastic plant display. Motorcyclists Assault SUV Driver In NYC After Fender Bender, High-Speed Chase.

An annual New York City motorcycle ride and rally, called the "Hollywood Block Party," turned violent Sunday after a motorcyclist was involved in a minor fender bender with a black Range Rover. 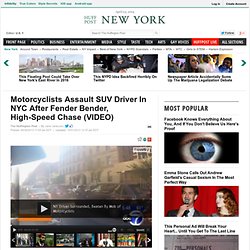 Both the initial accident, and the high-speed chase that followed, were caught on tape via the mounted helmet camera of another biker. Motorcyclists, after catching up with the car, assaulted the driver. The driver--identified as an Asian male in his thirties who was driving his wife and his young child--hit a motorcyclist's back wheel after being cut off on the West Side Highway in Upper Manhattan. The New York Daily News reports that no one was injured in the collision, and the driver initially stopped. Brad.jpg (493×569) 1907, exposition coloniale de Vincennes. UNCOVERED: The Haunting 'Human Zoo' of Paris. In the furthest corner of the Vincennes woods of Paris, lies the remains of what was once a public exhibition to promote French colonialism over 100 years ago and what we can only refer to today as the equivalent of a human zoo. 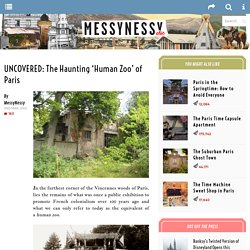 In 1907, six different villages were built in the Jardin d’Agronomie Tropicale, representing all the corners of the French colonial empire at the time– Madagascar, Indochine, Sudan, Congo, Tunisia and Morocco. The villages and their pavillions were built to recreate the life and culture as it was in their original habitats. This included mimicking the architecture, importing the agriculture and appallingly, inhabiting the replica houses with people, brought to Paris from the faraway territories. The human inhabitants of the ‘exhibition’ were observed by over one million curious visitors from May until October 1907 when it ended. In 1906, this Congolese replica “factory” was built in Marseille as part of a colonial exposition. UPDATE: 'Fired' Is Now The F-Word For Rutgers Basketball Coach : The Two-Way. (We most recently updated the top of this post at 11:10 a.m. 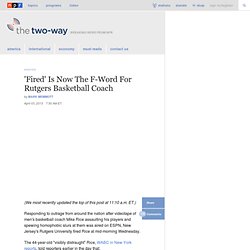 ET.) Responding to outrage from around the nation after videotape of men's basketball coach Mike Rice assaulting his players and spewing homophobic slurs at them was aired on ESPN, New Jersey's Rutgers University fired Rice at mid-morning Wednesday. The 44-year-old "visibly distraught" Rice, WABC in New York reports, told reporters earlier in the day that: "I've let so many people down, my players, my administration, Rutgers University, the fans, my family — who's sitting in their house, just huddled around because of the fact that their father was an embarrassment to them. Why? Why Would You Do Such a Thing? Most Upvoted 1647 votes The Samsung Galaxy S5 Gets a Hammer Test, but This Time the Phone Fights Back.

Steubenville: this is rape culture's Abu Ghraib moment. Trigger warning: graphic descriptions of rape, and pixellated images from the night in question. It lasted for hours. The pictures circulated online show the unconscious teenage girl hung like a shot steer between two laughing young men, Trent Mays and Ma'lik Richmond, who were convicted this week of driving her from party to party, raping her, assaulting her, and filming themselves doing so.

8 Most Amazing Pay It Forward Chains. Pay it Forward in Canada Continues for 228 Coffee Orders For some coffee drinkers in Canada, it's all about paying it forward – for three hours. At a Tim Hortons branch, the chain of kindness was 228 customers strong, as one customer after another paid for the next person's purchase.Just a few days before Christmas 2012, one drive-through customer in Winnipeg, Manitoba, Canada decided to pay for the next customer in line at Tim Hortons, a Canadian coffee chain. Glare of Lance Armstrong probe falls on SF financier. Credit: Brad Camembert/Shutterstock Lance Armstrong’s “no-holds-barred” interview with Oprah Winfrey on Thursday, when he’s expected to confess to the use of performance-enhancing drugs during his professional cycling career, comes as a federal probe into his finances has widened to focus on the man who bankrolled his champion teams: legendary San Francisco financier Thomas Weisel.

A Vancouver-area teen who used YouTube to share her heart-wrenching story of being bullied online and beaten at school has killed herself, unleashing a torrent of social media condolences and soul-searching. Amanda Todd was found dead in Coquitlam on Wednesday night, less than a month before her 16th birthday. News of her torment and death are being shared on social media through Tumblr, Facebook and Twitter, where #RIPAmanda is trending. 8 Most Shocking Bullying Stories.