Spring afternoons in the Shire - Shaun Jeffers. Taiwan shrouded in mist. Good morning friends! Extinct volcanoes dot New Mexico's landscape. THIS is what sunrise at the top of the world looks like. Live now snap by CO BB. Northern CA Bay Area. I spent the summer of 1996 doing research at NASA Ames Research Center. Great memories! Sun can be blinding up here some mornings. #GoodMorning from @space_station! #YearInSpace. The most beautiful drives Scotland has to offer. MOUNTAINS, sea and islands will unfold before you on some of Scotland’s most scenic roads Bealach na Bà (Pass of the Cattle), Ross and Cromarty You won’t forget a drive on the Belach na Ba, the road to glorious Applecross. 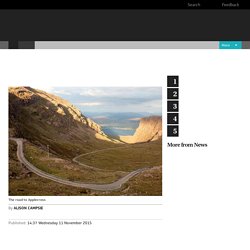 It’s only fair that, whoever drives there, gets to be the passenger on the way back because once you’re behind the wheel you’ll miss most of the tremendous views of Wester Ross, Skye and the Outer Hebrides, such is the focus required. It’s all eyes on the hairpin bends and narrow single track sections. Once I drove over here and my friend from London started crying in the back because she was so afraid of plunging off the side. Things to remember: Keep your eyes on the road, and your hands on the wheel. A83 Rest and Be Thankful, Argyll Once you hit the west side of Loch Lomond and the road starts to rise and undulate with Ben Vorlich coming closer into view, you know you are off to somewhere special with the city firmly in the rear view mirror. Come for the #polarbears, stay for the Northern Lights. Good News Friday {Climate Talks Still On, Nordic Countries Greening} On the heels of the terrible news of the Paris bombings, France plans to go ahead with a global climate change summit in Paris at the end of the month. 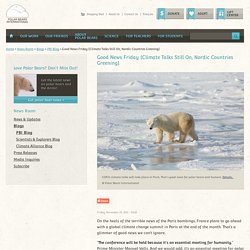 That’s a glimmer of good news we can’t ignore. “The conference will be held because it's an essential meeting for humanity," Prime Minister Manuel Valls. And we would add, it’s an essential meeting for polar bears. About 118 world leaders are expected to attend the opening day of the Nov. 30-Dec. 11 conference, which is due to nail down a global deal to limit rising greenhouse gas emissions. In the lead up to the Paris climate conference, Scandinavian leaders are taking action against climate change. At the Nordic Council of Minister’s session in Reykjavik, the Nordic climate and environmental ministers adopted a declaration that seeks to strengthen their call for an ambitious climate agreement in Paris. Read more: Reuters, France to go ahead with climate summit, with tough security. Torrential rain and flooding has ravaged parts of southern Iraq. A heartbreaking arc in the #StoryOfWater. The #bisoncam is full of otherworldly riches, like this glowing moon taken by ValleyFlowers.

The Jaw dropping Aldeyjarfoss Waterfall, Iceland. Purple Haze all in my eyes, don't know if it's day or night on the #SkyCam. Sandy Glacier Caves, Mount Hood, Oregon, CA - Photograph via Josh Hydeman. Saw some big rip currents in #mozambique today. These can be very dangerous. Be careful. #YearInSpace. #Bermuda out of the blue #YearInSpace.

Braids of silt plume into a sea of blue. The #StoryOfWater. Taking a water taxi in Venice □□ The sea is on fire - Jonavan Crail. This dazzling 'liquid rainbow' flows through a national park in Colombia >> Laurie Nelson took this stellar snap of beautiful colors splashed above the #orcacam. Day 236. A sheet of #clouds blanket our beautiful #Earth. #GoodNight from @space_station! #YearInSpace. Beautiful sunset. A meandered river. The #StoryOfWater. A meandering river. The #StoryOfWater. Culture - Eight of the world’s most breathtaking theatres. It looks like someone raked these clouds! Houston, we have a picture...and you look great! Nothing like a little #aurora to get things started. Good morning from @space_station! #YearInSpace. The Arctic.

COP 21 Paris France Sustainable Innovation Forum 2015 working with UNEP. Taking on climate change from all angles. Perhaps the best way to push the agenda is online. 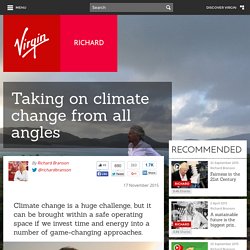 Social media has great potential to amplify messages to a global scale – once these messages are supported by the public, they cannot be ignored. I was proud to be a part of the #GlobalGoals campaign, which put 17 key sustainability milestones in the spotlight by saturating social media channels with messaging, imagery and sentiment. Now, another key campaign has launched to grow a cultural movement directly geared at tackling climate change. #LoveEarth is a campaign for Earth set to inspire Facebook’s global audience of 1.5 billion. People who "like" Earth's page receive photos, videos and graphics from artists, leaders, celebrities, museums, scientific organisations, and NGOs.

Honolulu and Diamond Head Crater. I can hear the waves and feel the sun from here. Gölcük Bolu, Turkey. Monte Fitz Roy, Patagonia - Ted Gore. Aloha Hawaii @HI_Volcanoes_NP! Our National Parks are a National Treasure! #FindYourPark. Unmistakably #Africa. #YearInSpace. Day 234. #Dubai shines at night. #GoodNight from @space_station! #YearInSpace. Even in darkness the #GreatLakes are unmistakable. #GoodMorning from @Space_Station #YearInSpace. The fall foliage of Northern Oregon. Day 233. Once upon a #star over Southern India. #GoodNight from @space_station! #YearInSpace. A flash of lightning at night gives this cloud an ominous glow. The delicate fingerprints of water imprinted on the sand. The #StoryOfWater. 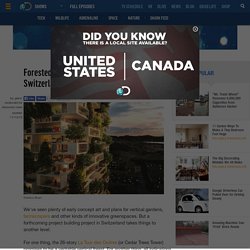 But a forthcoming project building project in Switzerland takes things to another level. For one thing, the 26-story La Tour des Cedres (or Cedar Trees Tower) promises to be a veritable vertical forest. For another thing, all indications are that this one is actually going to get built. The mixed-use residential and retail building, which will rise to a height of more than 117 meters (383 feet), has been approved by officials in Lausanne, Switzerland. Construction is set to begin in 2017. These magnificent dunes remind me of an Escher drawing. Ring of fire, Fitz Roy, Argentina. Today is a new day with limitless possibilities to do great things. #GoodMorning from @Space_Station #YearInSpace. Friday the 13th hasn't been easy on the world □ #PrayForParis #PrayForJapan #PrayForMexico #PrayForLebanon.

Climate Change Hearing 11/13/15. What a Week! Polar Bear Week out on the tundra in Buggy One has been huge: we’ve seen a lot of bears, a red fox, an Arctic fox, a gyrfalcon (and, more surprisingly, a goose!). 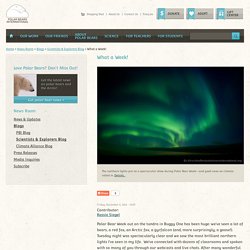 Tuesday night was spectacularly clear and we saw the most brilliant northern lights I’ve seen in my life. We’ve connected with dozens of classrooms and spoken with so many of you through our webcasts and live chats. After many wonderful years participating in this unique program, it’s been a highlight, not least of all for the chance to spend time with old friends and new in one of the most magical landscapes on the planet. And this week is even more memorable for the unprecedented victories we’ve seen on climate. We all know we have to shift to renewable energy and slash our greenhouse emissions to solve the climate crisis and save polar bears, and this week alone we’ve seen incredible progress on that front. Geierlay suspension bridge, Mörsdorf. Colors patiently swirl in a reservoir in Iraq. The #StoryOfWater. Earth - See an entire valley change colour in this lovely timelapse. The night sky over the Maldives #EarthCapture by @thal_ath.

Big Dipper & Big Lights now on #northernlightscam Snap from auroraphile: Valley Flowers. Nothing can compete with renewable energy, says top climate scientist. Catastrophic global warming can be avoided with a deal at a crunch UN climate change summit in Paris this December because “ultimately nothing can compete with renewables”, according to one of the world’s most influential climate scientists. 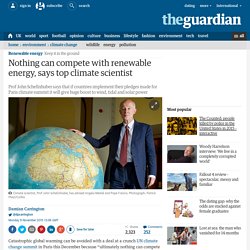 Most countries have already made voluntary pledges to roll out clean energy and cut carbon emissions, and Prof John Schellnhuber said the best hope of making nations keep their promises was moral pressure. Schellnhuber is a key member of the German delegation attending the Paris summit and has advised Angela Merkel and Pope Francis on climate change. He said there was reason for optimism about the Paris talks, where at least 80 heads of state are expected.

“That is a very telling thing - a sign of hope - because people at the top level do not want to be tainted by failure,” he said. Day 230. You have to climb to reach the #stars. But the view is great. #GoodNight from @space_station! #YearInSpace. Dazzling Liquid Rainbow Flows Through Colombia. Cano Cristales, however, is 100% natural. 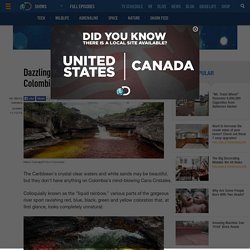 A booming population of the riverweed Podostemaceae thrives on the 60-mile river's floor, its vibrant red hue plainly visible through the babbling brook. Elsewhere, a brilliant combination of rocks, algae and sand is responsible for the remaining colors. The landmark reveals its true majesty for only a few weeks in the autumn. During the rainy season, the river runs too deep and and too quickly for visitors to see through its water. During the dry season, water is not abundant enough to support the plethora of plant life responsible for the colorful show. Related: Have You Seen These Bubblegum-Colored Lakes? According to Atlas Obscura, the river is not easy accessible; visitors must fly into a nearby town and make the journey through Serrania de la Macarena National Park on horseback.