Letter K: Sirmilik National Park #NASA. Photography by ©David Kaplan. Pictures of the day: 24 December 2015. He who has not Christmas in his heart will never find it under a tree. Roy L. Smith. Have an awesome day dear friends. Remember to flow...like a river. See you later! □□ This is what Shanghai looks like from above. Doubtful Sounds, New Zealand. Lovely evening to you □❄□ Mysterious Stonehenge, England. Day 271. A colorful night over #Earth. #GoodNight from @space_station #YearInSpace. Photography by ©Justin Brown. Photography by ©Maplewhat. Poland is amazing □□□ 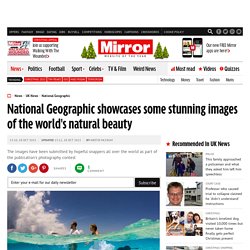 Awe-inspiring aerial photos snapped by drones give bird's-eye view of sublime and enchanting scenes. The view from the top is known to be better than average - and these incredible drone photographs prove just that. 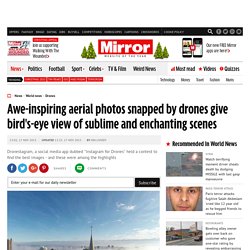 Earlier this month, Dronestagram - a social media app dubbed "Instagram for Drones" - held a contes t to find the most awe-inspiring images taken by flying machines. And these astonishing snaps were among the highlights. Ricardo Matiello's astonishing image which shows buildings poking through clouds in Maringá, southwest Brazil, claimed first prize in the "Places" category. He captured the brilliant snap by flying his drone on a foggy day.

Dronestagram/Tahitiflyshoot Dronestagram/kdilliard In the "Nature" category, first prize went to a picture titled "Snorkeling with Sharks", which shows exactly that, just off the coast of an island near Tahiti. Read more : Amazing drone photography captures Iceland from the sky Runner-up in the same category was an overhead shot of La Jolla Rough Water Swim, a race which takes place in the coastal resort of San Diego, California. Watch Next. These stunning moments are National Geographic's top nature photographs of 2015. National Geographic has picked its top nature photographs across the past year. 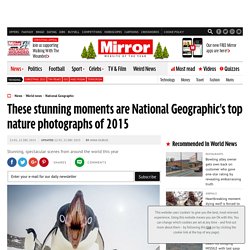 These stunning seven images were taken from the magazine's 'Photo of the Day' feature, presenting work by staff and readers. In one, a penguin opens its beak as wide as possible offering an unusual glimpse inside its mouth. Clinton Berry captured the photo on Antarctica after studying the movements of the penguins for weeks. "They walked in the same area almost every day.

We would get maybe a dozen or less going by. "The day this was taken there were over 60 penguins. Read more Awe-inspiring aerial photos snapped by drones give bird's-eye view of sublime and enchanting scenes. @AlinaDal_F Good evening and sweet night dear Alina□♥️ The Grand Theatre at Ephesus, Turkey. Photography By ©Paul Bica. 04:35 on December 17th, over Australia. 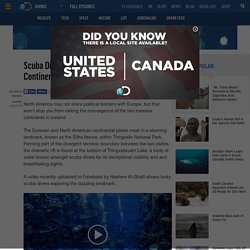 The Eurasian and North American continental plates meet in a stunning landmark, known as the Silfra fissure, within Thingvellir National Park. Forming part of the divergent tectonic boundary between the two plates, the dramatic rift is found at the bottom of Thingvallavatn Lake, a body of water known amongst scuba divers for its exceptional visibility and and breathtaking sights.

A video recently uploaded to Facebook by Hashem Al-Ghaili shows lucky scuba divers exploring the dazzling landmark: Glenridding in Cumbria has flooded for the 3rd time in a month as 23 flood warnings remain in place across the UK. Algonguin Park, Ontario. Photography by ©Martin Drahomirecky. 10 Ways To Reduce Your Carbon Footprint in Environment.

A carbon footprint can be defined as the total sets of greenhouse gas emissions due to an organization, event, product or individual. 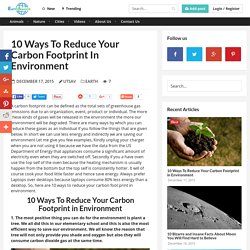 The more these kinds of gases will be released in the environment the more our environment will be degraded. There are many ways by which you can reduce these gases as an individual if you follow the things that are given below. In short we can use less energy and indirectly we are saving our environment Let me give you few examples, Kindly unplug your charger when you are not using it because we have the data from the US Department of Energy that appliances consume a significant amount of electricity even when they are switched off. Secondly if you a have oven use the top self of the oven because the heating mechanism is usually happen from the bottom but the top self is consistently hotter.

10 Amazing Facts About Planet Earth Probably You Don't Know. Earth is the only Planet in the solar system known to harbour life. 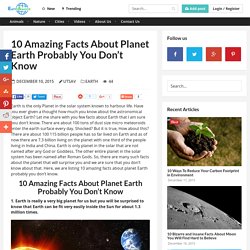 Have you ever given a thought how much you know about the astronomical object Earth? Let me share with you few facts about Earth that I am sure you don’t know. There are about 100 tons of dust size micro meteoroids enter the earth surface every day. Shocked? But it is true, How about this? 1. Image Source: moviewriternyu.wordpress.com. World-Renowned Physicist Proposes ‘Peace-Promoting Technology’ to Counter Terrorism. The Black Forest in Germany.