River Tees near Wheysike House, Upper Teesdale, County Durham Pic: David Forster #StormHour. Nature's fury: Monster waves battering Cornwall - Aaron Parsons photography #StormHour. Ebor Falls, Australia #pictures #beauty. The Most Astonishing Photos That Won Awards In 2015. Baby whales & the Northern Lights: National Geographic's top 20 photos of 2015. Prepare to go on a journey around the world, stopping at some of the most quirky and beautiful places on Earth, all from the comfort of your chair. 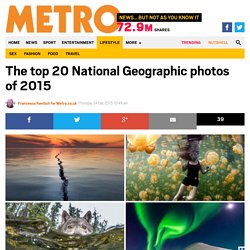 For National Geographic have unveiled their top 20 photos of 2015 and they are absolutely breathtaking. To create the roundup that’s been giving us some serious wonderlust, they took a look at the shots that were most shared, commented on and liked throughout the year. And let’s just say they make the holiday snaps we thought worthy of Instagram look boring AF. 1. Clinton Berry – When Penguins Attack ‘I studied the movements of the penguins for weeks.

‘The day this was taken there were over 60 penguins. MORE: Beautiful photos of rescue dogs show the difference a happy home can make 2. ‘This little lake is a part of my life. 3. ‘Ice on Lake Baikal is a very interesting phenomenon, ice ridges, cracks, tears, hugging. 4. This was taken at the site of Hilma Hooker, a cargo ship purposely sunk off the Caribbean island of Bonaire. 5. 6. 7. 8. 9. 10. This Is What Happen When Mother Nature Spread Its Colors. Tim Peake: British astronaut posts incredible time-lapse video of lightning storm over Earth. EmbedFeed British astronaut Tim Peake has posted online an incredible time-lapse video he took on board the International Space Station (ISS) of a lighting storm over Earth. 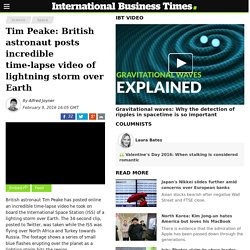 The 34-second clip, posted to Twitter, was taken while the ISS was flying over North Africa and Turkey towards Russia. The footage shows a series of small blue flashes erupting over the planet as a lighting storm hits the region. Underneath the video, the 43-year-old former army major stated, "Amazing how much lightning can strike our planet in a short time". This footage is the latest in a number of videos that Peake has posted while on board the ISS, previously showing how he conducts day-to-day tasks in space such as playing ping pong, having a shower, making a coffee and going to the toilet.

He conducted a space walk on 15 January to replace a failed voltage regulator that compromised one of the station's eight power channels, but it was cut when fellow astronaut Tim Kopra reported a leak in his spacesuit helmet. #StormHour (@StormHour) Red-aurora-borealis. A big one. #StormHour (@StormHour) Vladimir Chuprikov: Russian Winter Photos. Vladimir Chuprikov is a Russian photographer. 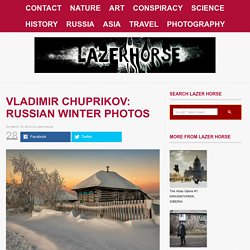 He took these pictures near the town of Perm in Russia. Just so you know, Perm is in the Urals. The pictures look made up and too good to be true but I promise you they’re bona fide… I mean he might have mucked about with the colours or whatever but that’s par for the course ain’t it. Winter in Russia - Photo by Vladimir Chuprikov. Unexpected sunrise.. by ElenaPardini1 #photo. Mangart Lake Sunset by buckles #photo. Canada Strikes Landmark Deal to Protect Over 9 Million Acres of Rainforest. Canada Strikes Landmark Deal to Protect Over 9 Million Acres of Rainforest. Baikal is the deepest lake of our planet. His depth of around 1640 meters! Eastern Siberia!□☺️□ Multnomah Falls is located in the east of Oregon Trutdeyl, USA, in the canyon of the Columbia Rive!□☺️□ The territory of the national park "Taganay" covers the northern part of the mountain ranges of the Southern Ural□□

Cosmic "geyser" lake. Republic Altay.Zima! Cold! Warm Lake! Fantastic□☺️□ Northern Lights pinkish hue in the sky over the wound in Nordlender! Norway□☺️□□ Chateau Mont Saint-Michel - one of the attractions of France on a rock sticking out of the water depths□☺️□ Melissani cave on the island of Kefalonia! Shallow azure waters of the lake rests on a stone base□☺️□ Hubbard Glacier by DirkSeifert #photo. Twitter. Twitter. Sweet Wake Up..