BOOK RIOT12 Badass Embroidered Bookish Quotes. Book Riot is one of my favorite places on earth because it lets me shamelessly combine my three best-loved things: books, crafts, and badassery. 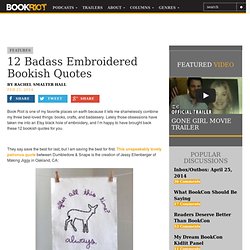 Lately those obsessions have taken me into an Etsy black hole of embroidery, and I’m happy to have brought back these 12 bookish quotes for you. They say save the best for last, but I am saving the best for first. TreeHugger. Looking in retrospect and thanks to urban activists like Jane Jacobs, we now know that elevated highways can be a real eyesore, often effectively destroying established neighbourhoods and bringing in traffic congestion. 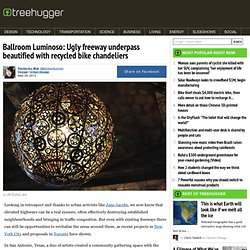 But even with existing freeways there can still be opportunities to revitalize the areas around them, as recent projects in New York City and proposals in Toronto have shown. In San Antonio, Texas, a duo of artists created a community gathering space with the installation of elegant chandeliers built out of recycled bicycle parts, transforming a dingy, dark freeway underpass into a rather charming space. © JB Public Art Calling it Ballroom Luminoso, artists Joe O’Connell and Blessing Hancock repurposed various bike components, combined it with some custom steel work and LEDs to create six luminous spheres that glow and change colour.

The artists explain via This is Colossal, linking the installation with the area's history and emerging bike culture: © JB Public Art. Once upon a time… « Present&Correct. … in Germany, there was a series of stamps based on classic Fairy Tales. 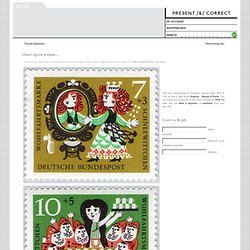 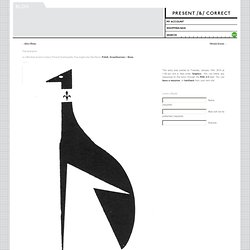 Dream house. » Top marques. A collection of mid century French trademarks. You might also like these: Polish, Scandinavian & these. This entry was posted on Tuesday, January 14th, 2014 at 1:48 pm and is filed under Graphics.. Leave a Reply eight × 5 = © 2014 Present&Correct. The Bed Book: Sylvia Plath’s Vintage Poems for Kids, Illustrated by Quentin Blake. By Maria Popova. 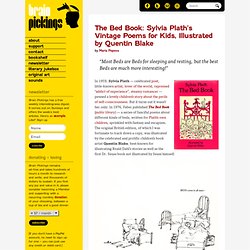 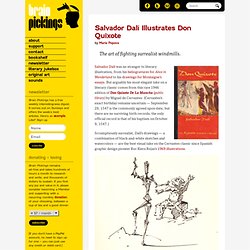 Salvador Dalí was no stranger to literary illustration, from his heliogravures for Alice in Wonderland to his drawings for Montaigne’s essays. But arguably his most elegant take on a literary classic comes from this rare 1946 edition of Don Quixote De La Mancha (public library) by Miguel de Cervantes. (Cervantes’s exact birthday remains uncertain — September 29, 1547 is the commonly agreed upon date, but there are no surviving birth records; the only official record is that of his baptism on October 9, 1547.) Fredun Shapur: Hero. Everyday Objects Made Better With Sketches. 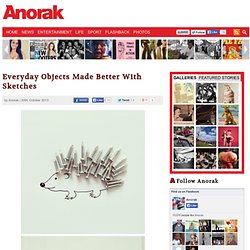 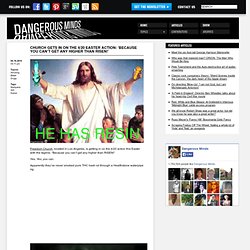 They made their reputation with an extraordinarily punishing and shockingly nihilistic take on no-wave music in the 1980s, culminating in the colossal masterpiece Children of God . Wall Worthy Superhero Cubist Art by Liam Brazier. Salvador Dalí Illustrates Alice in Wonderland, 1969. By Maria Popova UPDATE: At long last, a restored modern edition of this lost treasure. 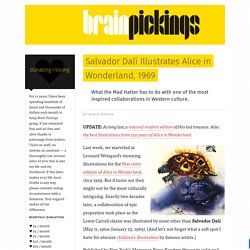 Also: the best illustrations from 150 years of Alice in Wonderland Last week, we marveled at Leonard Weisgard’s stunning illustrations for the first color edition of Alice in Wonderland, circa 1949. But it turns out they might not be the most culturally intriguing. Exactly two decades later, a collaboration of epic proportion took place as the Lewis Carroll classic was illustrated by none other than Salvador Dalí (May 11, 1904–January 23, 1989). Salvador Dalí Illustrates the Twelve Signs of the Zodiac. By Maria Popova From Aries to Pisces, by way of a confused lobster. 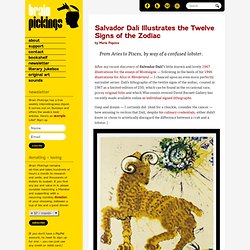 After my recent discovery of Salvador Dalí’s little-known and lovely 1947 illustrations for the essays of Montaigne — following in the heels of his 1946 illustrations for Alice in Wonderland — I chanced upon an even more perfectly surrealist series: Dalí’s lithographs of the twelve signs of the zodiac, created in 1967 as a limited-edition of 250, which can be found in the occasional rare, pricey original folio and which Wisconsin’s revered David Barnett Gallery has recently made available online as individual signed lithographs. Gasp and dream — I certainly did. (And for a chuckle, consider the cancer — how amusing to reckon that Dalí, despite his culinary credentials, either didn’t know or chose to artistically disregard the difference between a crab and a lobster.) Aries Taurus Gemini Cancer.

Edward Gorey’s Never-Before-Seen Letters and Illustrated Envelopes. By Maria Popova What a housefly has to do with Tim Burton and everything that makes snail mail great. It’s no secret I’m an enormous fan of Edward Gorey’s, mid-century illustrator of the macabre, whose work influenced generations of creators, from Nine Inch Nails to Tim Burton. Between September 1968 and October 1969, Gorey set out to collaborate on three children’s books with author and editor Peter F. Neumeyer and, over the course of this 13-month period, the two exchanged a series of letters on topics that soon expanded well beyond the three books and into everything from metaphysics to pancake recipes. Stunning Vintage Illustrations of Don Quixote by Spanish Graphic Design Pioneer Roc Riera Rojas. Donating = loving Brain Pickings remains ad-free and takes hundreds of hours a month to research and write, and thousands of dollars to sustain.

If you find any joy and value in it, please consider becoming a Member and supporting with a recurring monthly donation of your choosing, between a cup of tea and a good dinner: (If you don't have a PayPal account, no need to sign up for one – you can just use any credit or debit card.) Ábécés könyv on Behance. 22 Ways To Turn Your Life Into Amélie's Life - BuzzFeed Mobile. Hilda, 1950s Pinup Girl, Makes Us Very Happy.

The phrase "pinup girl" often conjures up images of hourglass figures and vintage fashion. But how often are the pin-ups we see actually plus-size women? Not often enough. That's why we're so excited that Hilda, originally drawn in the 1950s by illustrator Duane Bryers, resurfaced on the Internet this week. Burglars Return Loot To Group That Helps Sex Assault Victims : The Two-Way. (Update at 7:30 a.m. on Aug. 9: Click here for new information about efforts to help the agency pay for the damage done to its office.) Let's start our day with a feel-good story: The burglar (or burglars) who broke into the offices of the San Bernardino County (Calif.) Sexual Assault Services on July 31 and stole several computers and monitors apparently had a change of heart after finding out that the people at the agency help victims of sexual violence.

Morning Glory. The blooming Underground: RHS Chelsea Flower Show Tube Map. The 100th RHS Chelsea Flower Show is well under way: the blossoms have been installed, the gnomes have been allowed back in and the Royals have had a nose around. 1920's Ethereal Rhinestone-Wings Flapper Art-Deco Headpiece at 1stdibs. 1920's Cherries-Novelty Sequin Embroidery Gold-Lame Cloche Hat at 1stdibs. Second Alternate Victorian Harley Sketch by ~NoFlutter on deviantART. 10 Beautiful Words About Love That Don’t Exist in English. Phillip Valdez. St. Paul, MN Photos. CHEEKY SPANKING STORIES and 5 More Favorite Covers of 2012. Tell the Wolves I’m Home by Carol Rifka Brunt (The Dial Press) I love that this takes the classic silhouette image and incorporates it with other important images from the book.