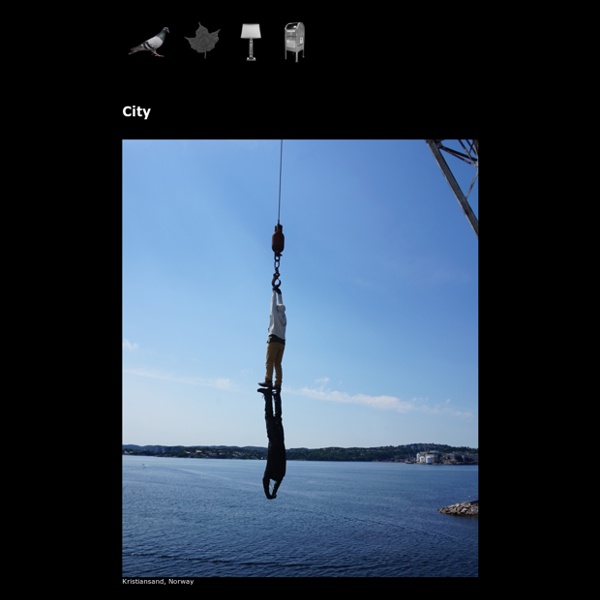 An Essay by Einstein "How strange is the lot of us mortals! Each of us is here for a brief sojourn; for what purpose he knows not, though he sometimes thinks he senses it. But without deeper reflection one knows from daily life that one exists for other people -- first of all for those upon whose smiles and well-being our own happiness is wholly dependent, and then for the many, unknown to us, to whose destinies we are bound by the ties of sympathy. Pedestrian Street Art by Peter Gibson Peter Gibson (aka Roadsworth) began painting the streets of Montreal in the fall of 2001. He was motivated by a desire for more bike paths in the city and a questioning of “car culture” in general. In the fall of 2004, Roadsworth was arrested for his nocturnal activities and charged with 53 counts of mischief. Despite the threat of heavy fines and a criminal record he received a relatively lenient sentence which he attributes in part to the public support he received subsequent to his arrest.Since that time, Roadsworth has received various commissions for his work and continues to be active in both visual art and music. Edit: the above artwork is by Banksy, also a great artist.

36 Pictures That Look Photoshopped – But Are Not The power of Photoshop is amazing, but still it doesn’t beat the power of imagination. Although many photos taken by professional photographers and enhanced in Photoshop can be absolutely stunning, the photos taken wisely and in a creative manner are even more impressive. Today’s showcase is dedicated to such photos, the ones that make people skeptical about not being manipulated and still they are genuine and impressive. They can be really inspiring and a pride to every photographer’s portofolio, no matter if they are funny, dramatic or just miracles of nature. 88 Brilliant Examples of Forced Perspective Photography Forced perspective is a technique that employs optical illusion to make an object appear farther away, closer, larger or smaller than it actually is. It is used primarily in photography, filmmaking and architecture. It manipulates human visual perception through the use of scaled objects and the correlation between them and the vantage point of the spectator or camera. There are many ways to attack photography and some are much more expensive than others.

Villemot Archives - The Wry Home About 13 years ago, my husband and I were celebrating a certain birthday I won’t share with you when we saw this poster in the window of a small shop. The brilliant green color and bird hat on this wonderful woman stopped both of us. The store was Galerie Documents at 53 rue de Seine.

Tribute To Graffiti: 50 Beautiful Graffiti Artworks - Smashing Magazine Advertisement Street culture and graffiti are well-known for being provocative, appealing, bold and uncompromising. Originally used by gangs to mark their territory in some urban area, graffitis have now become a rich medium for unrestricted expression of ideas and statements. In fact, creative designers and artists across the globe use this form of art to deliver their message and showcase their work. Probably the most prominent graffiti artist is Banksy1, a famous pseudo-anonymous British artist whose works focus on topics such as politics, culture, and ethics. His art has appeared in cities around the world; it’s worth mentioning that Banksy does not sell photos of street graffiti or mount exhibitions of screenprints in commercial galleries.

Still life: Bent objects UPDATE: The Return of Bent Objects Wires transform these objects from inanimate to hilarious works of art. Little polish girl McDonalds as Sculpture Materials Yeah, this is where those come from A Splash of Color by Rackat ...from Critique Club... Hi Rackat...ain't I lucky..they assigned your photo to me..ha FIRST IMPRESSION: Horrible shot...what were you thinking???? COMPOSITION: Totally off. It would have worked much better if it were upside down...and reversed horizontaly. TECHNICAL: Focus is toooo sharp.