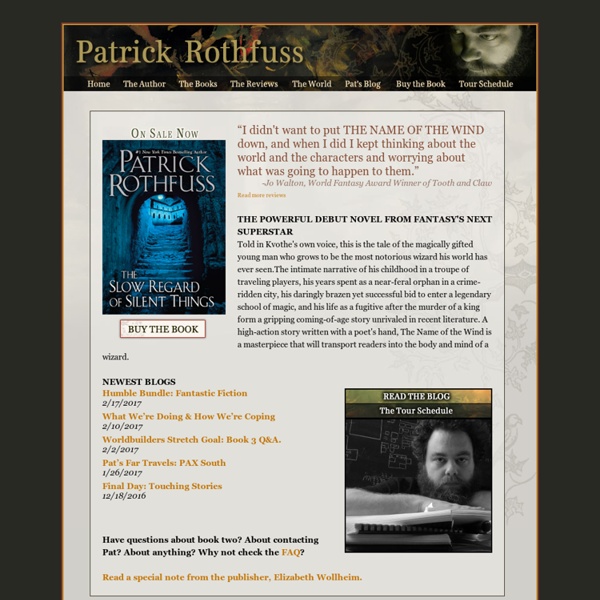 Read more reviews THE POWERFUL DEBUT NOVEL FROM FANTASY'S NEXT SUPERSTAR Told in Kvothe's own voice, this is the tale of the magically gifted young man who grows to be the most notorious wizard his world has ever seen.The intimate narrative of his childhood in a troupe of traveling players, his years spent as a near-feral orphan in a crime-ridden city, his daringly brazen yet successful bid to enter a legendary school of magic, and his life as a fugitive after the murder of a king form a gripping coming-of-age story unrivaled in recent literature. A high-action story written with a poet's hand, The Name of the Wind is a masterpiece that will transport readers into the body and mind of a wizard.

10 great science fiction novels that have been banned @djscruffy: And that's why you're a heathen and should be burned at the stake. @djscruffy: In defense of public schools, I would suggest that the reason many of these books are challenged so often is that they're frequently included in school curriculums and libraries. I grew up in a state that, according to these links, engaged in book-burning less than a decade before my birth. That makes me shudder. But I'm also the child of a public school teacher and am familiar with my mother's and many of her peers' views on children's reading materials.

Forums - 17th Shard, the Official Brandon Sanderson Fansite <div class='message error'><strong>Javascript Disabled Detected</strong><p>You currently have javascript disabled. Several functions may not work. Please re-enable javascript to access full functionality.</p></div><br /> Top 25 Best Fantasy Books This one is full to the brim with gritty, amoral, cynical dark humor. A different sort of fantasy, but one that's extremely refreshing, disturbing, and entertaining -- one of the best fantasy reads to come out the past couple years. Even as we near 2015, The Prince of Thorns still stands tall among other strong fantasy books. For a dark, gritty, anti-hero driven fantasy, I felt strong Abercrombie vibes. There's a strong influence from A Game of Thrones -- and if you've ever read KJ Parker's The Engineer trilogy, you'll see some similarities in the tone and style of world. The setting of the world is interesting too, a sort of post-apocalypse world gone to hell that sparks similarities to Jack Vance's Dying Earth world.

Great Poems « Greatest Books of All Time » Life-Changing Arts A selection of great poems from centuries of brillant authors and poets. Whether you are new to the world of poetry and wish to savor it, or a well-versed poetry connoisseur, either way you will probably enjoy the classics of world poetry. The poems are sorted by vote. To vote for a poem, click on the left of it. You can read and browse the poems by clicking on their title.

Project Aon: Main / Home (browse) Joe Dever has most generously offered to allow some of his books to be published on the internet thereafter to be downloaded free-of-charge. Rob Adams, Paul Bonner, Gary Chalk, Melvyn Grant, Richard Hook, Peter Andrew Jones, Cyril Julien, Peter Lyon, Peter Parr, Graham Round, and Brian Williams have also generously offered similar permission for their contributions to the world of Magnamund. Project Aon is a volunteer group of fans dedicated to publishing these works. "I would be especially pleased if my granting of the rights to distribute my books in this way was seen as my 'millennium gift' to all those devoted readers who have kept the Kai flag flying high, through all the good times, and the not-so-good.

Top 25 Best Science Fiction Books Love Science Fiction? Hate wasting time reading the trash? Then read this definitive guide to the Top 25 Science Fiction Books in the genre. Dracula My gosh, it's full of sex! by Mysticmidget, January 10, 2013 I agree with "somethingisbrokehere". I read through this summary to aid in an essay about this book and was positively shocked...though it gave me plenty of giggles! Dracula has many things about it which make it partly comedy to me, though of course it's only due to the change of the times. The thought of Bram Stoker reading this site's take on his novel is...oh, do try it, it is HILARIOUS.

post-tour and new Neil mailbox... Got home from the summer Zombie/Slayer tour to a huge pile of mail, much of it for Neil. I, of course, had very little time to blog in Europe and even less on the Canadian/US run. it was a beautiful summer, full of festival dates & new people... my wallet was full of many monies & Zombie guitar picks... I flew into LAX from Brussels at 10 pm on Monday night and Tuesday morning had me in a car service to meet Neil back at LAX at 10 am. Bram Stoker Abraham "Bram" Stoker (8 November 1847 – 20 April 1912) was an Irish novelist and short story writer, best known today for his 1897 Gothic novel Dracula. During his lifetime, he was better known as personal assistant of actor Henry Irving and business manager of the Lyceum Theatre in London, which Irving owned. Early life[edit] Stoker was born on 8 November 1847 at 15 Marino Crescent, Clontarf, on the northside of Dublin, Ireland.[1] His parents were Abraham Stoker (1799–1876), from Dublin, and Charlotte Mathilda Blake Thornley (1818–1901), who was raised in County Sligo.[2] Stoker was the third of seven children, the eldest of whom was Sir Thornley Stoker, 1st Bt.[3] Abraham and Charlotte were members of the Church of Ireland Parish of Clontarf and attended the parish church with their children, who were baptised there. Stoker was bedridden with an unknown illness until he started school at the age of seven, when he made a complete recovery. Early career[edit]

Cosmere - The Coppermind - 17th Shard The cosmere is a distinct universe totally separate from our own,[1] in which several of Brandon Sanderson's epic fantasy books take place. Overview[edit] As the cosmere implies a simultaneous existence of the ten Shardworlds (planets with mentionable Shardic Influence), cosmere books are connected by an overarching story. Once there was the mysterious power Adonalsium, whose true characteristic is still unknown. Due to unrevealed happenings in the cosmere the Shattering took place, which splintered Adonalsium in - suggested[2] - sixteen Shards each one of them holding a part of the original power of Adonalsium. Grimm's Fairy Tales This book contains 209 tales collected by the brothers Grimm. The exact print source is unknown. The etext appears to be based on the translation by Margaret Hunt called Grimm's Household Tales, but it is not identical to her edition. (Some of the translations are slightly different, the arrangement also differs, and the Grimm's scholarly notes are not included.) The etext received by the Universal Library did not include story titles. They have been restored in this edition, based on Hunt's titles.

Shard - The Coppermind - 17th Shard This page is exemplary! This page is comprehensive, well written, and cited. It is one of the excellent pages on the Coppermind. The Shards of Adonalsium, or Shards for short, are pieces of the power of creation itself.[1] They are named after a specific action or ideal, called an intent.