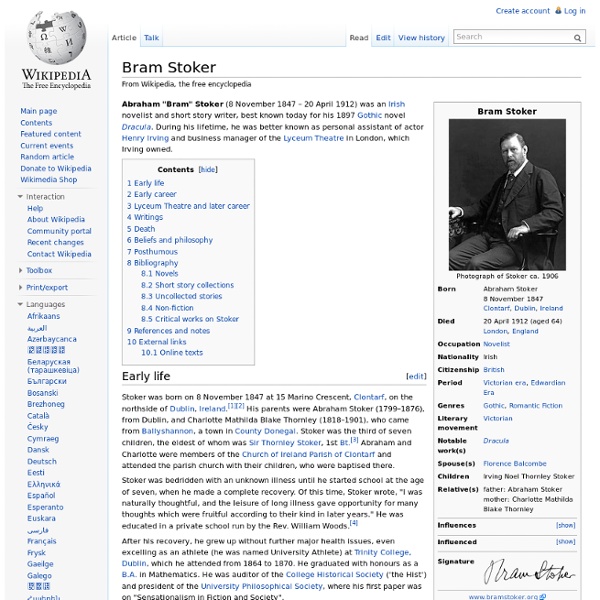 Abraham "Bram" Stoker (8 November 1847 – 20 April 1912) was an Irish novelist and short story writer, best known today for his 1897 Gothic novel Dracula. During his lifetime, he was better known as personal assistant of actor Henry Irving and business manager of the Lyceum Theatre in London, which Irving owned. Early life[edit] Stoker was born on 8 November 1847 at 15 Marino Crescent, Clontarf, on the northside of Dublin, Ireland.[1] His parents were Abraham Stoker (1799–1876), from Dublin, and Charlotte Mathilda Blake Thornley (1818–1901), who was raised in County Sligo.[2] Stoker was the third of seven children, the eldest of whom was Sir Thornley Stoker, 1st Bt.[3] Abraham and Charlotte were members of the Church of Ireland Parish of Clontarf and attended the parish church with their children, who were baptised there. Stoker was bedridden with an unknown illness until he started school at the age of seven, when he made a complete recovery. Early career[edit] Lyceum Theatre[edit]

Edgar Allan Poe Born in Boston, he was the second child of two actors. His father abandoned the family in 1810, and his mother died the following year. Thus orphaned, the child was taken in by John and Frances Allan, of Richmond, Virginia. Although they never formally adopted him, Poe was with them well into young adulthood. Poe switched his focus to prose and spent the next several years working for literary journals and periodicals, becoming known for his own style of literary criticism. Poe and his works influenced literature in the United States and around the world, as well as in specialized fields, such as cosmology and cryptography. Life and career Early life He was born Edgar Poe in Boston, Massachusetts, on January 19, 1809, the second child of English-born actress Elizabeth Arnold Hopkins Poe and actor David Poe, Jr. The Allan family had Poe baptized in the Episcopal Church in 1812. Poe moved back with the Allans to Richmond, Virginia in 1820. Military career Publishing career

M. R. James Early influences[edit] Scholarly works[edit] James is best known for his ghost stories, but his work as a medieval scholar was prodigious and remains highly respected in scholarly circles. Indeed, the success of his stories was founded on his antiquarian talents and knowledge. He catalogued many of the manuscript libraries of the Cambridge colleges. James also achieved a great deal during his directorship of the Fitzwilliam Museum in Cambridge [1893–1908]. James was Provost of Eton College from 1918 to 1936.[1] He died in 1936 and was buried in Eton town cemetery. Ghost stories[edit] James's ghost stories were published in a series of collections: Ghost Stories of an Antiquary (1904), More Ghost Stories of an Antiquary (1911), A Thin Ghost and Others (1919), and A Warning to the Curious and Other Ghost Stories (1925). According to James, the story must "put the reader into the position of saying to himself, 'If I'm not very careful, something of this kind may happen to me!'" Film[edit]

Bram Stoker's Dracula Bram Stoker's Dracula is a 1992 American horror fantasy erotic drama film directed and produced by Francis Ford Coppola, based on the novel Dracula by Bram Stoker.[3][4][5] It stars Gary Oldman as Count Dracula, Winona Ryder as Mina Harker, Anthony Hopkins as Professor Abraham Van Helsing, and Keanu Reeves as Jonathan Harker. Bram Stoker's Dracula was greeted by a generally positive critical reception and was a box office hit, although Reeves' performance has been widely criticised. Its score was composed by Wojciech Kilar and featured "Love Song for a Vampire" by Annie Lennox, which became an international hit, as the closing credits theme. Plot[edit] In 1462, Vlad Dracula, a member of the Order of the Dragon, returns from a victory against the Turks to find his wife, Elisabeta, has committed suicide after receiving a false report of his death. In 1897, newly qualified solicitor Jonathan Harker takes the Transylvanian Count Dracula as a client from his colleague R. Cast[edit] [edit]

The Body Snatcher The Body Snatcher (1884) is a short story by the Scottish author Robert Louis Stevenson. First published in the Pall Mall Christmas "Extra", in December 1884, the story is based on characters in the employ of Robert Knox, around the time of the Burke and Hare murders. Plot summary[edit] The story begins with a group of friends sharing a few drinks, when an eminent doctor, Wolfe MacFarlane, enters. One of the friends, Fettes, recognizes the name and angrily confronts the new arrival. Although his friends all find this behaviour suspicious, none of them can understand what might lie behind it . It transpires that MacFarlane and Fettes had attended medical school together, under the famous professor of anatomy, Robert Knox. On one occasion, Fettes identifies a body as that of a woman he knew, and is convinced she has been murdered. Later, Fettes meets MacFarlane at a tavern, along with a man named Gray, who treats MacFarlane in a rude manner. Film, TV and theatrical adaptations[edit]

Vlad the Impaler Vlad III, Prince of Wallachia (1431–1476/77), was a member of the House of Drăculești, a branch of the House of Basarab, also known by his patronymic name: Dracula. He was posthumously dubbed Vlad the Impaler (Romanian: Vlad Țepeș pronounced [ˈvlad ˈt͡sepeʃ]), and was a three-time Voivode of Wallachia, ruling mainly from 1456 to 1462, the period of the incipient Ottoman conquest of the Balkans. His father, Vlad II Dracul, was a member of the Order of the Dragon, which was founded to protect Christianity in Eastern Europe. Vlad III is revered as a folk hero in Romania as well as other parts of Europe for his protection of the Romanian population both south and north of the Danube. As the cognomen 'The Impaler' suggests, his practice of impaling his enemies is part of his historical reputation.[2] During his lifetime, his reputation for excessive cruelty spread abroad, to Germany and elsewhere in Europe. Name[edit] Bust of Vlad the Impaler in Sighișoara, his place of birth Family[edit]

Strange Case of Dr Jekyll and Mr Hyde Strange Case of Dr Jekyll and Mr Hyde is the original title of a novella written by the Scottish author Robert Louis Stevenson that was first published in 1886. The work is commonly known today as The Strange Case of Dr. Jekyll and Mr. Hyde, Dr. The work is commonly associated with the rare mental condition often spuriously called "split personality", referred to in psychiatry as dissociative identity disorder, where within the same body there exists more than one distinct personality.[4] In this case, there are two personalities within Dr Jekyll, one apparently good and the other evil; completely opposite levels of morality. Inspiration and writing[edit] Robert Louis Stevenson "In the small hours of one morning,[...]I was awakened by cries of horror from Louis. Lloyd Osbourne, Stevenson's stepson, wrote: "I don't believe that there was ever such a literary feat before as the writing of Dr Jekyll. Stevenson re-wrote the story in three to six days. Plot[edit] A year passes uneventfully.

THING FROM ANOTHER WORLD TRAILER 1951 HOWARD HAWKS Mary Shelley Mary Shelley (née Mary Wollstonecraft Godwin; 30 August 1797 – 1 February 1851) was an English novelist, short story writer, dramatist, essayist, biographer, and travel writer, best known for her Gothic novel Frankenstein: or, The Modern Prometheus (1818). She also edited and promoted the works of her husband, the Romantic poet and philosopher Percy Bysshe Shelley. Her father was the political philosopher William Godwin, and her mother was the philosopher and feminist Mary Wollstonecraft. Mary Godwin's mother died when she was eleven days old; afterwards, she and her older half-sister, Fanny Imlay, were raised by her father. In 1816, the couple famously spent a summer with Lord Byron, John William Polidori, and Claire Clairmont near Geneva, Switzerland, where Mary conceived the idea for her novel Frankenstein. Biography Early life Page from William Godwin's journal recording "Birth of Mary, 20 minutes after 11 at night" (left column, four rows down) Percy Bysshe Shelley Bath and Marlow