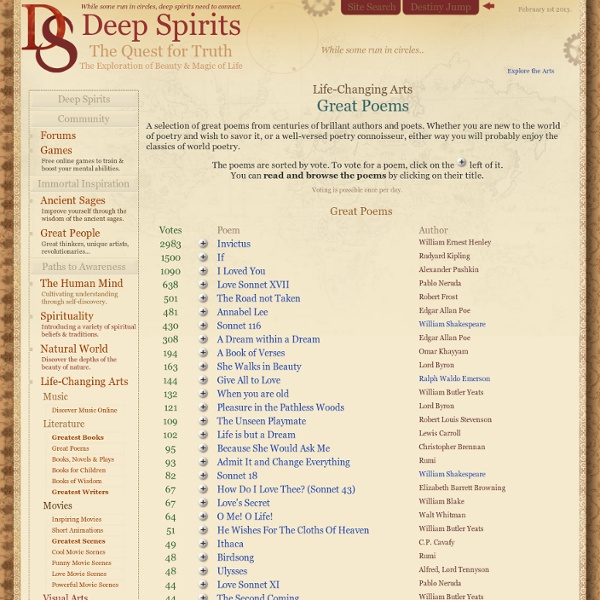 A selection of great poems from centuries of brillant authors and poets. Whether you are new to the world of poetry and wish to savor it, or a well-versed poetry connoisseur, either way you will probably enjoy the classics of world poetry. The poems are sorted by vote. To vote for a poem, click on the left of it. You can read and browse the poems by clicking on their title. Voting is possible once per day. Votes PoemAuthor IfRudyard Kipling EchoChristina Georgina Rossetti If you think the best poem of all times is not even on this list, by all means, let us know which poem it is and why you think it should be added. Get inspired.. inspire others.. Back to Greatest Books of All Time

Deep Underground Poetry : Welcome Siharyvani - Deep Underground Poetry Community Any questions? Help Advanced Search 10 great science fiction novels that have been banned @djscruffy: And that's why you're a heathen and should be burned at the stake. @djscruffy: In defense of public schools, I would suggest that the reason many of these books are challenged so often is that they're frequently included in school curriculums and libraries. I grew up in a state that, according to these links, engaged in book-burning less than a decade before my birth. That makes me shudder. But I'm also the child of a public school teacher and am familiar with my mother's and many of her peers' views on children's reading materials.

Do not stand at my grave and weep Do Not Stand at My Grave and Weep is a poem written in 1932 by Mary Elizabeth Frye. Although the origin of the poem was disputed until later in her life, Mary Frye's authorship was confirmed in 1998 after research by Abigail Van Buren, a newspaper columnist.[1] Full text[edit] The world's most awesome igloo. Pegman vs. Clippy. SCORE 141 New Page 1 Back to ContentsRubik's Cube Solution: How to put together a mixed-up Rubik's cube, most of the time with your eyes closed, and manipulating the cube above your head, or behind your back. My record time using this method was 2 minutes 13 seconds. Just memorize the following formula (it's easy!)

postmodernism in poetry To repeat a previous simplification: whereas Classicism, Realism and Romanticism all deal with the outside world, contemporary literature, by contrast, is commonly a retreat into the writer's consciousness — to make autonomous creations that incorporate diverse aspects of modern life (Modernism), or free-wheeling creations constructed of a language that largely points to itself (Postmodernism). Postmodernism began in the sixties, when there developed on both sides of the Atlantic a feeling that poetry had become too ossified, backward-looking and restrained. {1} The old avant garde had become respectable, replacing one orthodoxy by another. The poetry commended by the New Criticism — and indeed written by its teachers — was self-contained, coherent and paradoxical. Certainly it was clever, with striking imagery, symbolism and structural economy, but it was also far too predictable. Where were the technical innovations of the early modernists?

Dracula My gosh, it's full of sex! by Mysticmidget, January 10, 2013 I agree with "somethingisbrokehere". I read through this summary to aid in an essay about this book and was positively shocked...though it gave me plenty of giggles! Dracula has many things about it which make it partly comedy to me, though of course it's only due to the change of the times. The thought of Bram Stoker reading this site's take on his novel is...oh, do try it, it is HILARIOUS. Though I Am Young and Cannot Tell accent: emphasis given a syllable in ordinary usage, as provided by a pronouncing dictionary. See also stress. accentual-syllabic: