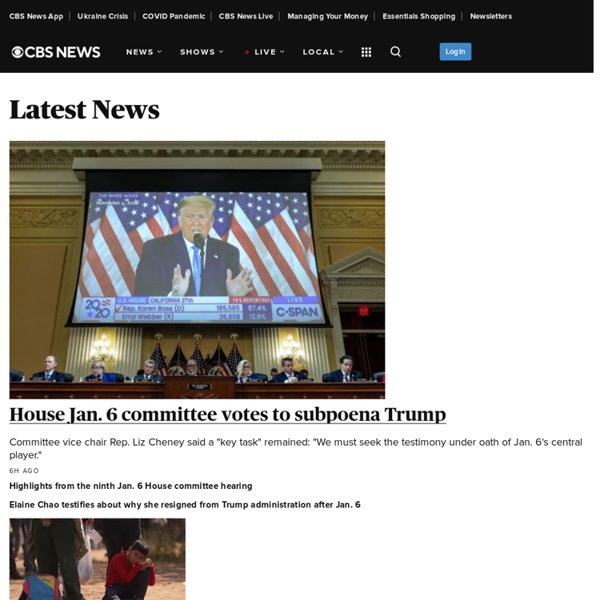 Atlantic City Press If some state legislators get their way, the aftermath of Hurricane Sandy could bring an end to one Jersey Shore tradition — the beach badge. State Sen. Michael Doherty, R-Hunterdon, Warren, and Senate President Stephen Sweeney, D-Salem, Gloucester, Cumberland, have introduced legislation requiring any town that accepts state or federal aid for rebuilding its beaches to provide beach and restroom access for free. The Non-Innovators Guide to Business Innovation Last Updated Oct 27, 2011 9:36 AM EDT Trying to be innovative feels, at least for most people, nearly impossible. Don't believe me? Go ahead. Be innovative.

White House complains about CBS News blog post saying that possi The White House ripped CBS News on Thursday for publishing an online column by a blogger who made assertions about the sexual orientation of Solicitor General Elena Kagan, widely viewed as a leading candidate for the Supreme Court. Ben Domenech, a former Bush administration aide and Republican Senate staffer, wrote that President Obama would "please" much of his base by picking the "first openly gay justice." An administration official, who asked not to be identified discussing personal matters, said Kagan is not a lesbian. CBS initially refused to pull the posting, prompting Anita Dunn, a former White House communications director who is working with the administration on the high court vacancy, to say: "The fact that they've chosen to become enablers of people posting lies on their site tells us where the journalistic standards of CBS are in 2010." The network deleted the posting Thursday night after Domenech said he was merely repeating a rumor.

Cronkite News From sink to garden: Gray water systems catching on in Tucson Tuesday, April 15, 2014 Since 2008, Tucson has required plumbing in new homes to allow homeowners to set up gray water systems to reuse water from bathroom sinks, showers and tubs as well as washing machines to water plants and lawns. But the systems have yet to catch on in the Valley. Coltin Gerhart follows brothers’ path in football, blazes his own in baseball Sports run in Coltin Gerhart's blood: Two older brothers have played in the NFL and one, Garth, was a standout lineman at Arizona State University.

Logiciel Tagaini Jisho Tagaini Jisho is a free, open-source Japanese dictionary and kanji lookup tool that is available for Windows, MacOS X and Linux and aims at becoming your Japanese study assistant. It allows you to quickly search for entries and mark those that you wish to study, along with tags and personal notes. It also let you train entries you are studying and follows your progression in remembering them. Finally, it makes it easy to review entries you did not remember by listing them on screen or printing them on a small booklet. Tagaini Jisho also features complete stroke order animations for more than 6000 kanji. Features

What overqualified really means Okay, if you have been searching for a job long enough chances are you will hear this dreaded phrase, “Sorry, but you’re overqualified for the position.”Sure on one hand it is a compliment that someone thinks you are too good to be working for them, but on the other hand you still have to eat and being overqualified is not putting food on the table. In case the term “overqualified” has been an enigma wrapped up in a mystery for you, let me tell you what employers really mean when they throw that word around. Let the demystification begin… (Insert the sounds of monks chanting here)

So Is She Gay? - The Daily Dish It is no more of an empirical question than whether she is Jewish. We know she is Jewish, and it is a fact simply and rightly put in the public square. If she were to hide her Jewishness, it would seem rightly odd, bizarre, anachronistic, even arguably self-critical or self-loathing. And yet we have been told by many that she is gay ... and no one will ask directly if this is true and no one in the administration will tell us definitively. PEW Research Rates Trustworthiness Our recent report, Political Polarization and Media Habits, finds that trust and distrust in the news media varies greatly by political ideology. Many readers asked us: Among the 36 news organizations we asked about, which one do Americans trust most? The answer is more complex than it may seem and can be measured in a number of different ways. Here’s a breakdown: The full population picture doesn’t tell the whole story. If you look simply at the total percentage of online adults who say they trust a news organization for news about government and politics, several mainstream television outlets rise to the top.