Voices of the US of A

WATCH: Corey Lewandowski stuns ‘The View’ with over the top rant about ‘killer’ Trump. The states where voters have the most control over the election - Axios. The Rohingya are a minority ethnic group in Myanmar's Rakhine State who have inhabited the region for centuries. 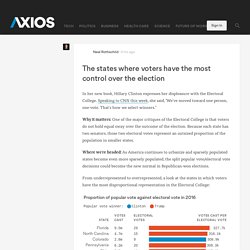 As a mostly Muslim ethnicity, they stand out in Buddhist Myanmar — amplified by the fact that they have darker skin and speak a different language. The reason for persecution: As Rohingya expert Azeem Ibrahim told New York Magazine, the Rohingya were chosen as a scapegoat for the failure of the (then) Burmese government's communist reforms during the 1960s.

Their non-Buddhism was used against them by the reigning military government, allowing their persecution to become institutionalized. Something you should know about Myanmar: The country adheres to a more militant type of Buddhism than is usually imagined in the West.The heart of the problem: The Burmese government passed a law in 1982 that denied the Rohingya from gaining citizenship, formalizing the nation's repudiation against them. Open Thread - The Onion Presents A Trump Voter Betrayed. Best Ann Coulter Burns from Comedy Central Roast of Rob Lowe. Ann Coulter has been having a tough few weeks. 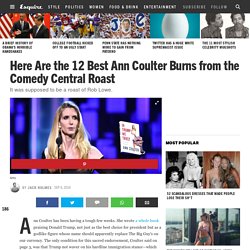 She wrote a whole book praising Donald Trump, not just as the best choice for president but as a godlike figure whose name should apparently replace The Big Guy's on our currency. The only condition for this sacred endorsement, Coulter said on page 3, was that Trump not waver on his hardline immigration stance—which Trump promptly did on the very day the book came out. Advertisement - Continue Reading Below. Hillary Clinton strategist says "kill" Julian Assange, because "a dead man can't leak stuff" [Video] Democratic strategist, CNN Host, former Fox News Host, and Hillary Clinton supporter Bob Beckel… has figured out how to deal with the Julian Assange thorn, that is in Clinton’s side… 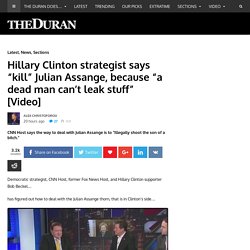 Kansas To Shun Refugees From Every Country In The World. Fired for feeding a hungry kid: A cafeteria worker’s good deed turns to bureaucratic nightmare. Congratulations, Idaho’s Pocatello School District. 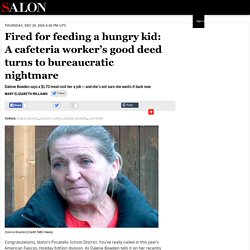 You’ve really nailed in this year’s American Fiascos, Holiday Edition division. As Dalene Bowden tells it on her recently launched GoFundMe page, “I was a lunch lady at Irving Middle School. I was placed on unpaid leave Tuesday after I gave a free lunch to a 12-year-old student who didn’t have money to pay for her hot lunch.” Bowden says that earlier this month, she was placed on leave after giving a hot lunch to a 12 year-old girl who said she didn’t have the money to pay for it. Solar Farm Rejected Amid Fears It Will 'Suck Up The Sun's Energy' ‘Is it safe, is it not safe?’: Fox host speculates metric system brought down AirAsia flight. Donald Trump: ‘Political correctness’ made NFL go easy on woman-punching player. By David EdwardsMonday, September 8, 2014 8:57 EDT. 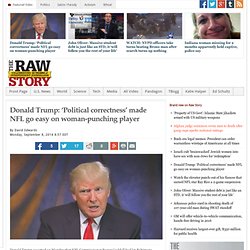 Poor-Off. Catholic Iraqi refugee attacked, beaten in NM by man who thought she was Muslim. By David FergusonThursday, June 12, 2014 11:24 EDT An Albuquerque woman was attacked in her home and her family’s U.S. citizenship papers were torn up by a man who incorrectly believed that she was Muslim. 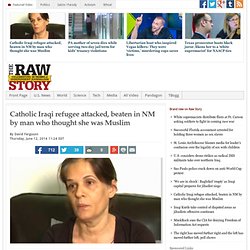 Albuquerque’s KRQE Channel 13 reported that, ironically, the woman and her family are Catholic Iraqis who fled that country six years ago to escape religious persecution. Texas prosecutor boots black juror, likens her to a ‘white supremacist’ for NAACP ties. By David EdwardsThursday, June 12, 2014 8:16 EDT A Texas prosecutor lost his job this week after he rejected a black juror because he said that her membership in the NAACP was like being a white supremacist. 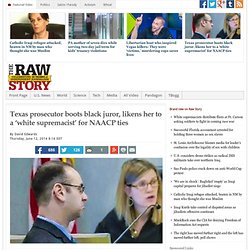 According to a transcript obtained by KVUE, Travis County felony prosecutor Steve Brand told the judge that he was removing the woman because of her NAACP ties, but it was “not because of race.” “It’s because in part she appeared to be an activist, and that’s what we don’t want,” he said. “Just as if she was white, we wouldn’t want a white activist or a white supremacist.” State District Judge Julie Kocurek later ordered a new jury to be seated after a judge ruled that Brand had removed the woman solely because of race. Travis County District Attorney Rosemary Lehmberg told KVUE that she fired the top prosecutor because she was offended by his remarks at the recent hearing. Tex Mess: Rick Perry goes to San Francisco, compares homosexuality to alcoholism. By David FergusonThursday, June 12, 2014 7:59 EDT At a speaking event in San Francisco on Wednesday, Gov.

Rick Perry (R-TX) stunned listeners by comparing homosexual attraction to alcoholism, and said that LGBT people can choose whether or not to participate in their “lifestyle.” The San Francisco Chronicle reported that Perry was addressing the Commonwealth Club of California when he made the remarks, which drew a “murmur of disbelief” from the assembled crowd. The governor was responding to a question from an audience member, who asked Perry if he supported the 2014 Texas Republican Party platform. St. Louis Archdiocese blames media for leader’s confusion over the legality of sex with children. 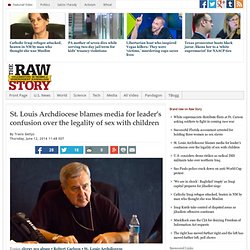 'Empathetically Correct' Is the New Politically Correct - Karen Swallow Prior. When I was attending graduate school in the late 1980s and early 1990s, political correctness reigned supreme. 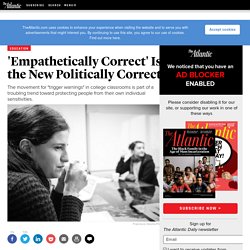 Lassoing the powers of language, literature, and the law, the movement dubbed “PC” initially worked toward the good goal of greater inclusiveness for marginalized communities. Americans Want Congress Members To Pee In Cups To Prove They're Not On Drugs. WASHINGTON -- While most Americans like the idea of drug testing for welfare recipients, they LOVE the idea of drug testing for members of Congress. According to a new HuffPost/YouGov poll, 64 percent of Americans favor requiring welfare recipients to submit to random drug testing -- a measure pushed by Republican lawmakers in recent years -- while 18 percent oppose it. But an even stronger majority said they're in favor of random drug testing for members of Congress, by a 78 percent to 7 percent margin. Sixty-two percent said they "strongly" favor drug testing for congressional lawmakers, compared to only 51 percent who said the same of welfare recipients.

The House of Representatives passed legislation this year that would allow states to require food stamp recipients to pee in cups to prove they're not on drugs. In 2012, Republicans pushed for drug testing of people seeking unemployment insurance benefits when they lose their jobs. Dana Perino Is 'Tired Of Atheists'; Fox News Host Says 'They Don't Have To Live Here' Freedom of belief doesn't appear to be important to Fox News host Dana Perino, who suggested that if atheists don't like having "under God" in the Pledge of Allegiance, well, "they don't have to live here.

" Massachusetts' highest court is currently hearing a case against the Pledge brought by atheist parents, who feel that due to its religious wording, atheist children "are denied meaningful participation in this patriotic exercise. " The case specifically involves the phrase, "under God," which was not actually a part of the original phrasing of the Pledge. Regarding atheists, Perino said during a live segment, "I'm tired of them. " Lee Camp: The Zimmerman Trial Goes Much Deeper Than The Media Will Tell You. Colbert Reacts To George Zimmerman Verdict: Racial Inequality 'Is Now A Tie' Texas Passes Sweeping Abortion Restrictions. Rallies Against Zimmerman Verdict Held Across U.S.