Traveling Miles. DISCLAIMER: Do I need them at this point? 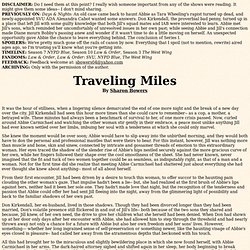 I really wish someone important from any of the shows were reading. It might give them some ideas-- I don't mind sharing. PREVIOUSLY ON: Days & Nights: An old case came back to haunt Abbie as Tara Wheeling's rapist turned up dead, and newly-appointed SVU ADA Alexandra Cabot wanted some answers. Don Kirkendall, the proverbial bad penny, turned up in a place that left Jill with some guilty knowledge that both Jill's squad mates and IAB were interested to learn. Abbie met Jill's sons, which reminded her uncomfortably of unresolved issues in her own past; while seeing Abbie and Jill's connection made Diane mourn Bobby's passing anew and wonder if it wasn't time to do a little moving on herself. Traveling MilesBy Sharon Bowers It was the hour of stillness, when a lingering silence demarcated the end of one more night and the break of a new day over the city. Don Kirkendall, her ex-husband, lived in those shadows. "Who says I want you to?

" "But... " Fusion. DISCLAIMER: Law & Order: Trial By Jury and all characters are property of NBC and Dick Wolf. 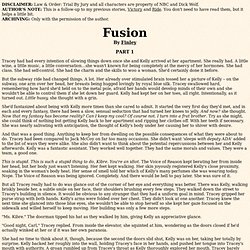 AUTHOR'S NOTE: This is a follow-up to my previous stories, Victory and Ride. You don't need to have read them, but it helps a little bit. Wake-Up Call. DISCLAIMER: Law & Order: Trial By Jury and all characters are property of NBC and Dick Wolf. 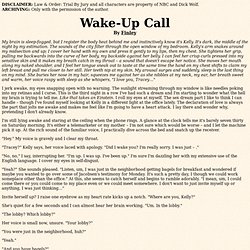 ARCHIVING: Only with the permission of the author. Wake-Up CallBy Finley My brain is sleep-fogged, but I register the body heat behind me and instinctively know it's Kelly. It's dark, the middle of the night by my estimation. The sounds of the city filter through the open window of my bedroom. I jerk awake, my eyes snapping open with no warning. I'm still lying awake and staring at the ceiling when the phone rings. "Hey. " "Tracey? " Flow Sweetly, Hang Heavy (You Suddenly Complete Me) DISCLAIMER: Law & Order: CI and its characters are the property of Dick Wolf and NBC. 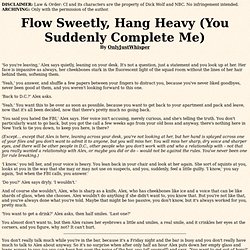 No infringement intended. ARCHIVING: Only with the permission of the author. Flow Sweetly, Hang Heavy (You Suddenly Complete Me)By OnlyJustWhisper 'So you're leaving,' Alex says quietly, leaning on your desk. Gravity of Love. Going A-Viking. DISCLAIMER: They are not mine, I'm just rubbing them together to see what happens. The story however, is mine... AUTHOR'S NOTE: What or who is Beck? ( It is a Swedish Detective Series, that is actually a set of several TV movies that deal with the daily lives and cases of homicide detectives in Stockholm.

The movies revolve around a lead detective called Martin Beck, but Alice is so much more interesting for me. The movies are interesting, engrossing and well made, I recommend them; the movies are in Swedish and subtitled into Finnish, so have patience with me and my interpretations... Going A-VikingBy The Raven ADA Serena Southerlyn was not amused...

For reasons that she could not quite comprehend, her boss had decided that she was the ideal candidate to go and fetch someone from the airport. 'Well, not just someone...' Right now, she was just impatiently waiting and silently fuming... 'Maybe this won't be such a bad thing after all, hmmm? ' "Detective Levander? " "Yes, I am she. " Pearls. DISCLAIMER: Law & Order and Law & Order: Trial By Jury are the property of NBC and Dick Wolf. No infringement intended. FANDOMS/PAIRING: Law and Order: Trial by Jury/Law and Order Tracey Kibre/Serena Southerlyn ARCHIVING: Only with the permission of the author. PearlsBy Fewthistle Serena watched from the doorway as Tracey stared pensively out the window beside the kitchen table.

From the eighth floor of Serena's apartment building, the street below was a black streak littered here and there with rectangles in a myriad of colors, taillights garish and blood red against the wet pavement. "What is it? " The tick of the cheap clock built in to the stove marked the seconds, until finally Tracey murmured, "Nothing. "Liar," Serena accused just as gently, an indulgent smile pausing for a moment on her lips. "With the damn rain, I knew that there was no chance of catching a cab, so I took the subway home. She paused, seeming to have lost her train of thought. "And then, do you know what happened?

Pilgrimage. DISCLAIMER: Law & Order: Trial By Jury & Law & Order and all their characters are property of NBC and Dick Wolf. 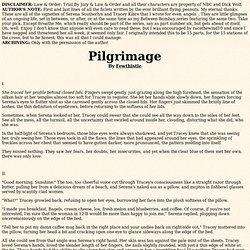 AUTHOR'S NOTE: First and last lines of all the ficlets written by the ever brilliant flying_peanuts. My eternal thanks. These are all of the vignettes of Serena Southerlyn and Tracey Kibre that I wrote for even_angels_. They are little glimpses of an ongoing life, set in between, or after, or at the same time as my Between Bombay series featuring the same two. Something Here Inside. The A.D.A.'s Office. Ó2008 by Patricia L. 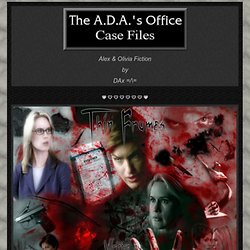 Givens Dr. Huang looked at each of the forensic photos closely before he taped them to the clear case board that had been wheeled into the conference room. Normally this type of session would take place in the bullpen, but with a judge involved, discretion was a moral imperative. When he was done, he stepped back, rubbing his chin thoughtfully with one hand while he flipped through the case notes in the file.

Cabin Fever Chapter 21, a law and order: svu fanfic. This is it. 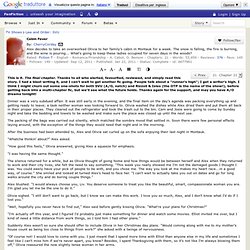 The final chapter. Thanks to all who alerted, favourited, reviewed, and simply read this story. I had a blast writing it, and I can't wait to get another fic going. Magnetic Resistance Chapter 1: Part One, a law and order: svu fanfic. Pairing: Alex/Olivia (Serena/Abbie) Spoilers: SVU up to Season-11 (including Loss, Ghost, and beyond) AN: For my Mistress. 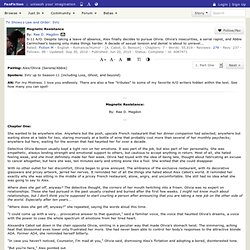 I love you endlessly. There are also a few "tributes" to some of my favorite A/O writers hidden within the text. See how many you can spot!