Photography and the Law

Is the end near for copyright? • Copyright Tarnished •Is the time approaching when copyright protection will fade away. 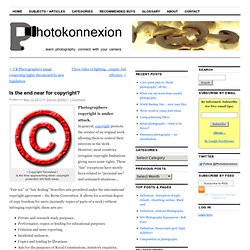 Photographers copyright is under attack. In general, copyright protects the creator of an original work allowing them to control their interests in the work. However, most countries recognise copyright limitations giving users some rights. These “fair” exceptions have mostly been related to “personal use” and contained situations… “Fair use” or “fair dealing” describes acts permitted under the international copyright agreement – the Berne Convention. Private and research study purposes.Performance, copies or lending for educational purposes.Criticism and news reporting.Incidental inclusion.Copies and lending by librarians.Acts for the purposes of Royal Commissions, statutory enquiries,Judicial proceedings and parliamentary purposes.Recording of broadcasts for the purposes of listening to, or viewing, at a more convenient time. For photographers this is a huge problem.

The problem My image “Wolf!” Street photography and the law: 7 things you need to know. Venturing out onto the streets with your camera can be an intimidating prospect. 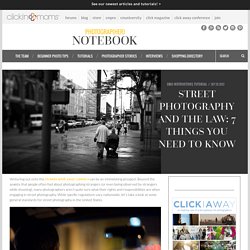 Beyond the anxiety that people often feel about photographing strangers (or even being observed by strangers while shooting), many photographers aren’t quite sure what their rights and responsibilities are when engaging in street photography. While specific regulations vary nationwide, let’s take a look at some general standards for street photography in the United States. 1.

Model releases are generally not required… This is one of the biggest misconceptions about what is required when photographing people. 2. … but use common sense. There are certain exceptions to the above generalization, most of them related to a person’s “reasonable expectation of privacy.” If someone waves you off when you try to photograph him or her, you may be well within your legal rights to take the shot, but ask yourself if it’s worth the verbal or even physical altercation that it may yield. Protecting Privacy, Limiting Street Photography. Hungary law requires photographers to ask permission to take pictures. Those planning a weekend break in Budapest take note. 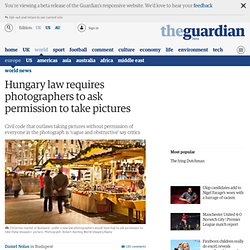 From 15 March anyone taking photographs in Hungary is technically breaking the law if someone wanders into shot, under a new civil code that outlaws taking pictures without the permission of everyone in the photograph. According to the justice ministry, people taking pictures should look out for those who are are aware they are about to be photographed and are not waving in protest, nor trying to hide or run out of shot. Officials say expanding the law on consent to include the taking of photographs, in addition to their publication, merely codifies existing court practice.

However, Hungary's photographers call the law vague and obstructive, saying it has left the country of Joseph Pulitzer and photography legend Robert Capa out of step with Europe. Ákos Stiller, a photojournalist at the weekly HVG, the New York Times and Bloomberg, says the new regulation is another unwanted complication for his profession in Hungary.

Photography & the Law. Videotaping and Photography on Private Property - Lawyers.com. Sometimes, whether a photograph or videotape was legally taken depends on the location where it was taken, and the photographer's status to be on that property. 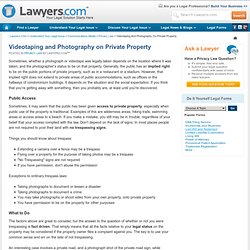 Generally, the public has an implied right to be on the public portions of private property, such as in a restaurant or a stadium. However, that implied right does not extend to private areas of public accommodations, such as offices or the hallways of condominium buildings. Legal Rights of Photographers. Photography and The Law: Know Your Rights. Say you’re out for a photographic stroll, taking pictures of that cool old power plant on the edge of town. 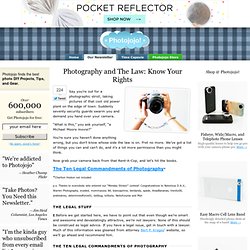 Suddenly seventy security guards swarm you and demand you hand over your camera. “What is this,” you ask yourself, “a Michael Moore movie?” You’re sure you haven’t done anything wrong, but you don’t know whose side the law is on. Fret no more. We’ve got a list of things you can and can’t do, and it’s a lot more permissive than you might think. Now grab your camera back from that Rent-A-Cop, and let’s hit the books.

The Ten Legal Commandments of Photography* *Charlton Heston not included. Discussing Photographer's Rights - United States of America in Photographers' Rights. ...Steve says: Public Spaces Under current US legislation, you are entitled to photograph anything that you want to from a public space and that includes people and things, except where a specific law prohibits such activity. 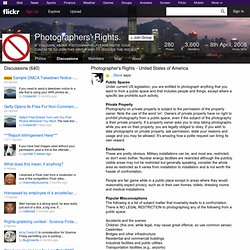 Private Property Photography on private property is subject to the permission of the property owner. Know Your Rights: Photography in Public. Photography and the law. A "No Photography" sign, commonly placed in properties where taking photographs is illegal or objected to by the owner (though in some jurisdictions, this is not a legal requirement). 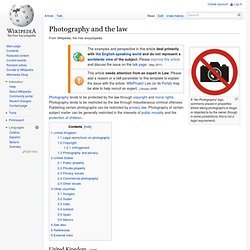 United Kingdom[edit] Legal restrictions on photography[edit] Mass photo gathering in UK. In general under the law of the United Kingdom one cannot prevent photography of private property from a public place, and in general the right to take photographs on private land upon which permission has been obtained is similarly unrestricted. However, landowners are permitted to impose any conditions they wish upon entry to a property, such as forbidding or restricting photography.

Persistent or aggressive photography of a single individual may come under the legal definition of harassment.[4] Photography of certain subject matter is restricted in the United Kingdom. Copyright[edit] Certain photographs may not be protected by copyright. Infringement[edit] Photography and privacy[edit]