A Huge Fire in the Amazon Threatens Thousands of Indigenous People and an Uncontacted Tribe. A fire burning across northern Brazil for the past two months has scorched nearly half of the Arariboia indigenous territory in the state of Maranhão. 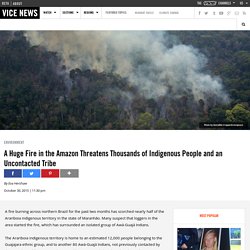 Many suspect that loggers in the area started the fire, which has surrounded an isolated group of Awá-Guajá Indians. The Arariboia indigenous territory is home to an estimated 12,000 people belonging to the Guajajara ethnic group, and to another 80 Awá-Guajá Indians, not previously contacted by the outside world. The star witness in a case pitting rainforest villagers against a multinational oil giant has admitted to lying under oath in an effort to help Chevron avoid paying a $9.5 billion judgment for deliberate pollution of the Ecuadorian Amazon : worldnews. Last Week Tonight with John Oliver: North Dakota (HBO) Volkswagen: The scandal explained. Image copyright Getty Images What is Volkswagen accused of? 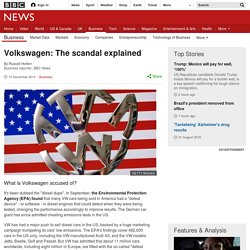 It's been dubbed the "diesel dupe". In September, the Environmental Protection Agency (EPA) found that many VW cars being sold in America had a "defeat device" - or software - in diesel engines that could detect when they were being tested, changing the performance accordingly to improve results. Prince528 comments on “No, you don’t.” That was the crowd’s grumbling response Tuesday night each time a Duke Energy representative said she empathized with people whose wells near the company’s coal ash ponds had been declared contaminated. “I know how y. Taser's Delirium Defense. By all accounts, Patrick Lee was having too good a time at the Mercy Lounge, a Nashville rock club. 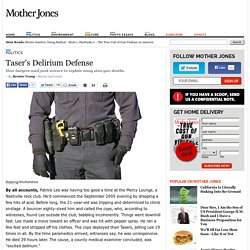 He'd commenced the September 2005 evening by dropping a few hits of acid. Before long, the 21-year-old was tripping and determined to climb onstage. A bouncer eighty-sixed him and called the cops, who, according to witnesses, found Lee outside the club, babbling incoherently. Things went downhill fast. Lee made a move toward an officer and was hit with pepper spray. For the past five years, this has been a common conclusion in deadly incidents involving Tasers, and the nation's top seller of electric stun guns prefers it that way; Taser International Inc. has twice sued medical examiners who cited its products as a contributing factor in a subject's death. Taser's lone courtroom defeat, which it may appeal, involves Robert Heston, a California meth user who died after 25 jolts. Five Big Banks Plead Guilty to Rigging Currency Markets and No One Goes to Jail. James S. 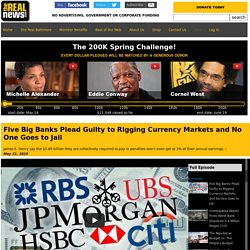 Henry say the $5.89 billion they are collectively required to pay in penalties won't even get at 3% of their annual earnings. . - Bio James S. Transcript SHARMINI PERIES, EXEC. End DISCLAIMER: Please note that transcripts for The Real News Network are typed from a recording of the program. Comments Our automatic spam filter blocks comments with multiple links and multiple users using the same IP address. Regulators are announcing penalties against some of the world’s biggest banks for their role in manipulating the foreign exchange markets. Banks fined over foreign exchange rigging; Greek default fears grow - as it happened. Our City editor, Jill Treanor, has helpfully written a Q&A about the forex scandal, to help explain today’s fines. 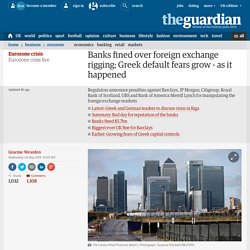 There is no equivalent of a stock exchange for currencies. Many of them have nicknames. Such is the size of the market, dealers trade in millions, and often billions (known as yards). Why does it matter? The prices of currencies have an impact on everyone, from holidaymakers to companies manufacturing cars or selling clothes. Iceland’s jailed bankers ‘a model’ for dealing with ‘financial terrorists’ — RT Op-Edge. Published time: December 14, 2013 15:05 By jailing four top officers of Iceland's failed Kaupthing Bank, the country showed the world the right way to deal with the people largely responsible for the 2008 financial crisis, said Charlie McGrath, founder of news website, Wide Awake News. 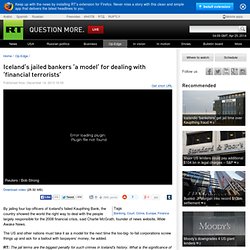 The US and other nations must take it as a model for the next time the too-big- to-fail corporations screw things up and ask for a bailout with taxpayers’ money, he added. RT: The jail terms are the biggest penalty for such crimes in Iceland's history. What is the significance of the precedent? Charlie McGrath: It’s significant in regards to the 2008 crisis, if you happen to be living here in the United States, where the majority of these too-big-to-fail institutions are headquartered, where the true corporates are, where the CEOs and COOs of these massive corporations live.

So we see an actual government, an actual people and nation stepping up and saying: “I’m sorry, you committed fraud.