Women's Voices, An Oral History of Israeli & Palestinian Women. “to get it out of your system” Helen Khadder. “superglue on the soles of our feet” Anita Tucker. “like something has been done to my vision” Edna Gorney. You know, I grew up in Israel and the Hula Valley was always a very strong national symbol, of the triumph of engineering and science over nature, over swamps and diseases… The Hula is a wetland that was drained during the 50s, and a very small part of it was recreated as a nature reserve….with severe ecological effects, detrimental to the water quality of the Kineret. 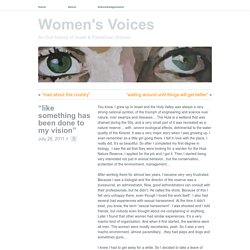 It was a very major story when I was growing up. I even remember as a little girl going there. “waiting around until things will get better” Maria Khoury. I grew up with strict Greek parents who were extremely upset when I married a Palestinian, the only non-Greek person at the Greek-Orthodox Christian theological college in Boston. 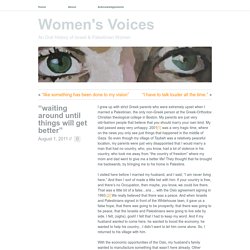 My parents are just very old-fashion people that believe that you should marry your own kind. My dad passed away very unhappy. 2001[1] was a very tragic time, where on the news you only see just things that happened in the middle of Gaza. “It’s hard to express it” Hala Abu Shareb. First of all, I would describe myself as Muslim. 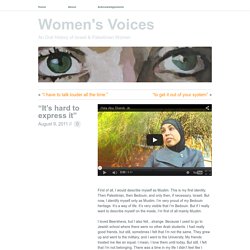 This is my first identity. “like something has been done to my vision” Edna Gorney. “We’re coming in Solidarity.” Sharon Goldberg and Sara Benninga. “like the aboriginal in Australia” Rania Laham-Grayeb. I was actually born in Israel, in a village called Shefamer, which is 40 miles outside of Haifa. 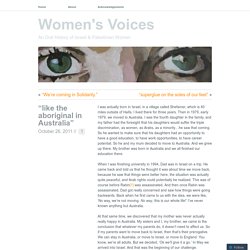 I lived there for three years. Then in 1979, early 1979, we moved to Australia. I was the fourth daughter in the family, and my father had the foresight that his daughters would suffer the triple discrimination, as women, as Arabs, as a minority…he saw that coming. So he wanted to make sure that his daughters had an opportunity to have a good education, to have work opportunities, to have career potential. So he and my mum decided to move to Australia. “On a woman-to-woman level” Paula Mills. The front page of the news in November 1992 was a story of a young girl who was either 12 or 13 or 14 years old, and lived in a kibbutz, in a settlement very much like our settlement. She had been gang-raped by 11 boys. And this was the first time that this kind of a story had ever hit the news. It was extremely sensational. The judge basically exonerated the 11 boys from having committed rape on the basis that the girl didn’t say no….And I heard the headlines in the morning, and somehow the news just sunk all the way down to my feet. My daughter at the time was 8 or 9, and I thought, I could absolutely see this happening anywhere in Israel. The same day the news came out I came to the Women’s Center. “I think I am a strong woman” Rafah Enibtawi. “she could sleep through the fire” “I decided, I could live here” Geri Bernstein Freund. Tekoa[1], in those days, in 1981, it was…a few families living in little “eshkubiot” they were called, little concrete boxes with dirt paths (laughs). 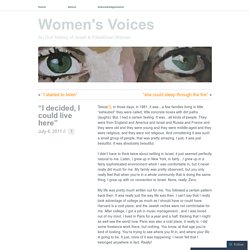 But, I had a certain feeling. It was…all kinds of people. They were from England and America and Israel and Russia and France and they were old and they were young and they were middle-aged and they were religious, and they were not religious. “I started to listen” Mor Efrat. “stuck in the middle” It’s very rare for Druze* to live in Eilat because most of the Druze live in villages in the north. But my father left the village when he was very young because he went to study. It’s very rare. My mother married him when she was 17. She didn’t know Hebrew at all. And actually in those days, people didn’t even leave their village! Maintaining Druze identity was really the big issue for them. “talking and fighting” My grandmother never talked about it, never ever. 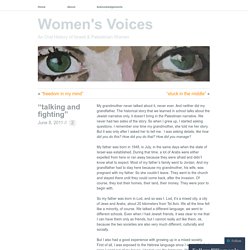 And neither did my grandfather. The historical story that we learned in school talks about the Jewish narrative only, it doesn’t bring in the Palestinian narrative. We never had two sides of the story. “freedom in my mind” Nawal Hassan Slemiah. We teach the women how to be independent. It’s hard for women to leave their homes without education. Even with education, it’s hard to get jobs because there is no money to pay them. So this work, they can do it. Embroidery is very traditional work, especially for women from the villages. When we are 13 or 14, we have to prepare things for our wedding, like 30 cushion covers, things for the table, for the bed, for the wall, we have to prepare all these things by ourselves. The idea first came to me because I needed just one shekel and it was hard to get. “It always cuts you somewhere.” Khulud. “Normal, but not normative” Talma Bar-Din. “my little world” Fadia Andrawis. Yeaah, there is a pressure for me to get married. My grandmother, when I visit her, she kills me. Yallah! Yallah! (laughs)“Get off!” I say all the time. “It’s an inner pushiness.” Tsila Lee. Nobody said anything, but you just grew up and you knew: Don’t ask your parents questions. Because those people went through such hardship in life. “Another side of my life”