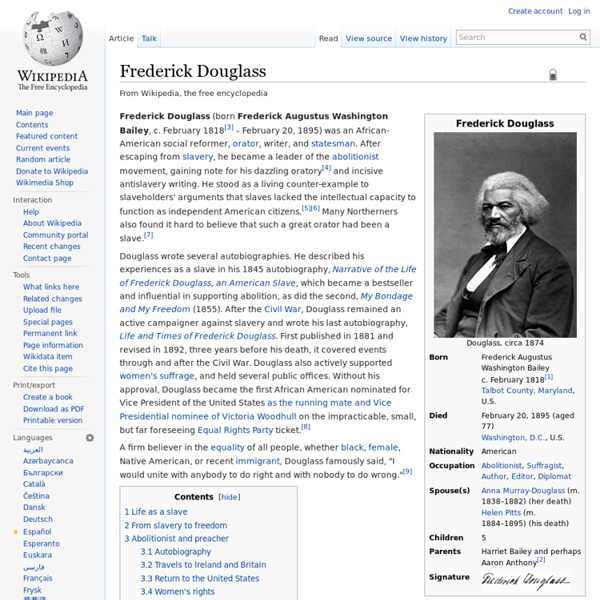 Frederick Douglass (born Frederick Augustus Washington Bailey, c. February 1818[3] – February 20, 1895) was an African-American social reformer, orator, writer, and statesman. After escaping from slavery, he became a leader of the abolitionist movement, gaining note for his dazzling oratory[4] and incisive antislavery writing. He stood as a living counter-example to slaveholders' arguments that slaves lacked the intellectual capacity to function as independent American citizens.[5][6] Many Northerners also found it hard to believe that such a great orator had been a slave.[7] A firm believer in the equality of all people, whether black, female, Native American, or recent immigrant, Douglass famously said, "I would unite with anybody to do right and with nobody to do wrong Life as a slave Douglass around 29 years of age. WikiMiniAtlas The exact date of Douglass's birth is unknown. He spoke of his earliest times with his mother: From slavery to freedom Abolitionist and preacher Autobiography Related:  A diversity of voices • freepachamama

Narrative of the Life of Frederick Douglass, an American Slave Narrative of the Life of Frederick Douglass is a memoir and treatise on abolition written by famous orator and former slave Frederick Douglass. It is generally held to be the most famous of a number of narratives written by former slaves during the same period. In factual detail, the text describes the events of his life and is considered to be one of the most influential pieces of literature to fuel the abolitionist movement of the early 19th century in the United States. Narrative of the Life of Frederick Douglass encompasses eleven chapters that recount Douglass' life as a slave and his ambition to become a free man. Chapters 1–4[edit] Douglass begins by explaining that he does not know the date of his birth (February 3, 1818), and that his mother died when he was 7 years old. Chapters 5–7[edit] At this point in the Narrative, Douglass is moved to Baltimore, Maryland. Chapters 8–9[edit] Chapters 10–11[edit] While under the control of Mr. Publication history[edit] [edit] See also[edit]

Transition Towns and Cities Emerge in the US Too Transition City LA Just One of ManyIt looks like it may have been almost a whole month since I last wrote about Transition Towns — covering the arrival of the Transition movement in Japan, and the incredible growth of Transition Towns in New Zealand. I make no secret about it, I'm a huge fan of this community-lead response to peak oil and climate change. When discussing Transition Towns here in the US, it's fairly common to hear folks ask whether something that started from small towns in the UK and Ireland can really work in such an oil dependent culture as the United States, and especially the big cities. "For our first event, we held a screening of "The End of Suburbia," together with a community discussion. It was so wonderful to get all these people together. The group also read a Letter to LA from Rob Hopkins himself, which laid out the reasons why their work is so vital and so important. "I would suggest you don't call what you are doing Transition Town LA.

Narrative of the Life of Frederick Douglass, 1845 (ebook) Awakening with Suzanne Lie Transmuting Gaia’s Core Dear Arcturians: I have many questions, but I know the answers are inside and I got lost in the third dimension again. I had this meeting that I was looking forward to and I got busy. I got busy again and I missed out, and I wonder how many things I miss out on because I’m so busy - so busy in the 3D world doing this right thing, this good thing, this important thing. My focus is on outside – on the outside world that I’m trying to see beyond. Arcturians Our beloved Suzelle we speak to you within your very same voice, therefore you know that we are within you and that we are speaking through you - for we are using that body in which you have often become lost. Do you see how when you allow us to come into you – us being the higher expressions of you – for you and us are third-dimensional terms? There she is she sees us now. But you do not need these mechanical devices. Feel that you nestled inside your Earth vessel. Feel yourself now, here, within the Core of Gaia.

Frederick Douglass Biography (video) Famed 19th-century author and orator Frederick Douglass was an eminent human rights leader in the anti-slavery movement and the first African-American citizen to hold a high U.S. government rank. Synopsis Abolitionist leader Frederick Douglass was born into slavery sometime around 1818 in Talbot County, Maryland. He became one of the most famous intellectuals of his time, advising presidents and lecturing to thousands on a range of causes, including women’s rights and Irish home rule. Life in Slavery Frederick Augustus Washington Bailey was born into slavery in Talbot County, Maryland, around 1818. Frederick Douglass was eventually sent to the Baltimore home of Hugh Auld. It was through reading that Douglass’s ideological opposition to slavery began to take shape. With Douglass moving between the Aulds, he was later made to work for Edward Covey, who had a reputation as a "slave-breaker.” Freedom and Abolitionism Douglass tried to escape from slavery twice before he succeeded. Videos

Internet World Stats - Usage and Population Statistics Frederick Douglass Frederick Douglass stood at the podium, trembling with nervousness. Before him sat abolitionists who had travelled to the Massachusetts island of Nantucket. Only 23 years old at the time, Douglass overcame his nervousness and gave a stirring, eloquent speech about his life as a slave. Douglass would continue to give speeches for the rest of his life and would become a leading spokesperson for the abolition of slavery and for racial equality. The son of a slave woman and an unknown white man, "Frederick Augustus Washington Bailey" was born in February of 1818 on Maryland's eastern shore. Douglass spent seven relatively comfortable years in Baltimore before being sent back to the country, where he was hired out to a farm run by a notoriously brutal "slavebreaker" named Edward Covey. On January 1, 1836, Douglass made a resolution that he would be free by the end of the year. Always striving to educate himself, Douglass continued his reading. previous | next

Narrative of the Life of Frederick Douglass Book Review for teens by MirandaP97, August 19, 2013 Yes, I am a teen myself, and if you HAVE to read this, then do so, but if you don't have to, then don't read it...it is incredibly boring...I had to read it for my English class...horrible book...unless you like narratives...then to you...ENJOY!!! It is hard to understand in some parts, but if you have ever read Fahrenheit 451, then it's about that bad... Actually a good book by BellaTheGod, November 20, 2013 No doubt, I thought it was gonna be super boring and I was gonna hate it, but to the contrary, I actually REALLY liked it. wow such Douglass much history

Narrative of the Life of Frederick Douglass (Audiobook) <div style="padding:5px; font-size:80%; width:300px; background-color:white; margin-left:auto; margin-right:auto; border:1px dashed gray;"> Internet Archive's<!--'--> in-browser audio player requires JavaScript to be enabled. It appears your browser does not have it turned on. 12 - Chapter 10 LibriVox recording of the Narrative of the Life of Frederick Douglass. Narrative of the Life of Frederick Douglass is a memoir and treatise on abolition written by famous orator and ex-slave, Frederick Douglass. For more free audio books or to become a volunteer reader, visit LibriVox.org. For further information, including links to online text, reader information, RSS feeds, CD cover or other formats (if available), please go to the LibriVox catalog page for this recording. M4B audiobook of Complete Book This audio is part of the collection: The LibriVox Free Audiobook CollectionIt also belongs to collections: Audio Books & Poetry; Community Audio Creative Commons license: Public Domain