You are not your character; so how do you find the character's voice?

The 7 Narrator Types: and You Thought There Were Only Two! - bekindrewrite. Photo by Charles Hutchins There are all kinds of narrators–going way beyond simple first or third person. 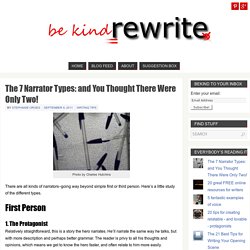 Here’s a little study of the different types. First Person 1. The Protagonist Relatively straightforward, this is a story the hero narrates. …I take up my pen in the year of grace 17–, and go back to the time when my father kept the “Admiral Benbow” inn, and the brown old seaman, with the saber cut, first took up his lodging under our roof. 2.

Someone close to the protagonist, but not the main hero. “Dr. Third Person Third person omniscient This type knows all, peeking into the lives of major and minor characters, reading everyone’s thoughts. Third person limited This type knows only what the main character, or characters, know. The following types can fall into either omniscient or limited: 3. A detached third person narrator sticks to telling the story, and never inserts his own opinions—never slips in an “I” or a “me” except in direct dialogue. 4. Somewhere in Between 5. 6. “Lemony?” 7. Choosing a Viewpoint Character. In most cases, the viewpoint character of a novel (the one whose eyes we witness the events through) is the same person as the novel's protagonist (the central character, or the one the whole novel is "about"). 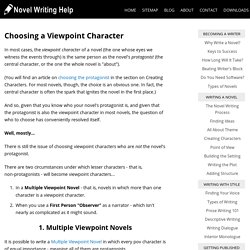 Finding Your Writing Voice. Put simply, a writing voice is what makes Hemingway sound like Hemingway and Stephen King like Stephen King. 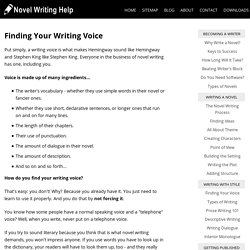 Everyone in the business of novel writing has one, including you. Voice is made up of many ingredients... The writer's vocabulary - whether they use simple words in their novel or fancier ones.Whether they use short, declarative sentences, or longer ones that run on and on for many lines.The length of their chapters.Their use of punctuation.The amount of dialogue in their novel.The amount of description.And so on and so forth... Writability: Voice: You Are Not Your Characters. For much of my journey as a writer, I was aware of this thing called voice. 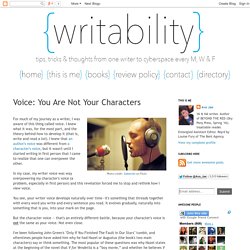 I knew what it was, for the most part, and the theory behind how to develop it (that is, write and read a lot). Finding Your Character’s Voice - The Loft Literary Center. During a summer workshop I recently taught, a student lamented that all the characters in her short story were too similar. 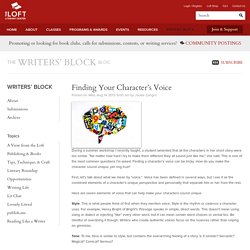 “No matter how hard I try to make them different they all sound just like me,” she said. This is one of the most common questions I’m asked. How Do You Find a Character's Voice? Finding a character’s voice and personality comes easy to some, and with difficulty to others. 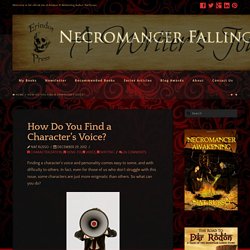 In fact, even for those of us who don’t struggle with this issue, some characters are just more enigmatic than others. So what can you do? In a couple of #writetip auto-tweets that I send out periodically (we’ll debate the merits of auto-tweeting later) I mention a process of interviewing your characters to get at the heart of that person’s character traits. I’ve received an enormous response to those tweets asking me to go into some detail, so I decided to write today’s blog entry on that subject.

How to Find Your Character’s Voice. This week’s video touches on a few of the differences between authorial and character voices and offers suggestions for finding a unique sound for each character’s voice. 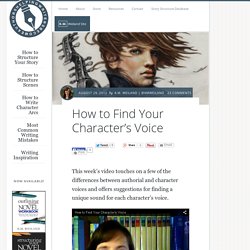 Agents agree: the single most important factor in getting their attention is a strong, unique, and personality-heavy narrative voice. Voice is what defines both your story and your narrating character. Think of voice as kind of like your story’s unique fingerprint. If your book were a band, this would be the sound that makes it recognizable. So, if narrative voice is so important, how are you going to go about creating one? Getting Into Character: Fiction Writing Exercises. Fiction writing exercises for developing characters. 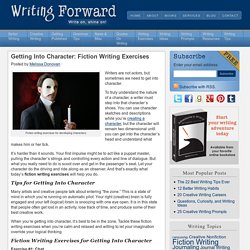 Writers are not actors, but sometimes we need to get into character. Adding Strong Voice to Your Writing. How Do You Teach Voice in Writing: It's Easier Than You Think. Written by: Trent Lorcher • edited by: SForsyth • updated: 4/2/2012 Out of all the writing traits, voice presents the biggest challenge for students and teachers. 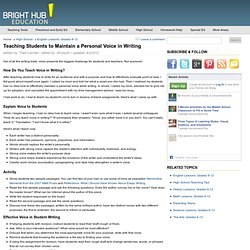 Not anymore! Writing Tips #85: Nine Kick-Ass Excercises to Find... Writing Exercise: Character and Voice. Developing our writing voice for a story or a character can be incredibly difficult; it can also be quite rewarding when we get it right. 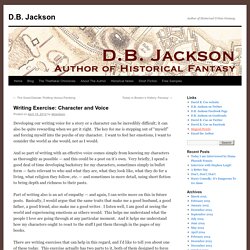 The key for me is stepping out of “myself” and forcing myself into the psyche of my character. I want to feel her emotions, I want to consider the world as she would, not as I would. And so part of writing with an effective voice comes simply from knowing my characters as thoroughly as possible — and this could be a post on it’s own. Very briefly, I spend a good deal of time developing backstory for my characters, sometimes simply in bullet form — facts relevant to who and what they are, what they look like, what they do for a living, what religion they follow, etc. — and sometimes in more detail, using short fiction to bring depth and richness to their pasts.

Some may even wonder, what is voice in writing? A writer’s voice is something uniquely their own. It makes their work pop, plus readers recognize the familiarity. You would be able to identify the difference between Tolkien and Hemingway, wouldn’t you?