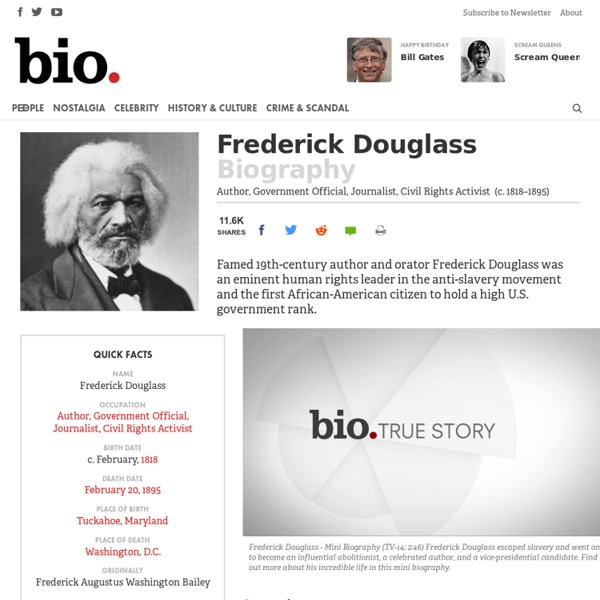 Famed 19th-century author and orator Frederick Douglass was an eminent human rights leader in the anti-slavery movement and the first African-American citizen to hold a high U.S. government rank. Synopsis Abolitionist leader Frederick Douglass was born into slavery sometime around 1818 in Talbot County, Maryland. Life in Slavery Frederick Augustus Washington Bailey was born into slavery in Talbot County, Maryland, around 1818. Frederick Douglass was eventually sent to the Baltimore home of Hugh Auld. It was through reading that Douglass’s ideological opposition to slavery began to take shape. With Douglass moving between the Aulds, he was later made to work for Edward Covey, who had a reputation as a "slave-breaker.” Freedom and Abolitionism Douglass tried to escape from slavery twice before he succeeded. Once he had arrived, Douglass sent for Murray to meet him in New York. Following the publication of his autobiography, Douglass traveled overseas to evade recapture. Family Life and Death Related:  Esclavage

9 Frederick Douglass Facts For Kids | Navajo Code Talkers navajocodetalkersadmin on December 25, 2014 - 10:00 am in Fun Facts for Kids Slavery is a part of history that is painful to remember, but there were many heroes along the way that bravely fought for the rights of all no matter race or color. Frederick Douglass was a prominent figure in the Abolitionist Movement, which was the fight to end slavery. He was born a slave and has a inspiring story that tells of the struggles he faced during his lifetime due to the color of his skin. Frederick Douglass is regarded as one of the most influential people in the fight to end slavery. Here is a closer look at his background and a few little known facts surrounding his life: What Were His Contributions to the Fight to End Slavery? 1. 2. Most Prominent Black Leader of the 19th Century 3. Welcomed the Civil War 4. How Was He Remembered? 5. Born Frederick Augustus Washington 6. Supporter of the Women’s Rights Movement 7. North Star 8. Vice President Nomination 9.

Frederick Douglass - Black History An abolitionist, writer and orator Frederick Douglass was the most important black American leader of the nineteenth century. Born Frederick Augustus Washington Bailey on Maryland’s Eastern Shore, he was the son of a slave woman and, probably, her white master. Upon his escape from slavery at age twenty, he adopted the name of the hero of Sir Walter Scott’s The Lady of the Lake. Douglass immortalized his years as a slave in Narrative of the Life of Frederick Douglass, an American Slave (1845). This and two subsequent autobiographies, My Bondage and My Freedom (1855) and The Life and Times of Frederick Douglass (1881), mark his greatest contributions to American culture. Douglass’s life as a reformer ranged from his abolitionist activities in the early 1840s to his attacks on Jim Crow and lynching in the 1890s. Rhetorically, Douglass was a master of irony, as illustrated by his famous Fourth of July speech in 1852: “This Fourth of July is yours, not mine.

Esclaves en Amérique | Récits autobiographiques d'anciens esclaves 1760-1865 Frederick Douglass History >> Biography >> Civil Rights for Kids Occupation: Abolitionist, civil rights activist, and writer Born: February 1818 in Talbot County, Maryland Died: February 20, 1895 in Washington, D.C. Best known for: Former slave who became an advisor to the presidents Biography: Where did Frederick Douglass grow up? Frederick Douglass was born on a plantation in Talbot County, Maryland. His mother was a slave and when Frederick was born, he became a slave, too. Life as a Slave Life as a slave was very difficult, especially for a child. Learning to Read Around the age of twelve, his master's wife, Sophia Auld began to teach Frederick the alphabet. Once Douglass had learned to read, he read newspapers and other articles about slavery. Escape to Freedom In 1838, Douglass carefully planned his escape. Abolitionist In Massachusetts, Douglass met with people who were against slavery. Author Douglass wrote down his story of slavery in an autobiography called Narrative of the Life of Frederick Douglass.

Facts | Frederick Douglass Heritage Historical facts about the life of Frederick Douglass Frederick Douglass was born Frederick Augustus Washington Bailey.He was the first African American citizen to hold a high U.S. government rank.He is best known as a civil rights leader in the abolition movement and for advocating education for the advancement of African Americans.Through his escape he changed his last name from Bailey to Johnson to Douglass but he never changed his first name.His mother was Harriet Bailey, a slave, his father was a white man believed to be his master Aaron Anthony. Read early life.His mother was the only colored woman in Tuckahoe who could read.Grandmother Betsy Bailey was held in high esteem as an old settler and a nurse.He saw his mother 4 or 5 times in his life. She had to walk 12 miles back and forth to see him and could only do so at night.Douglass was taught the alphabet by Sophia Auld. When she stopped teaching him he asked poor white neighbor children to teach him in exchange for bread.

Olaudah Equiano If it weren’t for “The Interesting Narrative of the Life of Olaudah Equiano”, or “The Gustavus Vassa”, the world may not have known about Equiano from a closer perspective. Both these books were written by the author/poet himself, where he talks about his early life and coming of age experience. Olaudah Equiano was somewhere around 1745 (the exact date is unknown and mostly misrepresented in most of the biographies), in “Eboe” – Guinea. In different areas of modern Nigeria, “Eboe” is known as Igbo or Ibo. Equiano wasn’t meant to live the life of a slave because his native African family were living as a free souls. He was the son of a tribal chief, so freedom couldn’t be in any better form for him. At the age of 11, young Equiano was playing in the local vicinity of his tribe, when out of nowhere; a group of hooligans kidnapped him and his sister. Olaudah Equiano’s biography is present in different forms. The Summer of 1754: The naval life wasn’t that bad for young Olaudah Equiano.