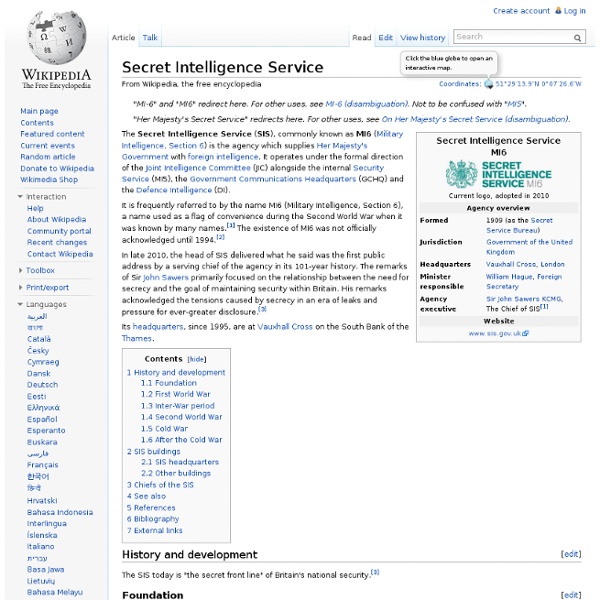 It is frequently referred to by the name MI6 (Military Intelligence, Section 6), a name used as a flag of convenience during the First World War when it was known by many names.[2] The existence of MI6 was not officially acknowledged until 1994.[3] In late 2010, the head of SIS delivered what he said was the first public address by a serving chief of the agency in its 101-year history. The remarks of Sir John Sawers primarily focused on the relationship between the need for secrecy and the goal of maintaining security within Britain. His remarks acknowledged the tensions caused by secrecy in an era of leaks and pressure for ever-greater disclosure.[4] Since 1995, the SIS headquarters, have been based at Vauxhall Cross on the South Bank of the River Thames. History and development[edit] Foundation[edit] Its first director was Captain Sir George Mansfield Smith-Cumming, who often dropped the Smith in routine communication. First World War[edit] Inter-War period[edit] Second World War[edit]

Her Majesty's Diplomatic Service Her Majesty's Diplomatic Service (HMDS) is the diplomatic service of the United Kingdom of Great Britain and Northern Ireland, dealing with foreign affairs, as opposed to the Home Civil Service, which deals with domestic affairs. Its approximate 16,000 employees work for the Foreign and Commonwealth Office in London as well as 240 posts (embassies and other offices) around the world, alongside locally employed staff and members of other government departments. The Permanent Under-Secretary of State for Foreign and Commonwealth Affairs is also the Head of the Diplomatic Service. The Foreign Service, which originally provided civil servants to staff the Foreign Office, was once a separate service, but it amalgamated with the Diplomatic Service in 1918. See also[edit] Further reading[edit] About the Civil Service Sir Peter Ricketts References[edit]

Australian agriculture has 'supermodel syndrome': Marketing expert - ABC Rural Updated Fri 13 Jun 2014, 12:08pm AEST Australian agriculture is suffering from a ‘supermodel syndrome’ and urgently needs to rethink its approach to marketing and selling itself. That is the view of leading advertising expert Craig Davis, who has worked with brands like Toyota and Coca-Cola. “One of the big issues is that Australia is overconfident,” said Mr Davis. “I call it the ‘supermodel syndrome’. “People think that the natural gifts that they are endowed with being in Australia automatically translate into desire and demand for Australian produce overseas.” Mr Davis says the world supports Australian agriculture’s view of itself as clean and green, but the industry needs to shift its focus away from large-scale production. “One of the legacies of Australian agriculture is that everything has to be about scale, everything has to be big. “The future, to me, is very much about premium niches.” “We at best can feed 150 million people. “It’s all about unification of message and purpose.”

HSC Manannan HSC Manannan is a 96-metre (315 ft) wave-piercing high-speed catamaran car ferry built in Tasmania in 1998. After commercial service in Australia and New Zealand, she was chartered to the US Military as USS Joint Venture (HSV-X1). Now owned and operated by the Isle of Man Steam Packet Company, she mainly provides a seasonal service between Douglas and Liverpool. Early history[edit] [edit] In 2001, she was commissioned as USS Joint Venture (HSV-X1), serving for five years with the United States Armed Forces. In 2003, Joint Venture was assigned to Operation Enduring Freedom in the Horn of Africa.[3] She operated as a fast transport in support of the Combined Joint Task Force and performing a variety of tasks, such as transporting and supplying troops at high speed over long distances, operating as a mobile command centre, working close inshore, and operating as a helicopter carrier. At the end of the five year charter, she was handed back to Incat in early 2006. Service[edit] Lower deck

International Force for East Timor Major General Peter Cosgrove (right) Australian commander of the United Nations backed peace keeping operation (INTERFET) to East Timor. Commander INTERFET, MAJ GEN Cosgrove joins hands with the new East Timor leadership during a celebration to mark the official handover from INTERFET to UNTAET. Background[edit] Indonesia invaded East Timor in 1975 and annexed the former Portuguese colony. The annexation was recognised by few nations (including Australia at that time) and was resisted by many East Timorese. Foreign powers placed high importance on good relations with Indonesia and were largely reluctant to assist a push for independence. News of the proposal provoked a violent reaction in East Timor from pro-Indonesian militia. East Timor Special Autonomy Referendum[edit] The United Nations Mission in East Timor (UNAMET) was established to organize and conduct a referendum on the question of independence. United Nations resolution[edit] Indonesia, in dire economic straits relented.

HSC Hai Xia Hao Hai Xia Hao is a passenger / vehicle ferry operated by Fujian Cross Strait Ferry between Taichung and Pingtan Island. The vessel is a high speed catamaran built by the Tasmanian shipbuilder Incat. History[edit] Hai Xia Hao was constructed for Bay Ferries as The Cat and operated seasonally in from 2002–2005 in international service from May to October across the Gulf of Maine between Yarmouth, Nova Scotia and Bar Harbor, Maine. Starting in the winter of 2003–2004, Bay Ferries began to operate the vessel as a wet-lease charter during the off-season for the Gulf of Maine service, when the INCAT 046 had previously been laid up. After the 2005 demise of the Yarmouth-Bar Harbor route's competitor, Scotia Prince Cruises, using the M/V Scotia Prince between Yarmouth-Portland, Maine, Bay Ferries secured this additional route for The Cat beginning in May 2006. In 2011 The Cat was purchased by Fujian Cross Strait Ferry. Vessel characteristics[edit] Sisterships[edit] References[edit]

Australia Network Australia Network, originally Australia Television International and later ABC Asia Pacific, is a free-to-air international satellite television service operated by the Australian Broadcasting Corporation since 2006.[2] The television and online service broadcasts 24 hours a day on 7 days a week, to approximately 44 countries in Asia, the Pacific and the Indian sub-continent. The channel broadcasts a mix of programming, including lifestyle, drama, sports, English-language learning programs, children's programming and news and current affairs. History[edit] Origins[edit] Funding cuts made in the 1997-1998 federal budget, and recommendations made in the Mansfield Report, meant that control of Australia Television was handed over to the Seven Network in 1998.[6] Under Seven's direction the channel continued to receive federal funding, and carry some ABC News.[6] 2002-2006 - As ABC Asia Pacific[edit] 2006-present - As Australia Network[edit] Programming[edit] News and current affairs[edit]

Environment See our initiatives Reducing the negative impacts of climate change and other environmental factors is a key pillar in promoting economic development. The environment is integral to the economic prosperity of many developing countries, accounting for 30 per cent of the wealth of least developed countries. Activities to improve environmental outcomes can directly improve the livelihoods of those that depend on the environment for their livelihoods and food security. The aid program supports environmental activities in some 23 countries and four regions. Results achieved as part of these activities are detailed against each initiative or country program. In 2010-11, Australia's aid program, through the Global Environment Facility (GEF) [external website] contributed to over 600 projects in 117 countries addressing issues such as land degradation, biodiversity, and climate change and promoting sustainable development pathways and livelihoods. Achieving more than just environment outcomes

Peace at last for souls lost in war Historians Derrill de Heer (left) and Bob Hall. Photo: Alex Ellinghausen THEY are called wandering souls, and there are 3906 of them, mourned by families who don't know where they are buried. Until they know, they believe the spirits of the dead will wander in torment. But Australians know, because they killed the 3906 and logged where they buried them in fields, jungles and rubber plantations. When the war was over, six Australians were still missing. Historian Derrill de Heer in Vietnam with South Vietnamese soldiers in Hoi My village in 1970. Two weeks ago, Foreign Minister Kevin Rudd was in Ho Chi Minh City, where he thanked Vietnamese authorities for helping find the lost Australians. Advertisement Australian researchers - among them former soldiers who buried the dead - think we'll only close this chapter once we've helped Vietnam find its wandering souls. The researchers know exactly where the bodies are. Dead Vietnamese soldiers are documented before burial. De Heer agrees.

Young Artists Shine At Hong Kong’s Asia Contemporary Art Show : www.newsstandonline.net NewsStandOnline.Net (9-October-2013): With artwork sprawled on queen-sized beds, hung in front of television sets and even placed on toilet counters, Hong Kong’s Asia Contemporary Art Show has an unusual take on what constitutes an art gallery. Hosted in a luxury hotel, the bi-annual fair caters for emerging artists hoping to break into global markets and the unorthodox venue is an attempt to reduce costs in a city fast becoming known as an international arts hub but where sky-high rents pose a challenge for artists and galleries. Thousands attended the four-day show, which emphasizes young and mid-career artists and is the city’s second-largest art fair after the Hong Kong edition of the prestigious Art Basel. Collectors moved from room to room inside the five-star JW Marriott hotel where more than 70 galleries showcased paintings, sculptures and photography from around the Asia region and the world. “In Hong Kong, a lot of people come and see the artworks.

United Nations Transitional Administration in East Timor The United Nations Transitional Administration in East Timor (UNTAET) provided an interim civil administration and a peacekeeping mission in the territory of East Timor, from its establishment on October 25, 1999,[1] until its independence on May 20, 2002, following the outcome of the East Timor Special Autonomy Referendum. A coalition of nations sent troops to support the peace keeping mission. The forces were led by Australia, which provided the largest contingent and the out of theatre base for operations, supported by New Zealand, who sent the second largest contingent, and took responsibility for the more volatile southern half of the main border, France, whose special forces joined the ANZACs on the first day, as well as contingents from Argentina, Brazil, Chile, Denmark, Fiji, Ireland, Japan, Malaysia, Russia, Singapore, South Korea, Thailand, the Philippines, Portugal, Sweden, and the United Kingdom. Initial administrative structures[edit] First Transitional Administration[edit]