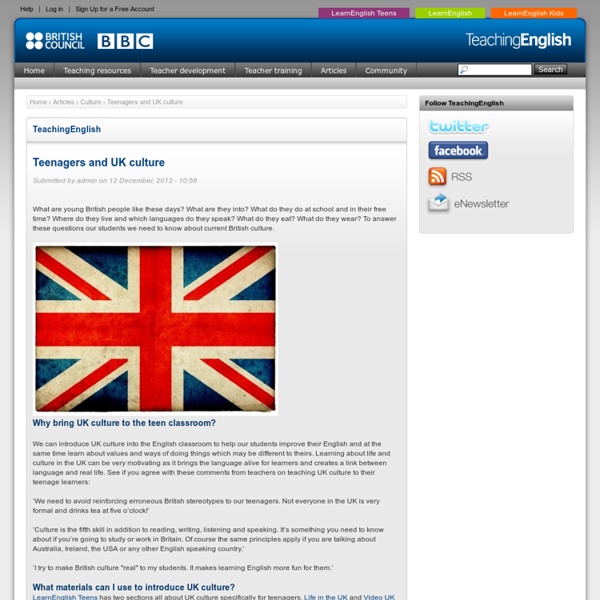 Why bring UK culture to the teen classroom? We can introduce UK culture into the English classroom to help our students improve their English and at the same time learn about values and ways of doing things which may be different to theirs. Learning about life and culture in the UK can be very motivating as it brings the language alive for learners and creates a link between language and real life. See if you agree with these comments from teachers on teaching UK culture to their teenage learners: ‘We need to avoid reinforcing erroneous British stereotypes to our teenagers. Not everyone in the UK is very formal and drinks tea at five o’clock!’ ‘Culture is the fifth skill in addition to reading, writing, listening and speaking. ‘I try to make British culture "real" to my students. What materials can I use to introduce UK culture? Life in the UK In this section teenagers can read about topics with a British connection. Learning the language doesn’t automatically mean learning the culture.

Human Rights This is the preparation material for an English conversation lesson about human rights. Human rights are rights inherent to all human beings, whatever our nationality, place of residence, sex, national or ethnic origin, colour, religion, language, or any other status. We are all equally entitled to our human rights without discrimination. Universal human rights are often guaranteed by the law of a country, general principles and other sources of international law. International human rights laws give down obligations of Governments to act in certain ways or to refrain from certain acts, in order to promote and protect human rights and freedoms of individuals or groups. Video about Human Rights

FASTEN SEAT BELTS 2 - Travel by Continent - Europe Fasten Seat Belts, a light hearted guide to avoid misunderstandings while travelling. An innovative way to learn languages and pick up cultural tips. Travel by Continent / Europe In the Netherlands, it is the custom on someone's birthday to... Lost Property This EFL lesson is designed around a beautiful short film titled Lost Property by Asa Lucander. Students do a dictation, work out meanings of the verb ‘lose’, speak about lost items, watch a trailer and short film, and write a story. Language level: Intermediate (B1) – Upper Intermediate (B2) Learner type: Teens and adults Time: 90 minutes Activity: Dictation, working out meanings of the verb ‘lose’, watching a trailer and short film, speaking and writing a story

Britain is GREAT The GREAT Britain campaign showcases the very best of what Britain has to offer. We welcome the world to visit, study and do business with the UK. Business Best Resources For Teaching About Rosa Parks & 60th Anniversary Of The Montgomery Bus Boycott Thanks to Teaching Tolerance, I just learned that December 4th will be the 60th anniversary of the Montgomery Bus Boycott. I’m sure there will be lot of new resources becoming available in the next few weeks, and I’m also sure that there are plenty that I’m not including in the first edition of this post. Please let me know what I’m missing. British Royal Family Arms Royal Coat of Arms The main element of the Royal Arms is the shield which is divided into four quarters (see diagram). The three golden lions on a red background, symbolising England, occupy the first and fourth quarters. The Arms of Scotland, a red lion rearing on its hind legs inside a red border, are in the second quarter, and the Arms of Ireland's golden harp with silver strings on a blue background - are in the third quarter. The lion and the unicorn supporting the shield represent England and Scotland respectively.