Pub guide to London pubs and other pubs in the UK. 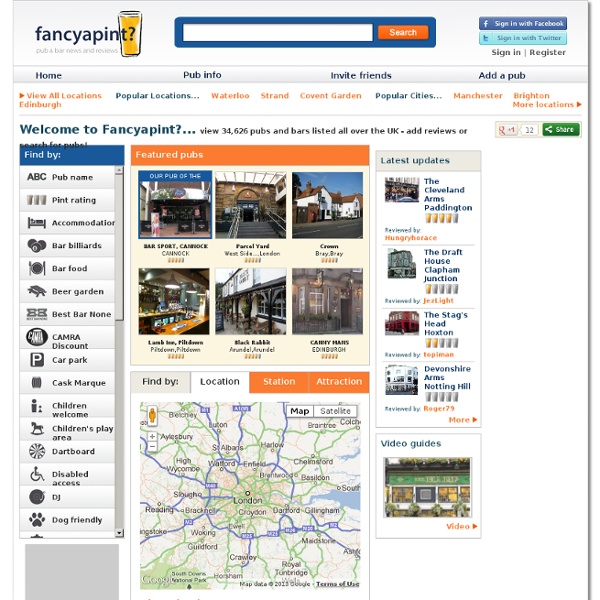 Plnnr - plan the perfect trip, automatically! 20 free attractions in London Who cares if London's hotels and restaurants tend to be on the expensive side? No city in the world has more free stuff to do. In addition to world-class museums without a ticket admission, you get the parks, canal walks, super markets (Portobello Road Market at Notting Hill Gate, Camden Market at Chalk Farm Rd, wonderful Columbia Road Flower Market at Gosset St in East London etc) and maybe some royal-spotting, and you can fill a life. Here's the mere start of the free list: 1. Around, more or less, since the 13th century, the Borough Market is stuffed with food-lovers and all you need for a memorable grab-and-go breakfast or lunch. 2. Hidden under Waterloo Bridge, the institute features four cinemas (not free) and the fun Mediatheque, where you can peruse DTV/film archives and watch for free. 3. Unreal; one of London's top attractions, and absolutely free. 4. The Palace of Westminster, home of 'Big Ben' (or Clock Tower), is a neo-Gothic wonder from the mid-19th century. 5. 6. 7. 8. 9.

LondonTown.com | Best London hotels, tickets, tours, maps and more ... 10 Irish Words You Should Know When Traveling Around the Emerald Isle | Ir... - StumbleUpon One of the great things about traveling to Ireland is that the Irish people speak English. Or at least most of them do! In fact, over a half million Irish claim to speak Irish, the native language, often referred to as “Gaelic” by visitors. Normally, you do not need to know any Irish language words in the course of staying at hotels or B&Bs, eating in restaurants, going shopping, or taking part in the conviviality of pubs. However, it is useful to know some Irish words when traveling around the countryside – because there are certain areas in Ireland where Irish is the everyday spoken language and signs on the roads are all in Irish. Gaeltacht – Region or district in Ireland where Irish (Gaelic) is the predominant language. TWO MORE TO ADD TO YOUR LIST from our editors…There are two words we’d add to the list as well… they are often used to label the “toilets” (the Irish don’t usually use the word “bathroom”)Mná = Women & Fir = MenWe wouldn’t want you walking into the wrong “restroom”!

Choice tramps: New Zealands top five hikes Jaw-dropping ... walking the Milford Track. Special New Zealand feature Rachael Oakes-Ash puts on her tramping boots and names the best hiking trails in New Zealand. 'Tramping' is the New Zealand term for trekking. 'Jandals' is the New Zealand term for thongs, but whatever you do, don't tramp in jandals. Advertisement You're likely to cross volcanic craters and glacial rainforests or find yourself knee-deep in warm crystal tidal waters with white sand between the toes. Here are New Zealand's five best hikes for keen trampers. 1. The beauty of this walk is that you're not tramping en masse: the track is guided in small groups of no more than 16. Expect to walk 17 kilometres on day one, around 14 on day two and around nine on day three, with easily marked trails and swinging bridges over wide river waters. A jet boat will appear to take trampers across a pristine lake and a helicopter flies trampers out on the last day with a spectacular ride into Milford Sound. 2. 3. 4. 5.

8 Destinations for the Solo Traveler (PHOTOS) As with everything else, traveling alone has its pros and cons. Pros: No scheduling conflicts, you can choose every meal, not to mention grab all the glory of travel triumphs (and pitfalls) all to yourself. Cons: Safety is paramount, and there is the ever lingering feeling of loneliness that can turn a fabulous, delicious dinner into a slow form of torture. But to let those totally surmountable problems stop you from lounging in Iceland's thermal baths, tucking into a heaping helping of poutine, or pensively staring out on stunning fjords seems ill-advised. Ask the hotel's concierge for a restaurant recommendation, for example, and sit at the bar. Certain destinations are better for solo travelers than others, though, depending on language barriers, easy-to-understand currency, built-in activities, or food so good you'll forget you're sitting there on your own. Whether you're an outdoor adventurer or a culinary explorer, there are amazing trips just waiting for you (and you alone).

The London Street Food Guide - Compiled by Victoria Philpott Street food in London is tasty, cheap and plentiful – when you know where to look. If you’re looking for cheap eats London is the place to be. The creativity behind our street food stalls when it comes to cooking and serving is inspiring. There really is something for everyone. We’ve asked 40 of the best food and travel bloggers about their top tip on where to eat in London and this is what they said… 1. “Head to Exmouth Market in Clerkenwell. 2. “Street food is sizzling in London and there’s loads to choose from whether you want simple hot dogs slathered in mustard and onions, every kind of burger imaginable, speck dumplings, rib meat rolls or salted caramel ice cream. One of my favourite morning stop-offs is Brockley Market for its range of talented traders selling delicious food and the real sense of community. 3. 4. “If you fancy a hearty vegetarian burger then you have to visit The Veggie Table at Borough Market in London Bridge. 5. 6. 7. 8. 9. 10. 11.

Kilchurn Castle Feature Page on Undiscovered Scotland Many Scottish castles tell the story of the changing times they lived through. It is quite common to find a castle that started life as a stronghold before being converted over the years to first a comfortable, then a showcase, home: or which was abandoned in favour of a nearby fine house when the struggle of conversion became too much trouble, and defence was no longer a priority. Kilchurn Castle evolved in a slightly different way. It was built in about 1450 by Sir Colin Campbell, first Lord of Glenorchy, and it started life as a five storey tower house with a courtyard defended by an outer wall. Not often appreciated today is that when built, Kilchurn was on a small island in Loch Awe scarcely larger than the castle itself: you can see this on part of a map drawn by Timothy Pont in the late 1500s here. Kilchurn's development started to take an unusual turn in 1681. The castle is possibly best appreciated by walking around the headland on which it stands.