Ballot boxes from Barra arrive by boat #GE2017 #bbcelection. Here's a look at how the news covers the excitement of election day #BBCElection. *****From rust belt to mill towns: a tale of two voter revolts. The Red Shed is a simple, one-storey wooden building in Wakefield that houses a meeting place and a bar. 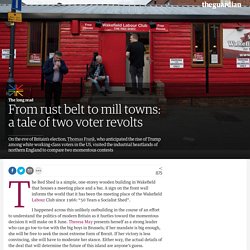 A sign on the front wall informs the world that it has been the meeting place of the Wakefield Labour Club since 1966: “50 Years a Socialist Shed”. I happened across this unlikely outbuilding in the course of an effort to understand the politics of modern Britain as it hurtles toward the momentous decision it will make on 8 June. Theresa May presents herself as a strong leader who can go toe-to-toe with the big boys in Brussels; if her mandate is big enough, she will be free to seek the most extreme form of Brexit. If her victory is less convincing, she will have to moderate her stance.

Either way, the actual details of the deal that will determine the future of this island are anyone’s guess. And so I have come to this city of 76,000 in West Yorkshire to see how this country on the brink compares to my own. And so it came to pass. Londoner fascinated to hear about life in ‘the regions’ Europe's Purchasing Power Density, 2016. Further proof that in the past month we seem to have regressed back to the 1970s. Animated #map morphs #UK by regional #GDP and highlights the importance of #London for national #economy. @galka_max. Inheritances and inequality across and within generations - Institute For Fiscal Studies - IFS.

Today’s elderly have much more wealth to bequeath than their predecessors, primarily as the result of rising homeownership rates and rising house prices. 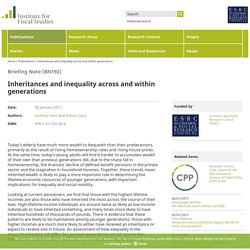 At the same time, today’s young adults will find it harder to accumulate wealth of their own than previous generations did, due to the sharp fall in homeownership, the dramatic decline of defined benefit pensions in the private sector and the stagnation in household incomes. Together, these trends mean inherited wealth is likely to play a more important role in determining the lifetime economic resources of younger generations, with important implications for inequality and social mobility. Looking at current pensioners, we find that those with the highest lifetime incomes are also those who have inherited the most across the course of their lives.

The growing importance of inherited wealth Current pensioners: who inherited? Younger generations: who will inherit? Excellent map from Ian Warren @election_data highlighting that rail fares very much a SE issue. Most don't live/work in Lonodn. Half UK budget deficit 'is down to job destruction in older industrial areas'

Stats, Maps n Pix: City Footprints. Earlier in the week I posted a map of London's 'economic hinterland' on Twitter because I've been working with commuting data and wanted to see what the economic footprint of London looks like. 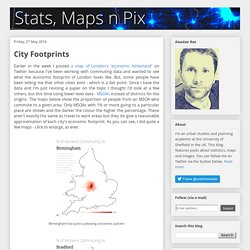 But, some people have been telling me that other cities exist - which is a fair point. Since I have the data and I'm just revising a paper on the topic I thought I'd look at a few others, but this time using lower level data - MSOAs instead of districts for the origins. Stats, Maps n Pix: London+ (or, another way of looking at London) Just over six years ago, there was a bit of a fuss when a marketing campaign attempted to re-brand parts of Northamptonshire as 'North Londonshire' owing to the relative accessibility of places like Corby and Kettering for Central London commuting. 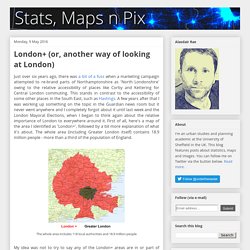 This stands in contrast to the accessibility of some other places in the South East, such as Hastings. A few years after that I was working up something on the topic in the Guardian news room but it never went anywhere and I completely forgot about it until last week and the London Mayoral Elections, when I began to think again about the relative importance of London to everywhere around it. Nine out of ten poorest areas in Northern Europe are in the UK. Social mobility report: Problems in coastal and rural communities challenge north-south divide. Social mobility problems are blighting England’s coastal and rural areas and wealthier regions too, a new report has found. 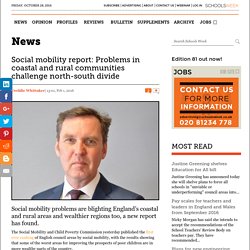 The Social Mobility and Child Poverty Commission yesterday published the first ever ranking of English council areas by social mobility, with the results showing that some of the worst areas for improving the prospects of poor children are in more wealthy parts of the country. It follows warnings by Ofsted about a concentration of under-performing schools in the north and midlands, and calls into question general rhetoric over a divide between the north and south. Looking back at Nissan’s 25 years of success. AS the Nissan plant approaches its landmark quarter of a century of car production, boss Kevin Fitzpatrick said recent announcements meant that history appeared to be repeating itself at the Sunderland plant. 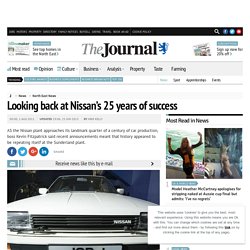 After winning the contract to produce the 100% electric Nissan Leaf – as well as the next generation Qashqai – it is not only looking to recruit more staff but is sending people to the Oppama plant near Yokohama in Japan to learn the required skills in developing the revolutionary model Leaf model. Oppama is the sister plant to Sunderland and was where, in 1985, the so-called ‘original 22’ were sent. These were the 22 supervisors – or “super foremen” – taken on to learn the way Nissan operated to pass on to those employed to work on Wearside. “It’s like old times,” said Kevin who was among the first 22.

“I kind of wish I was going with them.”