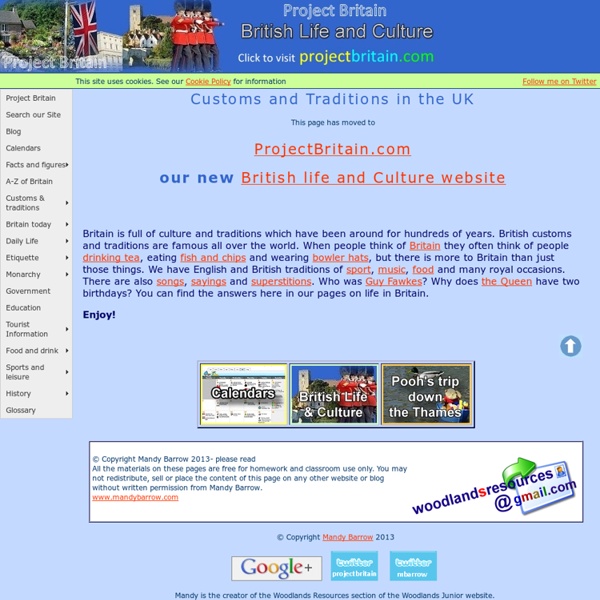 This page has moved to ProjectBritain.com our new British life and Culture website Britain is full of culture and traditions which have been around for hundreds of years. Enjoy! Related:  Great Britain • Great Britain

ProjectBritain.com - A resource of British Life and Culture in the UK by Woodlands Junior British Life and Culture in the UK - Woodlands Junior School Geography of the UK The official title of the UK is the United Kingdom of Great Britain and Northern Ireland . Great Britain (the formerly separate realms of England and Scotland, and the principality of Wales. ) Northern Ireland (also known as Ulster) Numerous smaller islands including the Isle of Wight, Anglesey, and the Scilly, Orkney, Shetland, and Hebridean archipelagos. The UK is an island nation in Western Europe just off the coast of France. The mainland areas lie between latitudes 49°N and 59°N and longitudes 8°W to 2°E. The UK lies between the North Atlantic Ocean and the North Sea, and comes within 35 km (22 miles) of the northwest coast of France, from which it is separated by the English Channel. Northern Ireland shares a 360 km international land boundary with the Republic of Ireland. The UK has a total area of approximately 245,000 km², almost a quarter-of-a-million square kilometres. The UK is made up of several islands. The UK is bordered by four seas: Lakes Find out more about UK Rivers

United Kingdom country profile - Overview 12 November 2014Last updated at 07:38 ET The United Kingdom is made up of England, Wales, Scotland and Northern Ireland. It has a long history as a major player in international affairs and fulfils an important role in the EU, UN and Nato. The twentieth century saw Britain having to redefine its place in the world. At the beginning of the century, it commanded a world-wide empire as the foremost global power. Two world wars and the end of empire diminished its role, but the UK remains an economic and military power, with considerable political and cultural influence around the world. Britain was the world's first industrialised country. The Palace of Westminster is home to one of the world's oldest parliaments Continue reading the main story At a glance Politics: Prime Minister David Cameron, from the centre-right Conservative Party, heads a coalition with the UK's third party, the Liberal Democrats. Country profiles compiled by BBC Monitoring Special Report: United Kingdom Direct Diversity